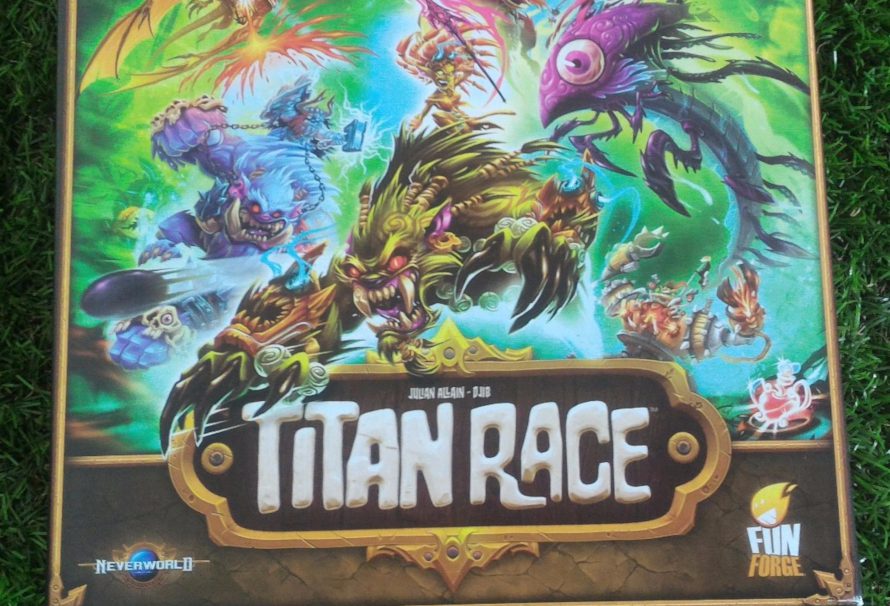 We have chosen Titan Race by FunForge, as our family-centric board game of the month due to its reminiscent gameplay style, overall accessibility in global market, and it’s easy to learn ruleset designed for family members of all ages.

At the beginning of the game, players select one of the six riders who remain fixed to their respective titans, each sporting their own unique skill ability and character movement style. Players line up on the map edge waiting for the game to begin, once all players are ready and the first player to begin has been selected. Characters then proceed to the battlefield, racing across ‘infinite’ circuits on maps from the Neverworld.

Each circuit consists of either, three laps on a single game board or three different maps strung together making a single track. When it comes down to my personal choice of game rules and map layout, I generally prefer playing on three separate maps as each map hosts its own unique sub-ruleset to make it a bit more interesting. Each rider and titan have their own themed map that favors their specific skill set ultimately giving them a home-field advantage. The first player to make it to the finish line takes victory, but be warned, other players have tricks and skills of their own to disrupt any plans you may be scheming.

How to play Titan Race

At the beginning of each turn the new beginning player for the round rolls dice equal to the number of riders on the game board, each player, in turn, selects a dice representing their movement for the round. Each dice face represents various move styles, should any selected die of movement share the same color as their rider (Red, Blue, Green, etc) that rider will also regenerate a heart of life. Movement dice generally move in some sort of diagonal and/or forward patterns.

Each rider and titan have their own unique life point total. Once a characters life points have been reduced to zero that character is knocked out and their player must sacrifice their next turn to revive. Once Knocked out, the game piece is tipped over at the location of their death. K.O’d players become an obstacle for the other players to navigate or push around as needed to clear their path, subsequently, this can occasionally result in a second round of unconsciousness depending on the number of players that come after you on your revival round.

I’ve intentionally left out the various ways to damage an opponent and have avoided listing any of the special sub-set rules because I believe Titan Race is worth picking up to play! Gather a few friends or family members together and crack this game open. I thoroughly enjoy Titan Race and regularly play it on the weekends with my wife and daughter! Evelyn (daughter) started learning Titan race at the age of 5 and has regularly won matches since.

All in all, I encourage you to take a look at what this niche, under-publicized game can offer you and your fellow players. For us, it was hours of entertainment!