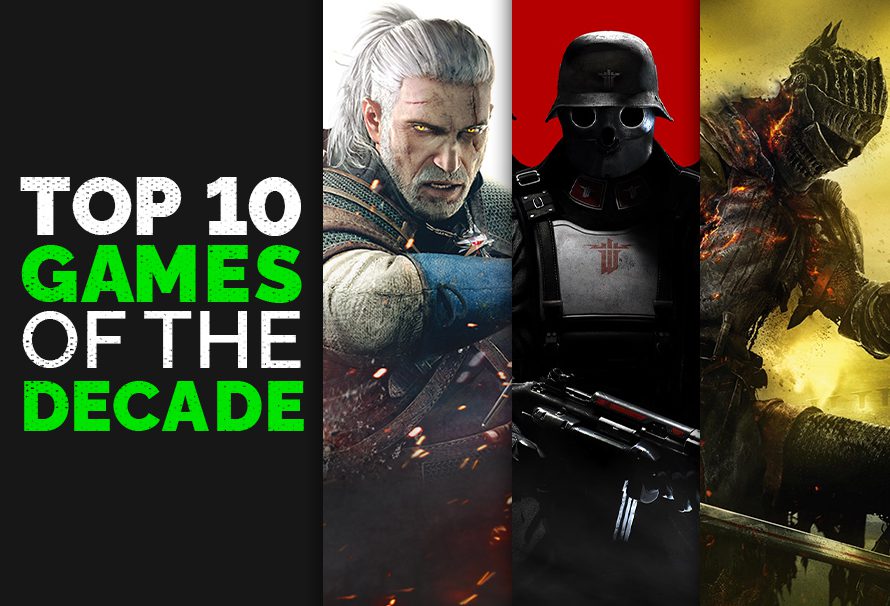 All things considered, it’s been a hell of a decade for video games. Genres have been born and culled, multiple milestones have been passed and a series of legendary titles have graced our screens blessing us with hours of pure enjoyment. How lucky we are to have such a bustling hobby! Read on for our ten picks of the best games from each year of this fine decade. If you don’t agree, don’t fret… it’s just uh, our opinion, man…

Bethesda’s greatest Fallout game… made by another developer. Obsidian’s spin on the Fallout IP is still regarded as one of the greatest games of all time. The freedom it allows as you careen across the Nevada desert, siding with terrible people and exploding the heads of their enemies with V.A.T.S. An electrifying story with some absurdly good DLC, the atmosphere is still not lost in 2019. At launch, New Vegas  shifted 5 million copies and has since gone on to sell many more.

Easily the most influential game of the decade, Dark Souls’ legacy can be seen in its five sequels from From Software and now even a licensed Star Wars game in Fallen Order. Yet it’s Miyazaki’s world and creature design that the pretenders just can’t imitate. Getting lost in Lordran is still an irreplaceable feeling, the wistful melancholy pervading each combat arena. As of 2015, Dark Souls had sold nearly 3 million units worldwide with the entire From franchise approaching the 10 million mark.

A revolutionary stealth game from veterans of Thief and Deus Ex, Dishonored introduced players to the rat-infested world of Dunwall, its steampunk rulers and aristocracy protected by one Corvo Attano, who gets wrapped up in a rapturous political conspiracy. A masterwork in narrative design, each level is a stunning diorama ripe for tinkering.

A satiric open world full of unpredictability, Grand Theft Auto V changed gaming for the better by setting the bar for open world games, a bar that was only raised in the years to come. Yet there’s still nothing quite as intricate and modern as GTA V’s San Andreas, where you can drop hours simply fooling around with the civilians. The physics, vehicle control and detail are undeniable, as is the exciting online mode that has kept improving as the decade has crawled to its end. Thanks to Rockstar’s infamous Shark Cards, the game went on to become the most profitable entertainment product ever.

Machinegames reinvention of the classic Nazi-smasher series Wolfenstein was an absolute visceral delight when it launched back in 2014. With a moving, genuine story behind it and a bold visual style, playing as BJ and crunching through foes has never felt as satisfying. The original still stands out as the best in the series, a mark the sequels have yet to live up to.

At the midpoint of the decade our good friend Geralt hit the mainstream and gaming has yet to recover. His luscious white locks and Roach have been engraved in the gamer consciousness ever since. An impossibly rich open world with the best quest design seen in a game of its scope, Wild Hunt will have a long legacy as a game-changer, and the natural crescendo of CDProjektRed’s ambitions with the franchise. In June of this year, the game surpassed 20 million units sold.

Naughty Dog’s finest achievement was in making Uncharted’s story really sing, where previous games have languished in absurd stakes and ridiculous antagonists. The studio clearly learned a lot from The Last of Us and used that human element to tell the final Uncharted story, which is easily the most emotionally resonant (and fun) tale in the series. With fantastic open-world sections and excellent rope-swinging platforming, Uncharted 4 set a very high bar for AAA story games.

An extremely brazen reinvention of one of the most popular franchises in gaming, Nintendo nailed their console launch with one of the greatest games ever made. Breath of the Wild is the perfect complement to a portable console, a moreish experience where simply climbing and exploration is distilled into a fascinating joy. A world alive with weather effects filled with broken people reacting to a mysterious dystopia, it evolved the storytelling of a genre many skeptics thought was too easy to pin down. It quickly became the bestselling Zelda game of all time, shifting over 10 million units.

As good as GTA V was, its story wasn’t as engaging as many expected it to be, though the open world made up for it. Rockstar was firing on both barrels with Red Dead Redemption 2 however, delivering a stunning Wild West with some extra special secret sauce: you can talk to every NPC in the world. With a story bursting with a surprising amount of emotion, a band of dynamic characters, Red Dead 2 balanced chaotic gunplay with the quiet serenity of horseback exploration, and it will be long remembered for the way it will influence future open-worlds. As of February this year, it has sold over 23 million copies.

Metal Gear Solid’s Hideo Kojima came back fighting from his mid-decade bust-up with Konami, delivering an undeniably inventive game with plenty to say about the state of our disconnected society, a worthy sequel to his prophetic visions of the future in Metal Gear Solid 2. Deliver cargo, enjoy a mind-bending story and feel some emotions for a change, with a legendary soundtrack and a genius social system to back up proceedings. What a way to sound out a fantastic decade for games with something so inspiring and positive.

Do you agree with our List? Comment below or head over to the Green Man Gaming Community site and tell us what your favourite games of the last decade are.