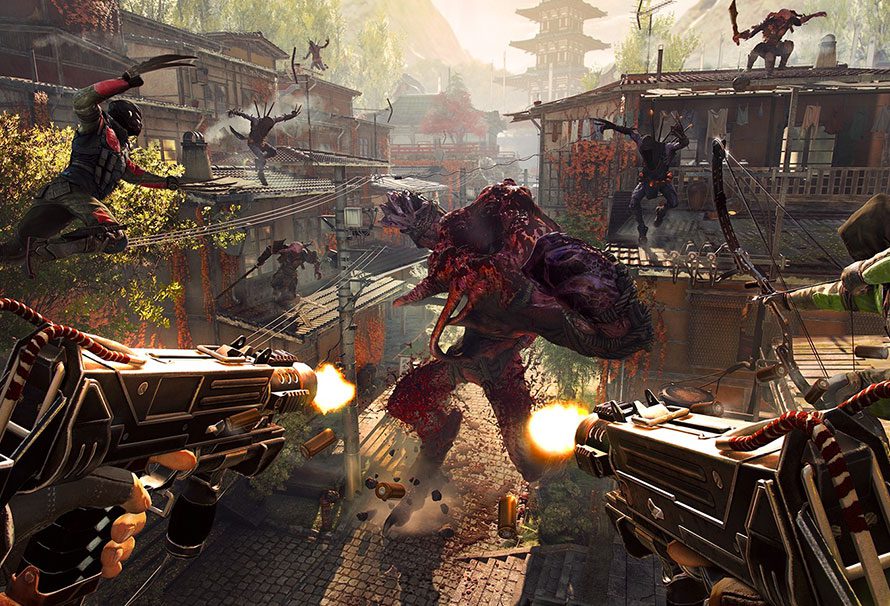 Shadow Warrior 2 is almost here! We cannot wait to get our hands on this kick-ass 90s style FPS. With it’s awesome Stan Bush theme song and it’s gory and brutal gameplay, this game could quickly replace Doom as our favourite FPS of the year.  If you love Serious Sam and Hard Reset, Shadow Warrior 2 is definitely for you. To get hyped up for it’s release, we’re looking at some of our favourite enemies from the franchise!

In Shadow Warrior 1 & 2 we follow the modern ninja Lo Wang as he battles his way through hordes of disgustingly demonic enemies! In a game like Shadow Warrior 2, the enemies are of equal, if not more value than the protagonists. Because you can’t properly enjoy a  good shoot ’em up if you don’t enjoy smashing the enemies to bits! So here’s a little look at some of our favourites:

Mother
“What is that, a pregnant Yak?” – Lo Wang

Visually, this demon stands very tall, with two large horns on it’s head. It also has a teeny, tiny version of itself in it’s belly (hence the name). When looking at this demon’s gangly body and lolling tongue, we’re reminded of the spitter from Left 4 Dead 2, and we love the spitter! So we think this monster’s design is pretty neat. The Mother uses suicide attacks to damage Lo Wang, by running up to him and exploding. So the best approach to attacking this enemy, is to attack it from a distance with a long range weapon – like a cross bow. We hope that this enemy makes a return in Shadow Warrior 2, as it’s glowing pustules would look fantastic with updated graphics!

The Birdman are annoyingly focused on throwing projectiles at Lo Wang. These creatures can be found skulking around on the ground or flying in the sky! The flying Birdman will stay a fair distance away from Lo Wang, whilst chucking fireballs his way, whereas the ground based Birdman will throw any old projectile. But never fear, these cretins can be easily disposed of with pretty much any weapon, so Lo Wang should make short work of them. We particularly love the design of this half human-half vulture hybrid, and we think that the fabric wings are especially clever.

Arguably, the strongest enemies in Shadow Warrior, these behemoths have a HUGE amount of health and can withstand massive amounts of damage. The Berserker’s main attack is to charge Lo Wang, and if he doesn’t hit a wall he can keep charging! If Lo Wang gets too close to him, he’ll use an AOE attack. Gahhh! As if this demon wasn’t difficult enough to kill, Berserkers usually spawn in pairs. Visually, the Berserker looks like a more ‘traditional’ demon, with his massive horns and red eyes. We love the design, we hate fighting him!

Flying Wild Hog (the devs) have played their cards pretty close to their chest during development, so we don’t know too much about a lot of the new enemy types, apart from what we’ve seen of the concept art and gameplay trailers! We do love that there are no spoiled surprises, but it means we can only look at a couple of the upcoming demons.

Toro
“Out here, you live by the gun, but you can still die by the sword.” – Lo Wang

This impressive demon sports Samurai armour and uses a double bladed stave as a weapon. They are frequently encountered, but are actually quite difficult to take down! They can land multiple blows in a single attack by swinging their staves in circular motions, and even throw them at Lo Wang as a projectile! Due to the sheer size of their weapons, they can easily block your attacks.

The overall aesthetic of Shadow Warrior 2 is heavily demonic with a Japanese twist. If the Toro is a Samurai, the Hammerhead is a bit more of a Shogun – smaller and more aggressive. This enemy will be throwing a l0t of lunging attacks Lo Wang’s way. Other than that, we know nothing about him! But we are in love with his disfigured, hammerhead shark head! We can not wait to slash this demon up with a katana!

Talon
“Wow, look at you! Momma’s little demon all grown up.“ – Lo Wang

If you don’t kill a Claw fast enough, it may turn into this fearsome creature. With no eyes, and only a mouth with a row of sharp teeth, this demon acts as a mini boss in Shadow Warrior 2. It’s heavily mutated and it varies in size from large to very large! You have to watch out for this fella, as he will throw his weight around, dealing heavy damage through ground pounds and melee attacks. This demon is so grotesque, which makes killing him all the more fun!

If this has sparked your curiosity, you can grab Shadow Warrior 2 right now on Green Man Gaming!