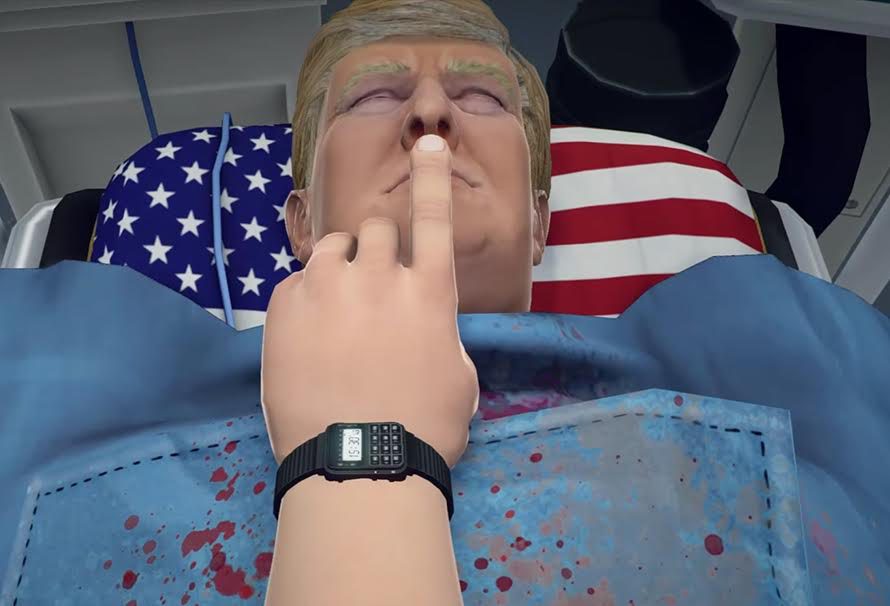 The US Presidential Election is fast approaching and the competition between Donald Trump and Hillary Clinton is hotting up, everybody is talking about it!

Surgeon Simulator released an update back in June of this year entitled ‘Inside Donald Trump’. In the update players can perform surgery on the presidential candidate. The main objective of this surgical procedure is to either give Mr Trump and heat of Gold or a heart of stone. The update was also given lots of Trump related paraphernalia to play and experiment with, such as a model of the Trump tower, some Trump branded vodka and even a cut of prime Trump steak.

We got the chance to sit down with the developers, Bossa Studios, to ask a couple of questions about the Trump update and their thoughts on the presidential candidate as a whole.

How did you come up with the idea of adding Trump to Surgeon Simulator?

Surgeon Simulator is about irreverent, morbid fun – and for those players who looked deeper – there’s also quite a dark satirical commentary on life in the UK. However we’ve always wanted to incorporate topical news stories into Surgeon Simulator and to go ‘yuge’ – not just local, with our content.

With Trump, we felt we had the perfect candidate…like it or not, he is one of the most talked about personalities on the planet right now!

Has anything that Trump has done recently made you think “We should have added that in!*?

Trump is the centre of so much controversy that he actually gave us too much material to work with. Unfortunately a huge chunk of it (by its very nature) was just too offensive to add in – but trust me, we did talk about it!

We did add a ‘small hand’s Easter egg in there among others – but many didn’t make it. We discussed changing up the blood mechanic a bit – so that Trump literally had money flowing through his veins. There was also a ‘the wall’ mode (try doing Surgery behind that!) and references to ‘Gina’ and Mexican food. But for reasons I’m sure you can imagine – none of that made it in!

Has the Trump DLC been well received? What are the current surgical stats?

We were blown away – it was the best received update we’ve done, beating our previous GoatBread record (goatbread.com). Keep in mind that some places didn’t want to promote the new content given the subject matter – so an epic result! We wanted to make this free for anyone who has supported us and has the Anniverary Edition – and many people bought it just to operate on Trump!

Stats for the heart replacement surgeries are: 41% Heart of Gold, 59% Heart of Stone for Mr. Trump. In total $196 Billion was spent on Trump Surgeries.

You can see the latest stats at surgeonsim.com/trump

This will be the LAST CHANCE to vote! The Election Countdown has begun.

Have you considered adding any other world leaders/politicians, Past or present into surgeon simulator?

We wanted to put Hillary Clinton into the update too – but to keep topical we had to move fast. Also – at that time we didn’t know Trump would get as far as he did.

Funnily enough we didn’t talk about many politicians – but celebrities instead. Kim Kardashian, Kayne West, Lindsay Lohan – people who are controversial and ‘love / hate’, just like Surgeon Simulator.

In fact – it’d be great to hear from people if they think that’s a good idea, please Tweet @surgeonsim

If you were to perform surgery on Trump would you give him the stone heart or the gold heart?

I was afraid you were going to ask that! I’ve of course tried both (and unlocked the gift on the surgery table) – but the first time I did it, I picked Stone. It’s weird as the internet is resurfacing all these old interviews where Trump is quite the gentleman, and even friendly towards Hillary! But I’ve got to judge him on current behaviour. Plus a good friend of mine is Mexican so…

Has trump commented on the game? If he hasn’t then what do you think he would say?

No! We were secretly hoping that he would come down from Trump Tower and rain us with quotable quotes and maybe a lawsuit! Alas – that didn’t happen. We were ready though and had taken advice.

If you want to get your hands on a copy of Surgeon Simulator Anniversary Edition (complete with ‘Inside Donald Trump’ Update) then keep an eye out on a Twitter tomorrow, as we will be giving away 5 keys for PC.

Games You Need To Get Now The Oculus Rift is Cheap

Top 10 Spooky Games To Grab In Our Halloween Sale