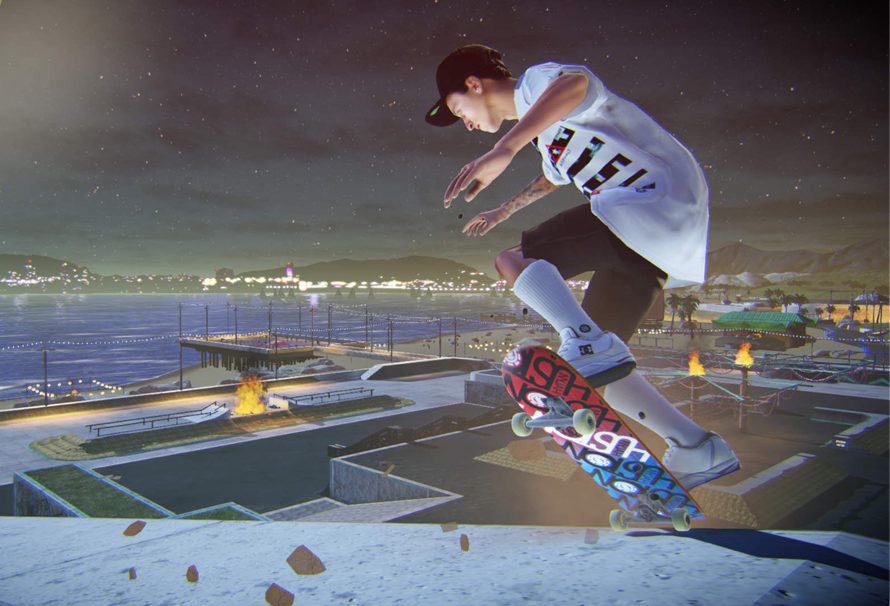 “Skating is not a crime!”

Anyone old enough to remember that rallying cry probably still thinks of edgy counterculture and Tony Hawk when they think about skateboarding, and there’s a good chance, too, that they played Tony Hawk’s Pro Skating in its heyday.

While skating switch sounds more like a Nintendo peripheral than anything else in 2020, the series still contains fond memories for an entire generation of gamers.

So let’s grind the rails one more time and look at the history of the Tony Hawk’s franchise.

Heaven is a Half Pipe

Skateboarding feels like a comfortable part of youth culture now, but 1998, it was exploding with new popularity. This caught the attention of publisher Activision, who approached developer Neversoft to translate the hobby into video game form.

It was up to Neversoft to figure out how to turn the sport into gameplay, and their approach was radical enough to work. Instead of going the obvious route and aping an average racing game, Neversoft scrapped their initial ideas and set out to make something that felt true to the sport.

It might surprise you to learn Tony Hawk was a late addition to Neversoft’s game, but he proved to be the right person for the job, helping Pro Skater to find its groove just as he became the face of skateboarding in the late 90s and early 2000s.

Pro Skater proved to be a completely unique game. Players controlled various skaters in full 3D environments, with the aim being to wrack up points by performing sick tricks. Missions and a full career mode provided the game with structure, and a control scheme uniquely designed for skateboarding gave the whole experience the taste of reality.

The game’s soundtrack also helped it to land with gamers of the time, featuring bands like the Dead Kennedys and Primus. The sequels added other icons like Papa Roach, Rage Against The Machine, and the Red Hot Chilli Peppers, populating the playlist with a Who’s Who of Kerrang! in the early 2000s.

The game was a roaring success, and Neversoft expanded almost overnight, riding its popularity. The possibility of turning Pro Skater into a franchise of yearly releases a la mega-sports like football and basketball became an irresistible possibility.

The original Pro Skater received multiple successful follow-ups, including a breezy transition to the second generation of 3D consoles. These games became some of the most acclaimed on their consoles, so most people who owned a Playstation 2 or Xbox have fond memories of the franchise from this era.

After the release of Pro Skater 4 in 2002, Neversoft decided it was time for a change. Wary of stagnating the franchise, they took the next game in a different direction under a revised brand: Tony Hawk went Underground.

Underground made several changes to the formula, shifting the series away from its sandbox-style, mission-based gameplay and toward something more structured. For the first time, the series featured a main plot, and broke down the barriers between skater and player. Instead of choosing from a licensed, real-world skater, the player built their own character and charted a path from nobody to professional skater in a defined story.

In keeping with the retitling, the plot included underground, criminal elements, with a plot reminiscent of the likes of Ubisoft’s recent The Crew series. To emphasise the adventurous elements of the plot, Underground also introduced non-skating gameplay, opening up new ways to traverse the environment.

Rounding out the player-driven experience was a powerful new park editor, which turned the game into a toolset for enthusiastic players to come up with their own levels.

Underground met with critical acclaim, and a sequel followed in 2004. Though it retained much of Underground’s general architecture, Underground 2 found a new direction with its plot. Players joined Tony Hawk and Bam Margera, then the face of popular comedy show Jackass, on their “World Destruction Tour”.

Shedding the Underground brand, the series made another gameplay and thematic shift with American Wasteland. This game promised a connected, open world, and the story re-focused on a more low-key, personal story that harkened back to Underground 2. American Underground also introduced BMX gameplay for the first time.

American Wasteland received a lukewarm reception. Several reviewers noted that the “open world” was more of a hub connecting individual levels with crudely-masked loading screens between them, which killed some of the hype around this exciting new direction for the series.

American Wasteland also suffered due to a general shift in the zeitgeist. Skateboarding had now transitioned from its early 2000s popularity surge into a quietly-mainstream hobby, as more cities catered to skateboarders with new skate-friendly parks. This moved skateboarding from a street-based, counter-culture activity into an accepted part of youth culture, shaving off some of its flavour-of-the-decade energy to transition it into a quiet part of urban life.

Neversoft was able to regain some momentum with the release of 2006’s Project 8, which finally delivered on the previous game’s promise of an open world. It introduced a few new features while removing others, which ultimately led to a positive, though not overwhelming, reception. Proving Ground, released the next year, met with a cooler reception, and this would prove to be the last game developed by series originators Neversoft. Activision moved development of the franchise over to studio Robomodo as Neversoft shut its doors.

In 2009, gamers got their first glimpse of Robomodo’s version of the series. In the wake of Guitar Hero’s rampant success, Activision pushed the idea of peripheral-based games onto other projects, including Tony Hawk’s. Ride and its sequel Shred moved the gameplay of the series to an on-rails experience and away from the plot and sandbox archetypes of other games in the series. This dramatic gameplay shift, along with technical issues, and the required but expensive peripherals meant Ride and Shred both wiped out, receiving a harsh reception.

2015’s Pro Skater 5 was supposed to mark a return to the series’ heyday, invoking the original series title to imply a connection with its former success. This was Activision’s first shot at a Neversoft-styled Tony Hawk game since taking direct control of the franchise.

Sadly, it was a total faceplant. Rushed to meet the terms of the licensing deal held with Tony Hawk, the game released with almost no fanfare and in an unfinished state. The game’s weaknesses were obvious even prior to release, best typified by Activision’s 11th-hour shift to an uncanny cell-shaded style after preview builds of the game were publicly criticised for their dated graphics.

Critics weren’t kind to Pro Skater 5, noting the huge gameplay departures from previous games, dated graphics, and lack of polish. It took a day-one patch to even render the game playable. Pro Skater 5 was so legendarily bad, in fact, that it sits in the bottom 10 titles of both the Playstation 4 and Xbox One by critical and audience reception.

There hasn’t been much news from the skatepark since 2015, though Hawk himself continues to express an interest in the future of the franchise. While Hawk eventually partnered with Maple Media to produce Tony Hawk’s Skate Jam, it wasn’t exactly the series reboot that long-term fans hoped for.

Even beyond the Tony Hawk name, the skating genre in video games lies fallow, with franchises like Skate or skate-adjacent Jet Set Radio going quiet. Even in the broader extreme sports genre doesn’t have many modern titles to write home about. The few exceptions include Session, a game that is to skateboarding what Microsoft Flight Simulator is to flying. Games likes Ubisoft’s Steep have which found an audience with fans looking for more extreme sports action, filling the void left by Tony Hawk’s and SSX. And then there’s whatever SkateBIRD is, which we’ll find out when it releases in 2020.

It’s a shame that there isn’t more to say in the wake of the 20th anniversary of Tony Hawk’s Pro Skater, but Hawk’s active (and hilarious) Twitter presence does give us some hope that the internet will work its magic someday. Gaming has certainly had stranger comebacks, and if anyone knows how to come back from a wipeout, it’s a skateboarder.

So which was your favourite Tony Hawk game? Comment below and join the Green Man Gaming Community to join the conversation with all our gamers.