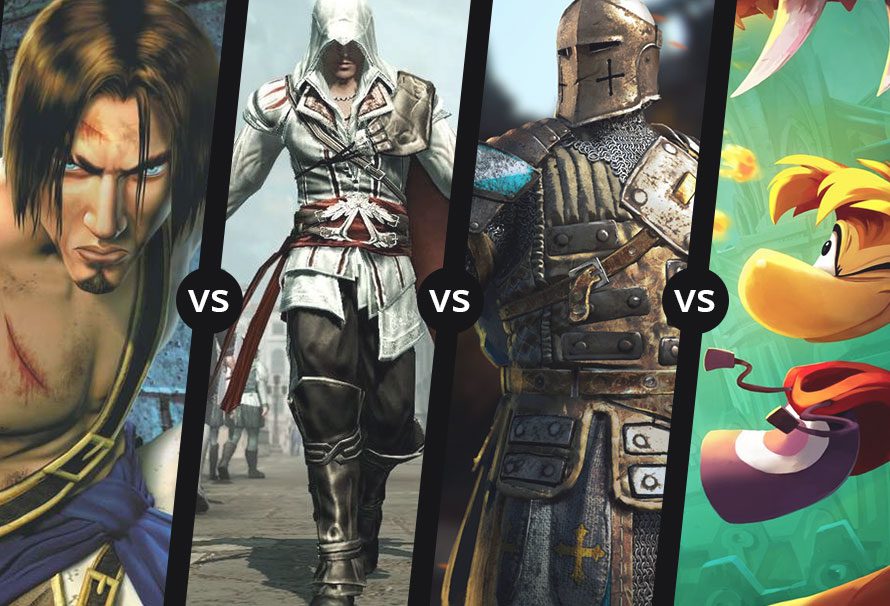 It’s been a busy couple of months for Ubisoft. First For Honor meleed its way onto the scene, and now Ghost Recon: Wildlands is here to help you take down the cartels.

So we had a thought: Why not ask you, the community, what your favourite Ubisoft games are, and then make them fight on Twitter! That way we’ll know with 100% (0%) scientific accuracy which Ubisoft game is the best. With only a little more ado, here’s the contenders as voted by you!

Note: The author of this piece loves Assassin’s Creed IV: Black Flag so, so much. However as a professional I will not let any bias come through in my writing. Even if I am disappointed that it didn’t even make it to the Twitter poll.

In For Honor you can be a brutal knight, a vicious viking, or a warlike samurai. Can you be a pirate though? The answer is no, no you cannot. Though some of this game does feature water that you can be knocked into, you are incapable of piloting a ship around the Caribbean seas. Instead it focuses on close combat, with weapons scything your opponent’s blood into the air.

Contender 2: Prince of Persia: The Sands of Time

The eponymous Prince of Persia is a leaping, stabbing hero who starts the game only really caring about finding more riches, but evolving into a more complex character who has more deep worries throughout the course of the game. Much like Edward Kenway from Black Flag. Set in the midst of a desert of swirling sand, The Sands of Time revitalised the Prince of Persia formula and changed the way we think about time itself.

The side scrolling platformer has never been as utterly joyful as in Rayman Legends. Is it as gleeful as a pirate who’s just made it back to their lair with a full chest of loot and a belly full of grog? Maybe! Every single thing about Rayman Legends just shouts joy at you, from the design to the music to even the sound effects. I dare you to play Rayman Legends and not be grinning during every moment, go on, I’m waiting.

See? You were smiling. Knew it.

Held by most as the best protagonist of the Assassin’s Creed series, Ezio Auditore da Firenze is the star of Assassin’s Creed II, Brotherhood, and Revelations. Most people are wrong though, the best protagonist is clearly Edward Kenway. Anyway, this game covers Ezio’s rise from a spoiled noble running the streets of Florence to a master assassin, skilled in all the essential assassin skills such as stabbing, jumping off tall buildings, and more stabbing. Ezio does get to steer boats, making him a strong contender for Edward Kenway’s crown, but none of the little gondolas he pootles around in can match the majesty of Kenway’s Jackdaw. That said, Assassin’s Creed II is a masterpiece of a game, firmly cementing the Assassin’s Creed series as one of the great gaming series. 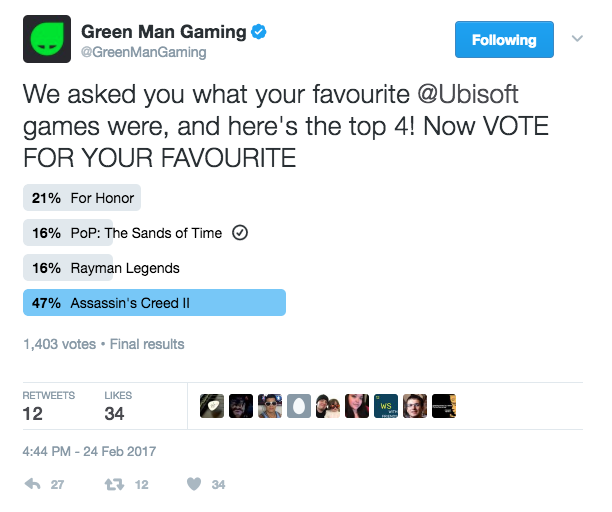 There you have it! Assassin’s Creed II absolutely DEMOLISHED the opposition. It seems our community loves stabbing people in Renaissance Italy, which isn’t at all worrying!

BIG STABBY CONGRATULATIONS TO: Assassin’s Creed II: The GREATEST Ubisoft game of all time! (as decided by our Twitter followers who should’ve voted for Black Flag).