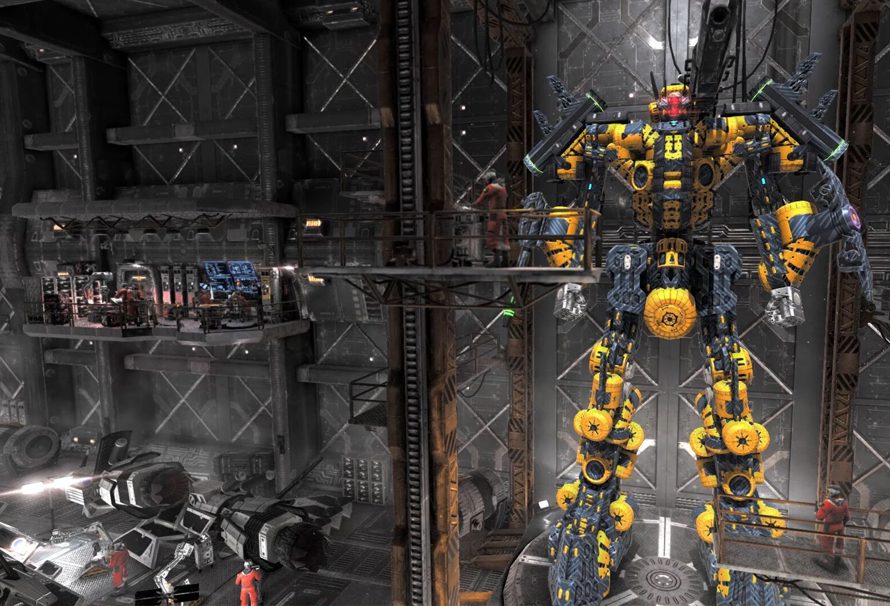 War Tech Fighters, the newest game from Green Man Gaming publishing is hitting Early Access tomorrow. We got some hands on time with the game last week and it is safe to say that the game is nuts! If you are into your over the top mech games that give Gundam a run for its money then this is the game for you, here’s why.

WTF’s answer to mechs, War Techs are colossal machines that have been developed in order to hit hard against the Zatros Empire. Each War Tech comes with three attacks, machine guns for light attacks, heavy artillery for heavy attacks and sword to hack your enemies to pieces. You also have a shield to deflect enemy attacks, which comes in very handy as you will find yourself swarmed by enemy space craft.

War Techs are fully customisable as well, meaning you can create your very own mech which fits your play style. Each War Tech falls into three classes, one built for speed, one built for power and the other which is balanced between the two. You are then able to build upon these basic foundation in order to create your ultimate fighter. You are able to change every aspect of your War Tech including weapons, armour and propulsion systems. Players will also have to research new technologies in order to build new weapons and armour to kit your War Tech out with. So If you want that laser sword you are gonna have to gain resources and research.

It is also good to note that War Tech comes with some pretty kick ass execution moves, sigh as drop kicking spaceships and slicing battle cruisers in half.

War Techs are primarily designed to fight in space, and with that players are going to experience some high octane space battles involving colossal robots and battalions of space ships. The games opening missions have you conducting these battles whilst in the orbit of a black hole, which in itself looks pretty amazing. As mentioned before you will be able to take out these spaceships in various ways with your War Tech. You will even come face to face with enemy war techs in epic one on one War Tech battles.

Even though WTF is primarily built on mech robots fighting in space. It also has gameplay sections where players will have to hack machinery, solve puzzles and infiltrate enemy territories undetected. We got the chance to hack some enemy vehicles and the experience reminded us of the password cracking in the Batman Arkham games. Players will have to use both thumb sticks on the controller and the pads vibration in order to find the sweet spot. It’s a great little mini game that on the surface sounds straight forward but can get pretty tricky later in the game.

The developers have promised that the game will feature more varied gameplay and is hoping that by going into Early Access they can benefit from the communities suggestions as well.

War Tech Fighters goes into Early Access on the 16th of August. You can pre purchase your copy now from Green Man Gaming.