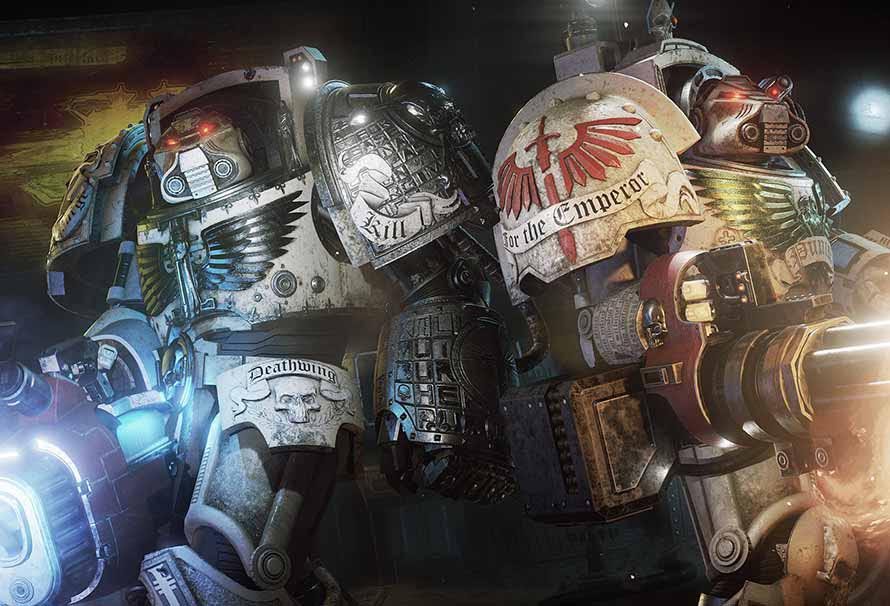 The iconic Warhammer 40,000 universe is getting a brand new first person shooter next month! Space Hulk: Deathwing promises to bring some epic gameplay within the Warhammer 40k franchise we love. So here is what we currently know about this epic space shooter.

You play as a librarian, a class of Spacemarine who posses psychic abilities. You are accompanied by a squad of the Deathwing, the first company of the Dark Angles Spacemarine chapter. Your mission is to infiltrate and explore the Space Hulk to follow a distress call. A Dark Angel reconnaissance squad is seeking help deep within the Space Hulk and it is up to you and your squad to find them.

Space Hulks are huge leviathans which are comprised of Spaceships, asteroids and various bits of other space debris. As you explore this Space Hulk you will have to seek out various pieces of technology and relics in order to understand the architecture of this monstrosity.

Each mission will have you exploring a different ship within the Space Hulk, with environments built from actual spaceships from Warhammer 40k’s extensive lore. Each ship will have different aesthetics and themes based on what race owned them.

Through out the game you will come across swarms of Genestealers, a species of Tyranid who are used as the ‘Shock Troopers’, of the Tyranid army. A single Genestealer is no match for the Deathwing. However, as swarms they can be deadly as they use pack tactics such ambushes and encirclements which can easily overwhelm any unsuspecting Spacemarine squad. To keep the Genestealer numbers at bay you will need to make sure to lock doors behind you to reduce the risk of being swarmed.

Space Hulk: Deathwing features a variety of famous weapons from the 40k universe which is bound to have any fan of the franchise smiling. Some of the weapons include the classic assault cannon, Heavy Flamer, Storm Bolter and Lightening Claw. There will be some new creations too specifically designed for the game, but the developers are keeping tight lipped on any new additions to your arsenal at this time.

Each member of your squad wears Terminator Armour. A tactically augmented suit of dreadnought armour designed and made by the Deathwing Terminators.

Damage in Space Hulk: Deathwing is localised, for example if you take too much damage to your right hand you will be unable to use the weapon you have equipped to that slot which means you will need to keep an close eye on your HUD to make sure you are not taking to much damage to a specific area.

We cannot wait for Space Hulk: Deathwing, the game lands on December 9th. You can pre-purchase the game from Green Man Gaming right now. Hopefully some more info will surface after the Beta this month.