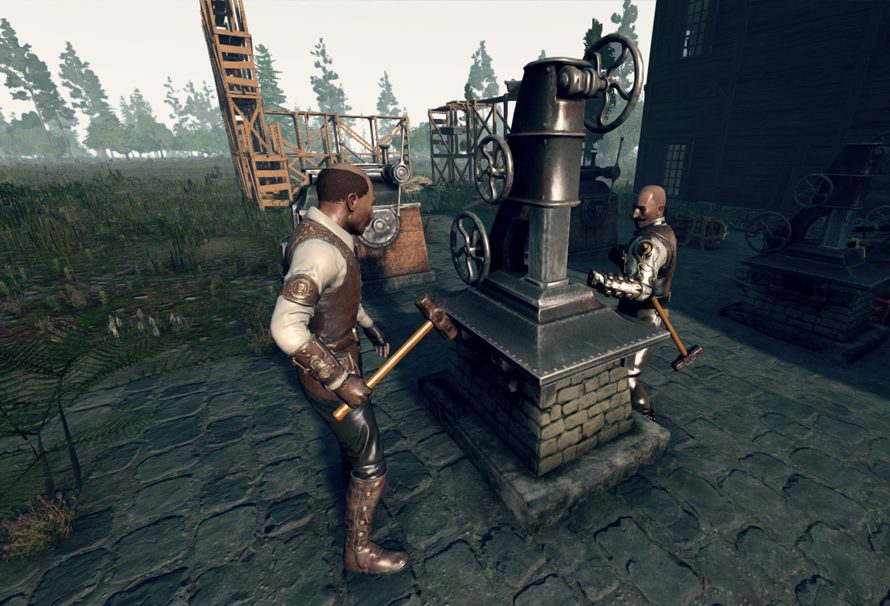 Here you’ll find all the advantages of sandbox games in the mysterious world of steam engines. Immerse yourself in the late 19th-century alternate reality. Try yourself as an explorer, craftsman, architect, industrialist and conqueror. Forge weapons and armor, build houses, factories and towers, fly airships and jetpacks and stand up to the enemy.

The game world teems with opportunities for crafting tools, equipment and machinery.
The game features more than forty types of weapons and armor and over thirty types of buildings and fortifications. Build your own fleet of customized airships and fight both on land and in the air.

What makes the game special is realistic skills development. To master each trade you’ll have to make some efforts.

There are no easy ways, but there is cooperation. There are no clear boundaries – it all depends on your imagination. You find yourself in a world free from rules and restrictions, with no pre-defined roles and imposed goals. This is your world.

If you are not happy with the surrounding landscape, you can always modify the terrain – use terraforming to the fullest. Construct mines, tunnels, ditches, mounds – you name it!

Develop technology and machinery, secure your town and build warships, grab your steam hammer and show them who’s the boss!

When you start the game, you create your own character with a unique set of qualities. To feel what it’s like to live in the world of steampunk, you can choose both the character’s appearance and their crafting and combat skills. Choose who you want to be and level the skills you need: You can gather resources, create objects and interact with the world around you.

You ended up on one of the Acribian islands, surrounded by the mysterious world of Saol. Wandering around these lands may not be safe – apart from you, there are also wild animals as well as other players who are ready to defend their territory. In order to survive, you will have to adapt quickly. Start collecting everything you can get your hands on, namely more than 250 different ingredients for crafting tools and structures.

All the most valuable things are well hidden on the island – in the ground, in the forest, in the mountains. The earth is rich in minerals, but you need to learn how to find and extract them. Your search for a rare plant called celebrium – the real treasure on these islands – may be particularly intriguing. Here you’ll find forty five species of plants and animals, thirty types of useful resources – and that’s not all these mysterious islands have to offer.

What you’ll do in this world is entirely up to you – which skills to level, what buildings to construct and which play style to choose. But any progress comes at a price. You can develop faster if you team up with other players. If you create a guild, you will be able to stand up to the enemy, protect your land and even collect trophies. A strong team, well-developed industry and advanced technology are key to your success on the server.

A real living board:

• A full 3D city at the center of the board lives and evolves as you play. You own a miniature world where each neighborhood has its own unique identity and characteristics. Its friendly inhabitants will interact with your progression throughout the game and celebrate your achievements, bringing a new dimension to your experience. Feel that you own something special and admire your empire grow right in front of your eyes!

Play the way you want

• You can change the rules and adapt them to your playing style. Play the famous Speed Die mode to spice up your game or select from a catalogue of 6 house rules chosen by Monopoly community members from around the world!

All-Star Fruit Racing is the kart racing game you’ve been waiting for! Graphically stunning and incredible fun with a strategic twist that will keep you playing.

Race on many breath-taking and distinct tracks spread over 5 spectacular islands: you’ll discover fantastic worlds… and remember: speed is nothing without strategy!

THE JUICER:
Together with the incredible artwork the hook of All-Star Fruit Racing is the strategic element when using The Juicer.

“The Juicer” is a liquidiser positioned on the back of each kart that contains four separate tanks to be filled by collecting fruit on the track. Once you have filled a tank you can unleash a power up, if you have two or more tanks full then you can choose to use a combo power up, the more tanks you fill the stronger the combo move, wait until all four tanks are full and you can throw a “Mega-Juice” power up. Each pilot has its own unique “Mega-Juice” power up which if used right can turn a race on its head!

Requires Project Highrise (base game) to use this DLC

Welcome to Tokyo, a gleaming beacon of modernity and the pulsing heart of the Land of the Rising Sun. Finding a place to call home is a constant challenge in the most populous city on Earth. In the Tokyo Towers content pack, you’ll build residential towers full of apartments that cater to those seeking an urban oasis of calm amid the carefully choreographed chaos of Japan’s capital. Your towers will sprout balconies and terraces to provide a serene views of the city’s skyline far above the traffic filled streets.

With 10 new apartments, you’ll have many new choices as you seek to master the complicated, crowded (and expensive) world of Tokyo’s vibrant residential market. Ranging from smartly designed micro apartments to palatial penthouses, you’ll be able to design a quintessentially Tokyo residential block complete with matching exteriors and cityscapes inspired by Japan’s unique urban landscape.

Tokyo has always been a forward-looking metropolis on the cutting edge of art and design. From fountains and gardens to prints and statues, the content pack also features an array of new artwork to improve your building’s prestige and complete your truly Tokyo tower.

The classics of the genre!

Finally set your foot on the land to plunder it!

Assault a fort, defend a village, wipe out the undead and explore an ancient city – and more!

Get yourself a mighty galleon for either trade or piracy!

Land quests will provide with gold and abilities!