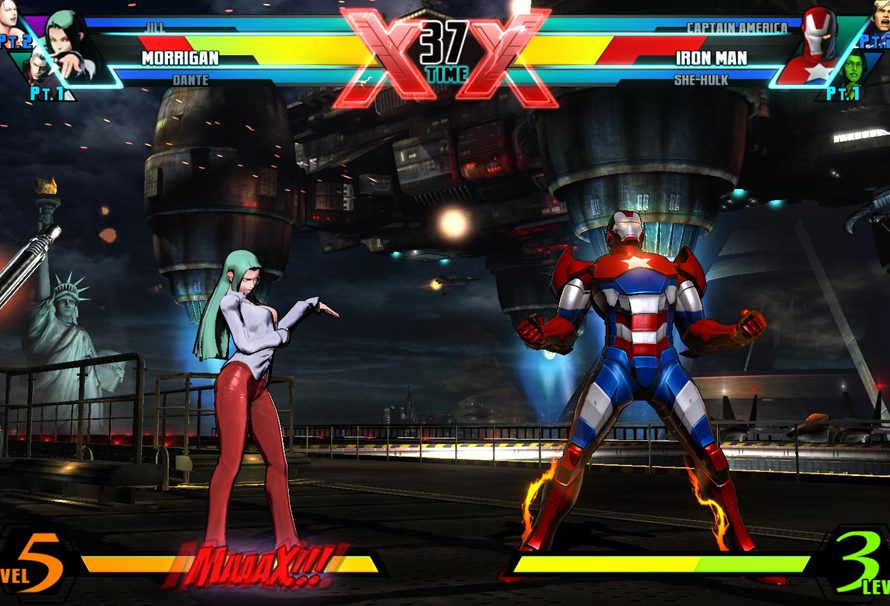 Looking for a food a hungry spider Riaaf climbed into an old abandoned house where he found many delicious flies. But, unfortunately, the flies are not the only ones who live in the house – here also live a scary ghosts, which in their turn do not mind to eat Riaaf itself.

Help Riaaf feed himself having passed a difficult way full of hazards and riddles.

Welcome to the Super Hardcore – casual game, where you play for a character of the most popular games – the big red cube. Your task is to collect the coins and to get to the exit avoiding the circular saws. Use your brain and logic to complete 21 incredibly difficult and interesting levels and collect as many achievements as you can!

Key Features:
• The growing complexity: 15 difficult, 5 extremely hard and 1 impossible levels only for you.
• Achievements. Everyone will know how cool you are and how many levels you passed.
• Full HD
• Music by HateBit

This re-release comes fully loaded: including all previous DLC, the Marvel vs. Capcom: Official Complete Works art book, and boasting full HD 1080p resolution at 60 frames per second. Select some of the most iconic Marvel and Capcom characters, and customize your team with “Heroes and Heralds” mode. Once you’ve honed your skills, hop online and go head-to-head against players from around the world to see who is the strongest in the universe.

In 911 OPERATOR, you take on the role of an emergency dispatcher, who has to rapidly deal with the incoming reports. Your task is not just to pick up the calls, but also to react appropriately to the situation – sometimes giving first aid instructions is enough, at other times a police, fire department or paramedics’ intervention is a necessity. Keep in mind, that the person on the other side of the line might turn out to be a dying daughter’s father, an unpredictable terrorist, or just a prankster. Can you handle all of this?

PLAY ON ANY CITY IN THE WORLD*

Check out thousands of cities from all around the world. The Free Play mode lets you choose a city to play on – the game will download its map, along with real streets, addresses and the emergency infrastructure. You can also try the Career mode, which contains 6 cities with unique events – survive an earthquake in San Francisco and save Washington, D.C. from bomb attacks.

MANAGE TEAMS A number of police, fire department and paramedic units are at your disposal. The forces may use a variety of vehicles (from common ambulances to police helicopters), essential equipment (e.g., bulletproof vests, first aid kits and technical tools) and consist of team members with different abilities.

PEOPLE’S LIVES ARE IN YOUR HANDS!

Over 50 recorded dialogues inspired by real calls: serious and dramatic, but sometimes also funny or annoying.

Oppurtinity to play on any city in the world!

More than 140 types of reports to encounter.
12 types of emergency vehicles (including helicopters, police cars and motorcycles).

Skill-based gameplay
What does skill-based mean? It means, that you need to learn the game’s mechanic over time (like in real life football). You need to work out your precision and reflexes to be a better player. Luck means little in Kopanito. The better player just wins and there aren’t footballer stats that can help you. You are the stats. Super-moves also are skill-based, the better you play, the more of them you gain during a match. Some super-moves can neutralize opponent’s super-moves.

It may not look serious, but we guarantee, that it is. Kopanito’s match engine is well-balanced. Use slide tackle to intercept passes or knock-down opponents (or even score a goal!). Pass the ball straight to your teammates (ground or air) or pass the ball between opponents. Score goals using chip shots or by swerving the ball using slow-motion shots. There are various set pieces, like corner kicks or throw-ins too, but no rules apart from that! Don’t forget, it is a fast-paced game – it might be funny and cartoonish, but it’s not that easy. Try it yourself!

Crush your opponent with a super-move
If you play well-enough, you will be awarded with a super-move. Then you can pull the ball using a super-strong magnet (because why not) or teleport into a different spot on the field, activate a big windmaker to blow things out of your goal-line, perform a super-shot that knockout opponents down on the path of the ball and freeze your opponents with the freeze super-move.

Try it with your friends
There is support for up to 5 controllers (4 gamepads + keyboard). Try the game with your buddies in a friendly match in various game modes – in any desired combination including 5 vs AI game or play in cooperation through a tournament. You can create own tournaments (league, knockout or league + knockout). You decide about stadium, ball and number of teams. You are the Boss here!

Online multi-player
You can play with other players around the world in quick match modes: Duel (1 vs 1), Doubles (2 vs 2), Chaos (3 vs 3), Complete (5 vs 5). The Create Party mode allows to customize an online match by choosing teams, stadium, decide of the match duration and invite friends to play against. Neat feature is that local friends can participate in online modes too.

AI won’t let you rest
Four different difficulty levels. The easiest one is a child’s play, while the last one… you’ll pull your hair out trying to beat the game. Also, there’s a practice mode if you just want to learn basic moves.

Many competitions and teams
Complete 17 tournaments and leagues in different parts of the world with regional national teams. A tournament consist of a group stage and knockout stage. In a league we apply a round-robin system. Depending on the type of event, there can be 12, 16, 24 or more teams competing. You can choose from 100+ national teams (even the most exotic ones) from all over the world and play on 7 stadiums.

Goal replays and GIF generator
Your awesome goals and incredible actions can be converted to an animated GIF and shared with your friends on a different the social media channels. See the collection of GIFs created by the community.

Bringing back memories
Clear inspirations for the game were classics such as Nintendo World Cup (graphics, crazy super-moves), Sensible Soccer and Kick Off (skill-based gameplay). We’ve spent countless hours on these games 20 years ago So why not to make something similar today? Having a choice is a good thing.