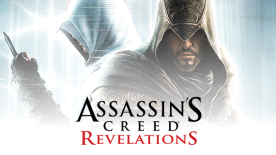 HIGH SPEED INTERNET ACCESS AND A VALID UPLAY ACCOUNT ARE REQUIRED TO ACTIVATE THE GAME AFTER INSTALLATION, ACCESS ONLINE FEATURES, PLAY ONLINE OR UNLOCK EXCLUSIVE CONTENT. SUCH CONTENT MAY ONLY BE UNLOCKED ONE SINGLE TIME WITH A UNIQUE KEY. YOU MUST BE AT LEAST 13 TO CREATE A UPLAY ACCOUNT WITHOUT PARENTAL CONSENT. UBISOFT MAY CANCEL ACCESS TO ONE OR MORE SPECIFIC ONLINE FEATURES UPON A 30-DAY PRIOR NOTICE PUBLISHED AT www.assassinscreed.com.