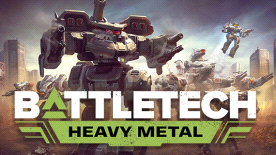 Copyright© 2018 Harebrained Holdings, Inc. All Rights Reserved.
MechWarrior and BATTLETECH® are registered trademarks of Microsoft Corporation in Europe, the U.S., and other countries, and are used under license.
Published by Paradox Interactive AB. All other trademarks, logos and copyrights are property of their respective owners.