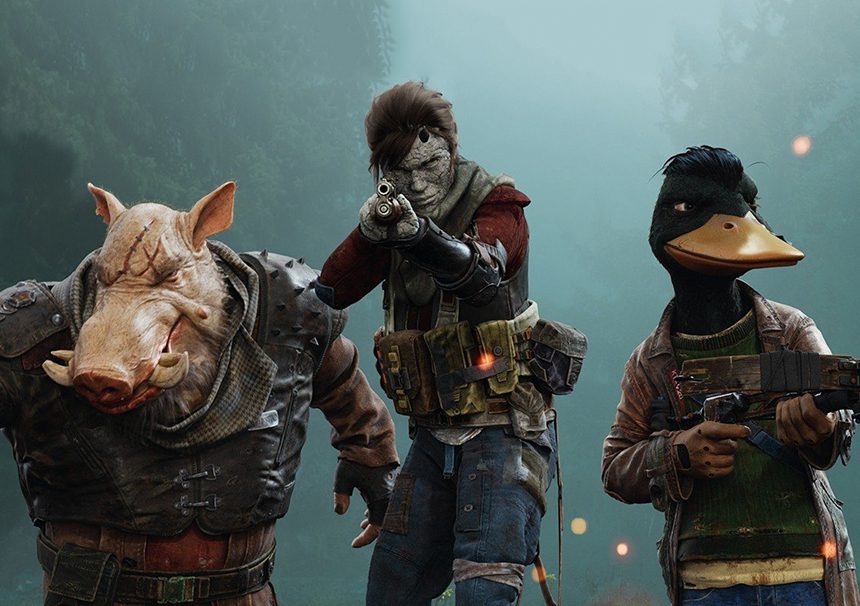 At first look, it seems like the characters from George Orwell’s Animal farm are living out their destiny in Mutant Year Zero: Road to Eden. Having presumably overthrown all the farmers out there, the strange creatures are roaming a post-apocalyptic world in a future where only one human population, the “Ark” remains. Despite my excited initial reactions to the game’s trailer, there are in fact no underlying political analogies to be drawn (that we know of…) and this time we are actually on the side of these weird and wonderful creatures.

So if it’s not really about revealing the destinies of Napoleon and the gang, let’s explore what this turn-based strategy RPG offers instead…

Not your average heroes…

Developed by The Bearded Ladies Consulting and published by Funcom, this strange world of exploration, story and stealth was released on PS4, Xbox and PC on 4th December. A team of heavily-armed mutant animals roam around the three large areas of the game and the old ruins that occupy them, searching for scrap to trade and keeping an eye out for anything that might want to fight. Bormin is the gruff stalwart, half-boar “tank” character with anger issues, who gamers can be forgiven for mistaking as one of the protagonists from Animal Farm (!). He is accompanied by Dux, the sharp-eyed half-man, half-mallard with an attitude problem. The character Selma is a morefully-human stalker in the game with a special ability to turn her skin to stone whilst hiding from enemies. Farrow also makes an appearance later in the game as the stealthy shotgun-holding, half-woman, half-fox. In control of this squad of mutant stalkers, each have different special powers that can be utilised in different circumstances because all animals are equal, but some are more equal than others…

Sadly, this game is not set on a farm, but is instead set in a skeleton-strewn Sweden, years after an environmental catastrophe, plague and nuclear war have hit. In what is a fairly cliché post-apocalyptic world, most of humanity are no longer and the game’s areas are in gigantic ruin. Amidst all of this, a population of human survivors are living in one of these areas, known as The Ark. The mutant stalkers must set out to find a member of The Ark settlement, who has gone missing. Along the way, enemy encampments, weapons chests, and caches of scrap and weapon parts will be
encountered. These can be used as currency to buy gear and upgrade weapons at the Ark.

Through turn-based strategy and real-time exploration, players will encounter combat either when purposefully initiated or if exploration leads into an enemy’s awareness radius. Where this game comes into its own is through its more coherent and tactful turn-based strategies. Real-time stealth allows full control of approaches, with the ability to sneak into an enemy camp, position the team of Mutants to your advantage, and gain an element of surprise. This makes the game much more versatile than what you might expect from your average RPG, with the added benefit that once an area in the game is cleared, it then remains safe. In this game, having the right gear, the right plan, and the right amount of luck all matter so that when you successfully plan out and defeat the enemy, it is extremely satisfying.

So what’s the verdict?

PC Gamer have given Mutant Year Zero: Road to Eden a rating of 81 on the basis that the game has a great blend of sardonic humour, grim detail and cartoon excess through the game’s anthropomorphic pig, duck and fox. This game has done very well at addressing gameplay features that many strategy games fail to do, for example, Road to Eden always ensures you have information to make good decisions and use clear hit rules. IGN have rated the game at a relatively similar 7.9, or ‘good’, praising the interplay between stealth and combat that brings an interesting and intense new perspective on turn-based tactics that teases your brain in interesting ways. Along similar lines, the Metacritic reviews award a 78 to what is described as an “unapologetically hardcore, deliciously twisted take on the turn-based tactical combat genre”.

According to PC Gamer, however, the game doesn’t ever fully deliver on its potential and feels fairly unfinished. They found that the skills were barely learnt, and new characters hardly developed before the game ended. IGN criticise some mechanics that don’t quite mesh perfectly with gameplay and say that periods between enemy encounters can become a bit mundane.

Despite some negative comments, you are strongly advised to give the game a go, if not for the vague Animal Farm resemblances, then the dry humour, intriguing anarchy, and deeply satisfying tactical gameplay. Buy your copy for a great price now at Green Man Gaming!