Raid: Shadow Legends is a mighty, meaty strategy RPG with lots to discover and master on your journey to the late game. With different modes, lots of champions, and more to learn about, you might need a guide so you can get started with absolute confidence.

We’ve assembled some essential tips and tricks so you can begin your journey to becoming a legend in Raid: Shadow Legends. Let’s go!

When you start the game you’ll be given your first choice, which champion to choose. With four to choose from and all at the Rare level, it can be a difficult decision. We recommend choosing either Kael or Athel as your starter in Raid: Shadow Legends. Either one can take you all the way to the late-game.

When you check out champions in the game you’ll notice they each have an affinity. Their affinities give you a rough guide to their strengths and weaknesses vs. other affinities, much like rock, paper, scissors. Here’s what they mean:

In addition to these three affinities, you’ll also see Void. Void is different in that it is equally strong in all situations, meaning there’s no special counters for a Void champion but neither is a Void champion particularly strong against any other affinity.

This can’t be understated. It doesn’t take long to do the dailies, and the rewards are well worth your time. Even if you don’t have much time to devote to the game each day, diving in to do your dailies is essential. Your future self will thank you for gathering resources.

Hang on to Void, Epic, and Legendary Champions

Whilst you will eventually know which champions you want to keep hold of (and you can check out our tier list to make sure you know who’s who), at the start if you find a Void, Epic, or Legendary champion we recommend keeping hold of them. They can be difficult to get hold of so once you have them, keep them.

Attempt the Progress Missions if you need Pointers

The progress missions have been created specifically to act as an introduction to the game’s systems, meaning that they can be a great guide to Raid: Shadow Legends. Each one has been made to expand upon systems you learned in the tutorial, so if you need a few extra pointers, we definitely recommend checking them out.

Check out the Campaign

Whilst it’s true that dungeons will give better rewards then the campaign,the rewards from the campaign will see you in good stead to progress further in the dungeons than if you hadn’t campaigned first. Also, you get to immerse yourself in the story, which is an essential part of the game’s experience.

Sometimes you need to Grind

Grinding is part of the game and can give you exceptional rewards or help level up champions that are lagging behind. Don’t be afraid to dive in for a spot of grinding here and there, even if it’s just to test a new champion out and see what they’re capable of.

There’s a lot to see and do in Raid: Shadow Legends, so don’t be afraid to take your time when playing. You don’t need to rush to the late game, you can learn the systems, find champions you like, and spend your time the way you see fit. In addition, trying challenges that are too hard may see you meet with failure, and no-one wants that.

Upgrade your Mine, Market, and Sparring Pit

Each of these are essential especially if you’re committing to the long haul and planning on playing the game for a while. The Gem Mine helps get you gems, the Market is excellent for getting artifacts and blue shards, and the Sparring Pit gets you plenty of XP.

This applies to both skills and equipment. If you like a champion, make sure you upgrade them to be competitive as you progress through the game. Use Tomes to improve their skills, earn experience and level them up, and as you play you’ll find gear that you can equip which can also be upgraded. Throughout the game you’ll find multiple opportunities to upgrade and enhance your characters, so make sure you keep them fighting fit.

With our guide you should be able to dive into Raid: Shadow Legends and not only survive, you should thrive. Soon you’ll be a legend, ranking highly, defeating bosses, and wearing the finest gear on the strongest champions. Good luck on the battlefield. 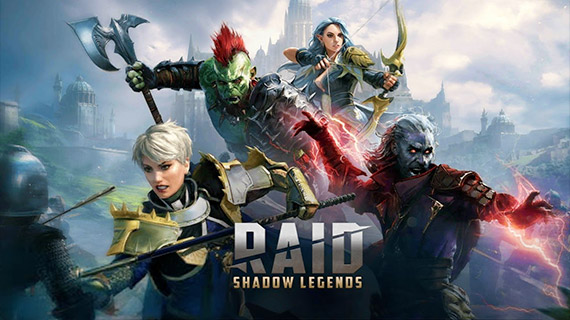 Dread hangs low in Teleria, churning with ill omens. Encounter an expansive range of strategy, innovative blended PvE and PvP gameplay modes, peerless character skill customization, and explosive clan-centered cooperative play. Join players from across the world and stamp your name among the heroes of Teleria.

This Path of Exile guide will introduce you to the basic concepts you will need to make it through the game. So if you've always wanted to take a stab at the game but never felt you were quite ready read on!

Guild Wars 2 Mounts – How To Get A Mount

When figuring out the best way to approach any potential battle there are lots of things to consider. Which angle of attack is best? Who should I focus on first? Can I do a superhero landing? What animal should I ride in on?