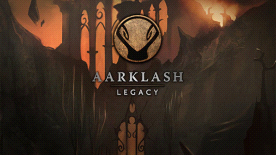 Aarklash: Legacy -- Copyright © Cyanide SA 2013. Aarklash, Rag’Narok, Confrontation, Cadwallon and all associated marks, logos, places, names, creatures, races and race insignia/devices/logos/ symbols, characters, products, illustrations and images from the Aarklash world are either ® , TM and/or © Cyanide SA 2003-2012, registered in FRANCE or UE and other countries around the world, and used under license. All Rights Reserved. All other trademarks, logos and copyrights are property of their respective owners.