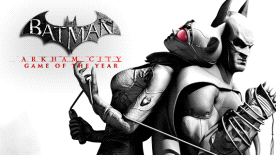 BATMAN: ARKHAM CITY GAME OF THE YEAR EDITION software © Warner Bros. Entertainment Inc. Developed by Rocksteady Studios. Developed for and published on the Mac by Feral Interactive Ltd. Unreal® Engine, copyright 1998-2012 Epic Games, Inc. Unreal, Unreal Technology and the Powered by Unreal Technology logo are trademarks or registered trademarks of Epic Games, Inc. Uses Scaleform GFx © 2012 Scaleform Corporation. Powered by Wwise © 2006 - 2012 Audiokinetic Inc. All rights reserved. Mac and the Mac logo are trademarks of Apple Inc., registered in the U.S. and other countries. Feral and the Feral logo are trademarks of Feral Interactive Ltd. All other trademarks and copyrights are the property of their respective owners. All rights reserved. BATMAN and all characters, their distinctive likenesses, and related elements are trademarks of DC Comics © 2012. All Rights Reserved. WB GAMES LOGO, WBIE LOGO, WB SHIELD: ™ & © Warner Bros. Entertainment Inc. (s12)