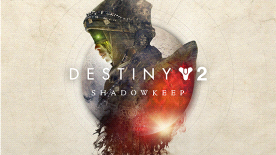 A Steam account is required, which can be obtained for free at https://store.steampowered.com/join. Please note that by purchasing this product, your Steam Account will be shared with Bungie, Inc.

The exclusive Hive-themed Ornament for the Two-Tailed Fox can be attained by pre-order of digital editions of Destiny 2: Shadowkeep or by purchase of the Digital Deluxe Edition.
Subject to change and availability.

Minimum 105 GB available hard drive storage space required as of October 1st 2019. Storage requirements subject to increase. After October 1st 2019, see https://www.bungie.net/en/Help/Article/12128 for current requirements prior to purchase. May require additional storage for set-up, features and updates, including to download mandatory in-game updates to continue playing. Users responsible for fees for broadband internet, which is required. Additional charges may apply for online content and features

Using the software constitutes acceptance of the Destiny Software License Agreement at www.bungie.net/sla. Bungie may modify or discontinue online services without notice at any time.

© 2019 Bungie, Inc. All rights reserved. Destiny, the Destiny Logo, Bungie and the Bungie Logo are among the trademarks of Bungie, Inc.