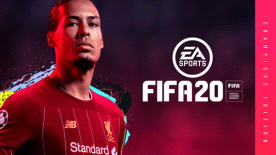 INTERNET CONNECTION; EA ACCOUNT; ACCEPTANCE OF EA USER AGREEMENT (terms.ea.com) & ORIGIN END USER LICENSE AGREEMENT (ea.com/legal); INSTALLATION OF THE ORIGIN CLIENT SOFTWARE (origin.com/download) & ACKNOWLEDGEMENT OF EA’S PRIVACY & COOKIE POLICY (privacy.ea.com) REQUIRED TO PLAY. ACCESS TO SOFTWARE CONTENT IS LIMITED TO ONE EA ACCOUNT & IS NON-TRANSFERABLE AFTER PURCHASE. YOU MAY NEED TO BE 16+ (13+ IN THE UK) TO ACCESS ONLINE FEATURES (AGE MAY VARY, SEE http://o.ea.com/ea/child-access FOR DETAILS). EA MAY PROVIDE CERTAIN FREE INCREMENTAL CONTENT &/OR UPDATES. ADDITIONAL CONTENT WILL BE DOWNLOADED TO YOUR DEVICE AUTOMATICALLY. YOU MAY HAVE TO PURCHASE THIS CONTENT SEPARATELY. CONTENT DOWNLOADS MAY REQUIRE ADDITIONAL STORAGE OR INCUR BROADBAND USAGE FEES. SOFTWARE COLLECTS DATA FOR IN-GAME ADVERTISING. EA MAY RETIRE ONLINE FEATURES AFTER 30 DAYS NOTICE POSTED ON ea.com/service-updates. FIFA POINTS NOT SOLD IN BELGIUM.