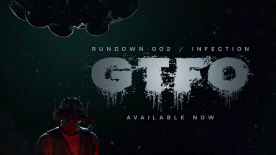 "The Warden has a new objective for you."
What will Rundown 002 / Infection include?

The update will include new expeditions, weapons, enemy (or enemies?) and more - with a name hinting its theme.
Among tweaks, such as improved weapon sounds and a new on-screen liquid system, this new Rundown will give you:

GTFO is seriously hard, you need dedication and teamwork to survive! This is not a run and gun game, please watch a stream or a YouTube clip so you know what you are getting into.

GTFO is in Early Access for a reason. We are still shaping the experience into what we envision it to be.

At launch, GTFO contains 6 levels accessible through the “Rundown” feature (read more about it further down in the “key features” section)

GTFO is NOT for everyone! Only buy this game if you are ok with the following: