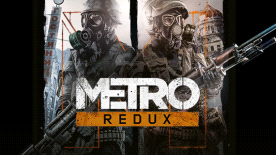 © and published 2014 by Koch Media GmbH. Deep Silver is a division of Koch Media GmbH, Gewerbegebiet 1, 6604 Höfen, Austria. Developed by 4A Games. 4A Games Limited and their respective logo are trademarks of 4A Games Limited. “Metro 2033 Redux”, “Metro: Last Light Redux”, “Metro Redux” are inspired by the novels “Metro 2033” and “Metro 2035” by Dmitry Glukhovsky. All other trademarks, logos and copyrights are property of their respective owners.