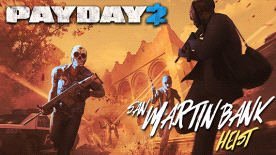 This product requires the base game PAYDAY 2.

"PAYDAY 2 ®” and "OVERKILL A STARBREEZE STUDIO®" are registered trademarks of STARBREEZE AB (Publ) and New Starbreeze Publishing AB and/or its affiliated companies in the United States and other countries.
All other trademarks are properties of their respective owners. All rights reserved.