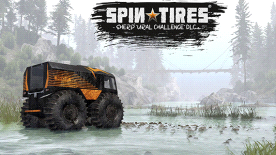 This product requires the base game SPINTIRES.

© 2020 Spintires® developed by Oovee® Games, a trading name of Oovee® Ltd. Spintires® is a registered trademark of Oovee® Ltd. All rights reserved. Spintires® uses Havok® © 1999-2008 Havok.com Inc. All rights reserved. See www.havok.com for details. All other trademarks are the property of their respective owners. All characters and vehicles appearing in Spintires® are fictitious. Any resemblance to real-life persons (living or dead), or real-world vehicle designs, is purely coincidental except where licensed. SHERP® is a registered trademark of Quadro International LLC and is being used under license.