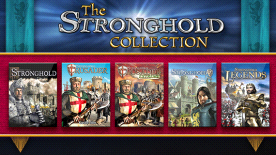 ©2009 Firefly Studios, Ltd. Stronghold, Stronghold 2, Stronghold Crusader, Stronghold Crusader Extreme, and Stronghold Legends ®, FireFly Studios and the FireFly Studios logo are trademarks of FireFly Studios. 2K Games, the 2K Games logo and Take-Two Interactive Software are all trademarks and/or registered trademarks of Take-Two Interactive Software, Inc. The ratings icon is a trademark of the Entertainment Software Association. GameSpy and the "Powered by GameSpy" design are trademarks of GameSpy Industries, Inc. © 1999-2009 GameSpy Industries, Inc. All rights reserved. Uses Granny 3D, Copyright © 1999-2009 by RAD Game Tools, Inc. Uses Bink Video, Copyright © 1999-2009 by RAD Game Tools, Inc. Uses Miles Sound System, Copyright © 1991-2009 by RAD Game Tools, Inc. LIFESTUDIO:HEAD™ 2.6 SDK Copyright © 2001-2009 by Lifemode Interactive. All other marks and trademarks are the property of their respective owners. All rights reserved. The content of this videogame is purely fictional, is not intended to represent or depict any actual event, person, or entity, and any such similarities are purely coincidental. The makers and publishers of this videogame do not in any way endorse, condone, or encourage engaging in any conduct depicted in this videogame.