There’s more to A Hat in Time than meets the eye. Each level in the Unreal Engine-powered platformer is bursting with detail - so much so that in order to see all the bits the developers included, you have to get fresh with a few developer commands and go snooping about in ghost mode. Besides that, Time Rifts offer gateways to secret levels if you can locate them. Here’s how to do that, and where to look for all the secrets lurking throughout the game.

To access the developer console commands, first you’ll need to find the ‘Developer Console’ option in ‘Game Settings’ and tick it. Now restart the game, and press ~ or tab to bring up the console. Type ‘enablecheats’ and hit enter to - you guessed it - enable cheats. The final console command you’ll need to begin your level sleuthing in search of secrets is ‘ghost’, which works like a ‘noclip’ cheat in that you can float around with no object or surface collision and access parts of each level that you wouldn’t ordinarily be able to.

Use the ‘ghost’ cheat to fly the camera into the toybox in the very first room of the game - you’ll see quite a large knife in the back corner - certainly not standard issue toybox clutter, that. Underneath the toolbox on the desk, you’ll also find a letter. It reads: “I.O.U. half a cookie. Check kitchen. R. King.”

There’s a Time Rift in this level that unlocks a secret stage, too: from your bed at the start, head through the purple corridor out from your room and into the main control room. See the gold chute there? Propel yourself up it and you’ll find a messy office with piles of paper everywhere, but completely empty ‘in’ and ‘out’ trays - someone’s not so great at paperwork. Anyway, behind the desk lies the Time Rift. Now take the red door to the right of the chute when you slide back down it, then the green door. You’ll end up in an art gallery with a Rift in the middle.

A Hat in Time - Welcome to Mafia Town secrets

Head into the bathroom in this level and check out what’s behind the closed toilet stalls - a Mafia Town denizen is standing in one with an awful lot of brown water flowing from the toilet, and the letter ‘S’ in the toilet bowl itself. A couple of stalls over, in a bloodsoaked stall, there’s a letter ‘M’ behind the toilet seat - or is it a ‘W’?

There’s also a secret level accessible in this level that doesn’t require any console commands to find. Simply follow the path at the start of the level until you reach a blue bridge, then jump off the end of that bridge, aiming to the right, and land on the broken pipe halfway down the righthand wall. You’ll discover a Time Rift that’ll take you through to a secret level full of rotating platforms.

You can find another Time Rift on the upper levels of this stage, after you cross the stream and enter a marketplace with some Mafia goons selling cheese and fish in their stalls. Head down to the rubble-filled doorway and you’ll find Time Rift 2.

A third Time Rift is located on the top of a parasol on the beach - head right out from the rubble-filled doorway and continue along the grey rocks until you reach the beach.

A Hat in Time - Battle of the Birds secrets

In the first chapter, Dead Bird Studios, look for the tall red-fronted house and jump up onto its roof - on the left side you’ll see a tiny platform you can jump down onto, where the Time Rift is located. Remember, you can always use the ‘ghost’ command if you’re getting stuck figuring out a route up there, but there’s always a path to each Rift that doesn’t require console commands.

Now in act 2, Murder on the Owl Express, head to the third carriage along and look for the dining area on the left hand side to find another Rift.

Later on in act 5, The BIg Parade, there’s another Rift on the canopy of the green building behind the big red ‘Grooves’ building. You can access if by jumping across the rooftops and telegraph wires from your high starting point at the beginning of the level.

In act 5, Mail Delivery Service, there’s a Rift located at the glowing blue crystal formation in the forest - this can be slightly tricky to find since much of the woodland looks similar, but the crystal is huge and visible from quite a distance. If you head immediately backwards from the level start point and stick in the direction you face as you head through the gap in the fence, you’ll get to the vicinity.

The next Time Rift is even trickier to locate - look for four autumnal trees that form a staircase into a fenced area. There’s a platforming sequence that takes you upwards, so follow it until you make it to the second tower, then double back on yourself and land on the flat roof of the first tower - a Time Rift awaits.

There’s a third Time Rift located in an old pipe further south in the same area - look for a large circular structure made of dull metal, with pipes of different sizes protruding from it. Jump up onto the roof and you’ll find the Rift.

Starting at the beginning of the level, head right at the crossroads and you’ll find a Rift in the area just beyond it - easy start! The next one’s trickier, though, and has been moved in recent updates. Use the zipline on the next floating island to the right to reach Windy Passage (wahey!) then use the windmill arms to climb to the next level, and grab the next zipline. You’ll arrive at Curly Tail Horn Trail. Look for the red house with leafy thatching near the windmill in this area, and a Rift is yours up on the roof itself.

Now in Mountain Peak: The Twilight Bell, another easy one: just use the bushes in front of you to jump up on top of the tree at the level start location. Boom! Time Rift. If only they were all that simple, eh? 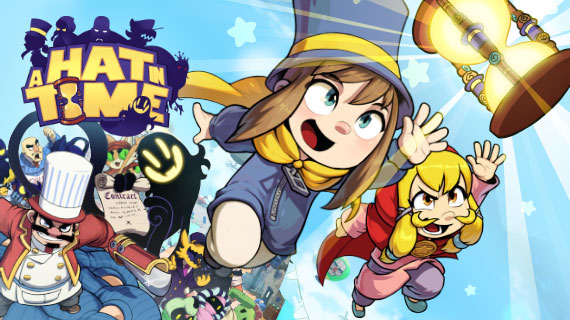