Battle Royale On the Open Seas?! Exactly what is Maelstrom?

Gaming in 2018 is all about being the last man standing. But what happens when you take the familiar pillars of battle royale games and take them to the high seas? Maelstrom is what happens: a 16-player multiplayer experience that’s all about being the last ship sailing. There are Moba elements to explore and persistent upgrades for those who love being rewarded for putting in the hours, while battle royale tenets find a new spin in its naval combat. Let’s drop anchor and take a closer look.

Lurking around the archipelago of Maelstrom’s game map are 16 players manning ships of varying sizes, loadouts, and alignments. Sharing the waters with them are AI-controlled minion ships. All ships drop bounty when they’re sunk, so you can really buff your own vessel by hunting these minions, then enter a fight against a human ship with an advantage.

Success in naval combat encounters comes down to a few key elements: armour, loadout, and skill. Each side of your vessel has its own armour rating, so if you’re hit consistently on your starboard side its armour rating will eventually deplete completely, leaving you vulnerable on that side. However, the port side will still have a full armour rating, so you can position yourself so that only this side is targetable by enemies.

Then there’s your loadout, or where you positioned your guns. Some might have guns on each broadside, others on the aft and stern. We’re no salty old seadogs, but we can tell you that sailing straight at an enemy without any cannons pointing in that direction limits your options a bit.

Skill comes from factoring these variables into each combat encounter, knowing when to engage with an enemy and when to back away, and how much time to spend fighting minion ships in order to collect their bounty. The basics become apparent after just a couple of rounds, but the subtleties take much longer to master.

In a nautical spin on the battle royale diminishing zone, the waters in Maelstrom become populated by fearsome sea monsters over time. How do you know? The sea turns an ominous inky black, for one. The ship-sized shark fins are another giveaway. Like the zones of Playerunknown’s Battlegrounds and Fortnite, being caught outside the zone doesn’t kill you outright. Instead, you have a limited amount of time before attracting the attention of the horrors below , which means that bounty you can see floating on the horizon just might be retrievable. Once the monsters attack though, it’s game over, man: they’re one-hit shipwreckers.

Ships are grouped by the fantasy race who designed them in Maelstrom. The humans have Ashborne, which boats great speed, range, and a unique incendiary attack which sets enemy warships ablaze.

The Orcs take a different approach - don’t they always? - preferring a more agile ship designed for boarding, pursuing with cannons at the aft, and good old-fashioned ramming into enemy vessels. It’s almost a melee combat approach to naval warfare, and really you’ve got to hand it to the greenskins for that.

Dwarves like sturdy designs, so they’ve gone ahead and built their ships from steel. As in steel, that famously heavy metal that rusts with prolonged contact with water. Still, it’s a formidable vessel in combat, featuring heavy armour, omnidirectional cannons, and the ability to reverse. Those crafty dwarves have designed the right cogs and gears, alright. 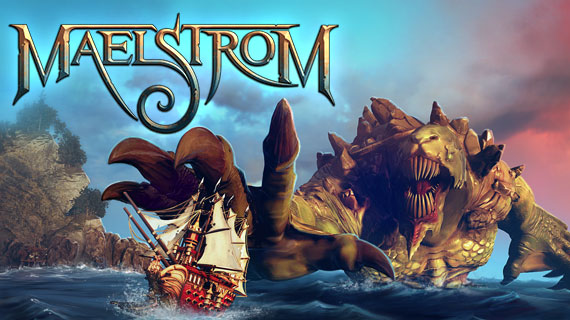