What Makes Qube 2 Such An Interesting Puzzler?

Player-character Amelia Cross is suffering from a spot of convenient amnesia which bestows her with precisely as much knowledge of the bizarre structure she finds herself in as the player has. Fortunately commander Emma Sutcliffe has established radio comms, albeit with frequent dropouts - you just can’t get the coverage on ominous alien ruins these days. As the two communicate, their characters shine through - two strong, capable women, one with clear and relatable motivations, and the other a bit more suspicious. We can all relate to Amelia wanting to get home and pet her dog, but what’s Emma really up to? She says she’s helping, but we’ve all been stung with that one before - isn’t that right, Wheatley?

Unusually for a puzzle game, Qube 2 takes pains to build up a sense of place, placing greater meaning on your surroundings than simply a path full of obstacles to solve. The alien structure where Amelia wakes up at the start of the game is a third character, in a way, its unusual architecture and cryptic symbols propelling the plot forwards with a sense of intrigue. Commander Sutcliffe’s team have been tracking the alien structure for a long time, trying to make sense of it, but they know nothing about the beings who made it. Which is a bit of a worry if, like Amelia, you’re stuck on it. You can go ahead and add ‘the entire structure’s on a collision course with planet Earth’, too. As the story unfolds Amelia learns to communicate with the alien beings, but sadly never gets the chance to ask where they learned to design such devilish puzzles.

The gloves in your suit are capable of producing three different tile types, each with distinct properties. Turning tiles blue turns them into super-sprung trampolines, which can be used to bounce over obstacles and up to previously inaccessible areas. Red tiles can be pulled towards you, creating a bridge, platform, or elevator, depending on its angle. Again, super handy for reaching those higher spaces. Finally, green blocks can be materialised from nothing, which is useful if you need a leg-up over a ledge, or if a particular puzzle requires a switch in an inaccessible location to be hit. The interaction between these three abilities makes for some challenging and unusual puzzles - often it feels as though you improvised your way through a challenge in a way that the developers couldn’t possibly have conceived. Which is the whole point, of course.

Other elements to consider in each puzzle room are surfaces with switches that can be activated to move them. Floors and wall surfaces can all be rearranged, meaning Amelia sometimes finds herself in the middle of a giant rubix cube of moving parts. Fire hazards also feature, and although they’re not so great for Amelia’s wellbeing they can be used to form a solution - creating a green cube and setting it alight might activate a particular switch type. And despite the game’s nomenclature, cuboids aren’t the only puzzle elements here. Certain areas contain dispensers of marble spheres which must be guided along a particular path - think Screwball Scramble on an alien vessel with humanity’s future at stake and you’re basically there. As all these elements combine with one another, the puzzles grow in complexity and make sterner demands of the player over time. Keep your physics textbooks to hand. 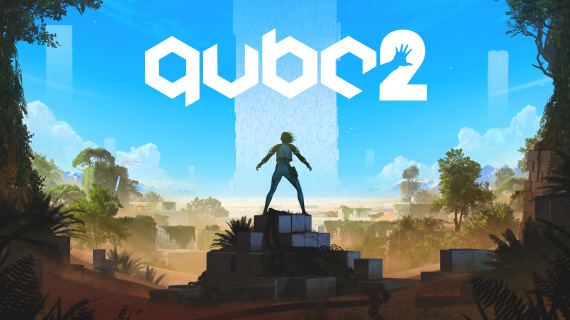