What’s Next For The Darksiders Series?

After quite the hiatus since Death walked the earth in 2012, Darksiders is soon to return in 2018. Developed by Gunfire Games, with many former Vigil developers among their ranks, the third Darksiders game picks up the apocalyptic action-adventure right where it left off: responsive hack ‘n’ slash combat, puzzles, boss fights, and plenty more besides. Here’s what to expect.

After leading roles for War and Death in Darksiders I and II respectively, it’s time for Fury to take the lead in the third game. The first female protagonist in the series, Fury fights primarily with a whip but also has magical abilities to call upon. She’s described as the most unpredictable and enigmatic of the four horsemen - that certainly explains the full face tattoo she’s sporting.

As in previous Darksiders titles, Earth is the setting for the story, but it’s a different place than the one we call home. The seven deadly sins, long ago defeated by the four horsemen, have returned and turned the place into seven varieties of ‘absolute mess’, and guess who’s on cleanup duty?

Structurally, each of the deadly sins must be defeated in a boss fight encounter in order to vanquish their threat and return the world to normality, with Sloth presenting the first fight. Taking the form of a giant bug with a long range melee attack and a charge, it’s terraformed the surrounding area and covered it with rather unpleasant bugs and organic matter which frankly looks like it would smell terrible. The area occupied by each sin is distinct, so expect different colour palettes, environments and enemy types for all seven.

Developers Gunfire have stated that they don’t want the entire world to look brown and destroyed, though - in several areas The Makers (an ancient race of quasi-godlike beings) have restored the surroundings to their leafy splendour, so it’s not all doom and gloom.

The quickness of Fury’s combat falls roughly between that of War and Death from the previous games, with her whip attacks friendly to combos and counters. Fury is able to attack while in mid-air and juggle opponents using her whip, and several other weapons that have yet to be announced. Along with several returning enemies from previous games, many new enemy types related to each of the seven deadly sins feature in Darksiders III.

In keeping with the prior games’ RPG systems, you’ll be able to upgrade Fury’s abilities and level up her weapons to deal increased damage. New moves and combos can also be unlocked. In Darksiders II, weapon upgrading worked in quite an unusual fashion, with possessed weapons that required other weapons to be fed to them in order to boost their stats. It’s yet to be seen whether this mechanic will return, or be replaced by something new. 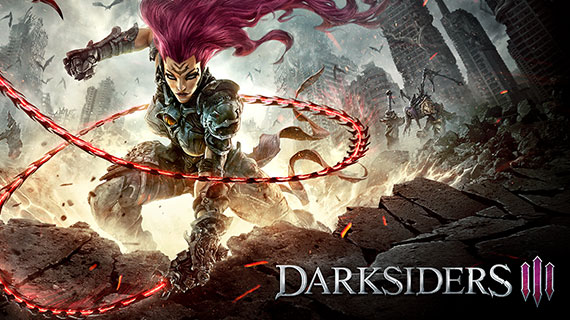