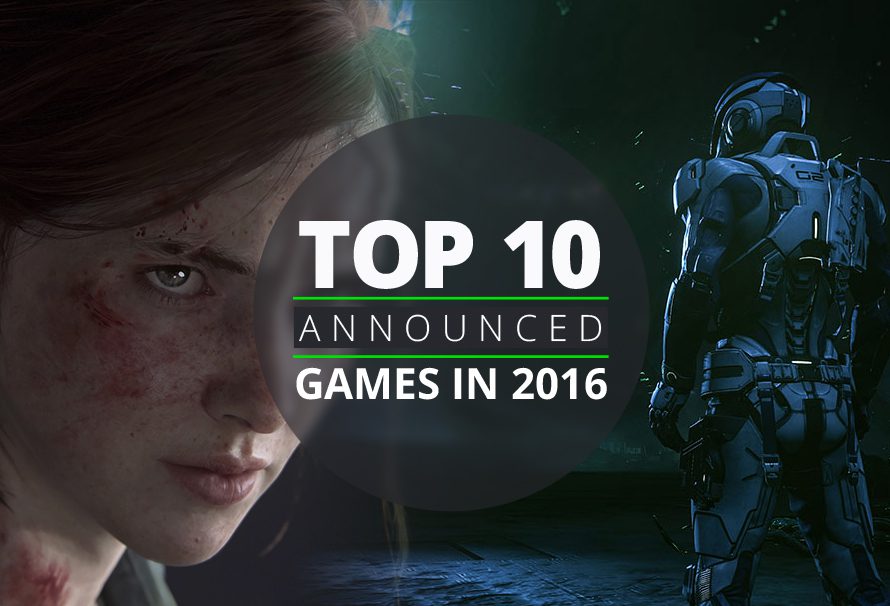 As 2016 draws to a close and with the release of some of the finest new games in the industry, we take a look at what we can expect to see moving forward. Here are a few of our favourites that we can’t wait to get our hands on within the next year or so.

There has been a lot of gameplay footage released on Prey recently and we’ve had glimpse of the game’s core features and story, dazzling between humour, sensitivity and fear. It’s not a sequel or even related to the 2006 Prey, which is what I love about it. A fresh story, that looks incredibly fun and intriguing.

As a huge fan of Heavy Rain and Beyond Two Souls, I’m so excited for this futuristic game, that seems to settle between the two in a really emotive way. Quantic Dream always get stories bang on and with a trailer already out there, it’s set to be a controversial and beautiful story.

Naughty Dog recently announced The Last of Us 2 at The PlayStation Experience, much to fans delight. As the first in the series left us wanting more and since the release of the trailer, we’re sure we will be taking on the role of Ellie, in this wonderful journey, that makes the zombie apocalypse feel like a brand new genre.

After the short lived hype of P.T and all of the drama around Hideo Kojima rising from the ashes of Konami, everyone is dying to get their hands on Death Stranding. Personally, I’m not just a massive Kojima fan but I also love Guillermo Del Toro! So for me this is a match made in heaven. A game that brings together brilliant actors, a big movie director and one of the biggest names in gaming has got to be good. If the trailer is anything to go by, this game is going to be story driven, utterly engrossing and weird. And it’s got our main man, Mads Mikkleson in it. Who doesn’t love a bit of Mads?!

I  have to admit, I was a bit weary of Resident Evil 7 at first. I’m a massive fan of the franchise and I thought that it may be too much of a step away from the format we all know and love. The trailers made it seem like a clone of P.T or Outlast, but after playing the First Hour demo I am SO overly excited for this game. If it’s even a 10th as uncomfortable and in depth as the demo, it will be amazing. The puzzles and story that are packed into such a short demo are mind blowing. I cannot wait to jump back into the Mansion next month!

I don’t know if I’m prepared for all of the survival horror that’s coming our way in 2017!  But I’m excited to throw on my UnderScares and get stuck into Outlast 2. This time, instead of being trapped in the wonderful cliché that is an insane asylum, we get to venture into the Arizona desert. “to a darkness so deep that no one could shed light upon it”. Urgh, it sounds terrifying. Similar to the first Outlast, this game seems to carry a heavy religious theme. You can see what I’m talking about, in the trailer here.

The very idea of machines taking over the world has always appealed to me. Not that I want the human race to fall victim to the machine uprising, it’s more the story of the human race overcoming their machine overlords that appeals to me. Horizon Zero Dawn’s spin on this idea looks awesome, The fact that the world has been over run by what can only be described as Robot Dinosaurs is pretty cool. The game play also mixes Far Cry with Uncharted, which ticks a lot of boxes for me.

South Park The Fractured But Whole

South Park: The Stick Of Truth was the perfect marriage between the awesome TV show and the Classic turn based RPG. I lost many hours playing The Stick Of Truth, so to say I am excited about The Fractured But Whole is an understatement. This time around the focus has moved from fantasy to superheros, which again ticks another box for me being quite the comic book nerd.

It’s nice to see that BioWare are expanding the Mass Effect universe beyond the classic Shepard trilogy. This time around the human race is reaching out further into space, your task is to explore the Andromeda galaxy for new life and habitable planets. What has me most excited about this game is the battle system, the 3rd shooter action looks insane with the mix of abilities and weapons.

The Spiritual successor to Banjo Kazooie if finally coming! Yes before you ask I did back the initial Yooka-Laylee kickstarter so this is easily one of my most anticipated games of 2017. I played a brief demo of this back at EGX this year and it is the perfect mix of nostalgia and great puzzle gameplay. This 3rd person 3D platformer is bound to steal the hearts of most if not all gamers young or old.

It’s been a great year for games and with a series of gaming industry announcements shaking up the end of 2016, we here at Green Man Gaming can’t wait for what 2017 holds, hopefully some immersive open worlds and mind-blowing local co-op, yes please!