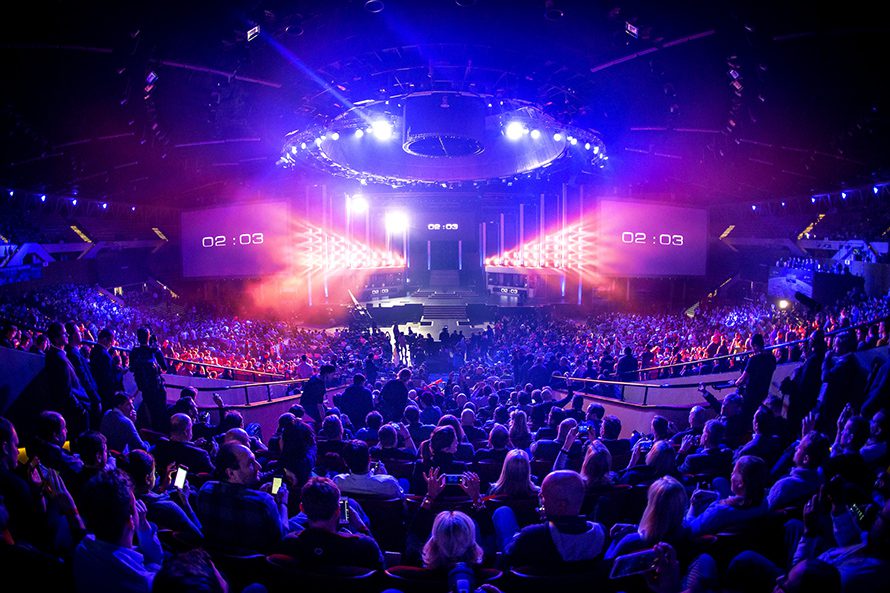 There’s a plethora of esports action on the menu this weekend as ever with the Spodek waving goodbye to competition for another year. Last week, the Spodek welcomed Dota 2 for the first time in its history and a major champion was crowned. Coincidentally, it was Virtus.pro’s Dota 2 team that took the title in front of a raucous crowd.

Everyone knows that VP’s Counter-Strike team love the Spodek, and the home crowd love the best Polish esports players. However, they won’t appear on the stage at IEM for the second consecutive year after a disappointing performance in the group stages. Instead, we’re down to just five teams and by the time the doors open tomorrow there shall be just four. There’s been no shortage of iconic esports moments in the Spodek – be it xPeke’s epic play for Fnatic’s League of Legends team all those years ago or Team Secret being backdoored by Fnatic’s Dota 2 team just last week.

Another team will emerge victorious come Sunday evening and etch their names famously in esports history. If the past is anything to go by, we’re set for a sensational conclusion to the tournament. It’s definitely not one to miss.

For those interested in anything other than Counter-Strike, there’s the conclusion of the StarLadder PUBG $100,000 tournament in Kiev, League of Legends regular season matches and the Overwatch League continues as always.

Astralis, FaZe, Fnatic, NiP and Liquid to battle it out for IEM honours

IEM Katowice is a title that every player wants on their list of honours. Although ELEAGUE held the Major just weeks ago, Katowice and the Spodek almost always feels up there with the very top tier of competition. The odd, spaceship like arena lights up for esports action and the public queue for free tickets from midnight the night before.

Spectators don their favourite teams jerseys and after an opening ceremony, gaze starstruck at a mightily impressive stage built with several LED panels. Each frag and near miss is met with audible roars or excruitiating gasps as each and every fan cheers on their team. It’s different here though. Don’t get me wrong, there’s rivalry between teams but each and every fan has the common desire to watch the very best Counter-Strike played in front of arguably the loudest esports crowd on the planet. The first match to grace the main stage was an absolute treat and so if the weekend is to follow then no one will be complaining.

In a rematch of the Major final, C9 faced off against FaZe Clan. It followed a similar theme, too. Cloud9 got battered on their own map pick before battling back to beat FaZe on Cache – the latters pick. The game ultimately boiled down to Inferno where a moment of controversey arguably changed the game. GuardiaN disconnected and ESL ruled that the round should be replayed – although by the rule book it likely shouldn’t have. As a result, FaZe went to map point before C9 forced overtime. Inferno was the very map in which the two CS:GO juggernauts battled it out in the final map of ELEAGUE Major: Boston. Back then, it was an overtime that Cloud9 will eventually take and be crowned victorious. This time, though, the opposite happened. In an almost mirror match of the final a few weeks back, FaZe would come back from 14-11 to take the match to overtime before capitalising to win the match and series overall.

That’s not the tournament over though. In fact, it’s arguably only getting started. Tomorrow there’s the mouth watering prospect of Danish stalwarts Astralis facing off against former teammate KarrigaN in the first semi-final whilst Fnatic await the victor of Ninjas in Pyjamas and Team Liquid. With big names such as SK Gaming and G2 Esports falling in the tournament, not many expected Fnatic to directly make the last four nor for Ninjas and Liquid to make it through to the final eight. Alas, in a tournament that has thrown up a fair few surprises – we wouldn’t be shocked to see someone like Liquid go all the way. The Ninjas have looked patchy in form at best, but there’s no one in the esports world that wouldn’t love to see Ninjas in Pyjamas versus Fnatic in a Swedish derby on the main stage at the Spodek.

Sunday will see the end of the action at the Spodek Arena for another year. A quintessential esports hub will wave goodbye to the thousands that flock to the venue each and every year as the world continues with more standard routine.

Until then though, there’s a whole lot on the line. KarrigaN’s rivalry with Astralis is always one to watch and then there’s the mouth watering prospect of Fnatic against either Ninjas in Pyjamas or Team Liquid. If it’s NiP, it’ll be like a flashback to year ago when they were two of the very best on the planet. The tournament is most definitely not one to miss – so make sure to catch some of the very best Counter-Strike you’ll see this year over the weekend.