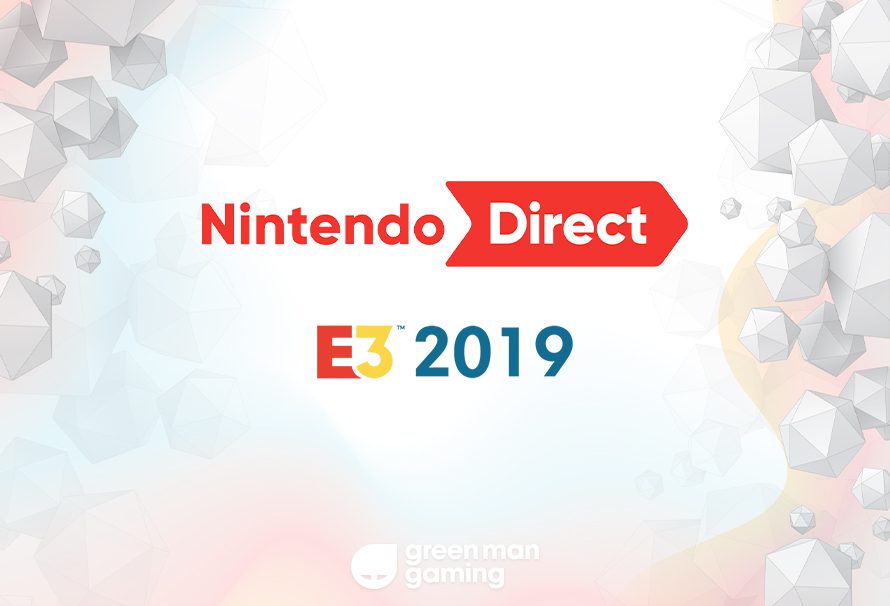 Nintendo Directs are all about one thing; the games. No mess, no cars on stage, no influencers being interviewed. It’s just game after game after game.

Check out all the announcements at the E3 2019 Nintendo Direct below, and if you missed any of the other conferences, why not head over to the Green Man Gaming blog for all the updates you need.

Dragon Quest XI characters are being added to Super Smash Brothers Ultimate in Summer 2019. In particular, the Akira Toriyama-designed hero of the game will be playable.

Dragon Quest XI is coming back to Switch with a definitive edition, adding new modes, expanded content, and all the amazing Dragon Quest XI jRPG action you need. Coming September 27, 2019.

The spooks are back, but don’t be scared – Luigi is here. Invited to a beautiful hotel, he finds that the building has a darker side. With his handy torch and ghost hoover, Luigi can sweep up the supernatural in no time. Luigi’s Mansion 3 takes the series to a new location, and adds a series of new moves and abilities to make fighting spirits a doddle. Luigi even gets a gooey clone, named Gooigi, helping you solve puzzles and allowing co-op. A ScareScraper Mode is a full multiplayer experience for multiple players, facing ghosts in groups. Luigi’s Mansion 3 will be released in late 2019.

Netflix and Nintendo team up for a new game based on the Dark Crystal. Sorry to all who find the Skeksis terrifying – they’re back in this Final Fantasy Tactics-a-like strategy game.

The Legend of Zelda: Link’s Awakening

This remake of the Game Boy Legend of Zelda is just stunning. With an art style and camera angle that makes it look and feel like you’re playing with handcrafted toys. In addition, it’ll contain a dungeon creator. Add rooms you’ve defeated to build custom dungeons then defeat your creations to win big rewards. Planned for a September 20, 2019 release.

Coming to Switch is a remake of one of the best games on the SNES. Seiken Densetsu 3 was a sequel to Sword of Mana and unfortunately was never seen outside of Japan. Now, with a full revamp, it’ll be coming out in 2020.

Speaking of Seiken Densetsu 3, Collection of Mana is a bundle of all the Mana series of games, many of which never saw the light of day outside of Japan. And they’re out now.

Fire Emblem: Three Houses saw a release of a beautiful story trailer, seeing the focus of the game be an Officer’s Academy made up of three houses. It implies that not only will you be fighting the series’ trademark battles, you’ll be juggling school-based rivalries on top. Coming July 26, 2019

A pair of Resident Evils for your delectation, coming to Switch in Autumn 2019.

Travis Touchdown is back, the last hero there is. Well, not always a hero anyway. Sometimes he’s a wise-cracking assassin. We didn’t see much of the game itself, but the trailer blew us away. No More Heroes 3 is coming out in 2020.

The grandfather of all bullet hell is back with a new Contra. Taking a different direction from the classic Contra games, this is an over-the-shoulder third-person shooter that also mixes it up with top-down sections and some 2D areas. You can also play solo, or multiplayer online or locally. Coming to Switch on the 24th of September, 2019.

A brand new trailer for Daemon x Machina was unveiled, letting us know the release date: 13th of September, 2019.

Who was expecting a remake of the Sega Saturn’s 1995 hit Panzer Dragoon? Not us anyway. But here it is, and it’s looking perfect. Coming Winter 2019.

We finally got to see a little more of Astral Chain during the Nintendo Direct, with the huge boss fights and details of the plot leaking out of this sc-fi action game. Coming 30th of August, 2019.

This top down classic Mafia shooter game will be released in Spring 2020, we don’t have more details other than that, and that it has a cracking soundtrack.

A huge roster of Marvel favourites were on show in the new trailer for Marvel Ultimate Alliance 3: The Black Order, including Miles Morales, Magneto, Spider-Gwen, Ghost Rider, Elektra, Kamala Khan, Hela, Surter, Doctor Octopus, Scarlet Witch, the Guardians of the Galaxy, the Avengers, and of course: MODOK. Unveiled was also the expansion pass which will add playable character from Marvel Knights, X-Men, and the Fantastic Four. The game will be released on the 19th of July, 2019.

From the creators of Crypt of the Necrodancer comes Cadence of Hyrule, allowing you to explore Hyrule in time to the music. Play as Cadence, Link, or Zelda, and kill, dance, and loot. Coming June 13th, 2019.

Mario & Sonic at the Olympic Games

The unlikeliest hit returns with a new Mario & Sonic at the Olympic Games, filled with new events and returning favourites, it’ll be appearing on Switch in November 2019.

A slight day to March 20, 2020 for Animal Crossing: New Horizons, but that’s alright when the game is looking as good as it is. Fishing, gardening, crafting, building, friends, and of course the never ending debt to Tom Nook. It’s Animal Crossing and it’s never looked better.

Spyro burns his way onto the Switch. The remaster which has already been released on other platforms last year will be launching onto the Switch on the 3rd of September 2019.

A huge amount of games flicked by in rapid succession with release dates or timeframes for release. Here’s the list:

Two announcements for Super Smash Bros Ultimate? That’s right, Banjo Kazooie is coming to the game, which indicates a larger thing. Rare is of course owned by Microsoft, so does this imply a thawing of the frosty Nintendo-Microsoft relationship? We’ll have our eyes on this. Banjo Kazooie will be added sometime in  Autumn 2019.

The Legend of Zelda: Breath of the Wild Sequel

The end of the Nintendo Direct was a perfect way to say goodbye to this years’ E3 conferences, by ending with the surprise announcement that Nintendo is making a direct sequel to Breath of the Wild. That’s right, one of the best games of the last decade, getting a sequel. No info on when it’ll be out, but we’re ready for any news.

There we go, a lot of games in a short period of time. What was your favourite announcement, or what are you still waiting to hear about? Let us know in the comments below, and for all your gaming news, views, and E3 updates, head to the Green Man Gaming blog.