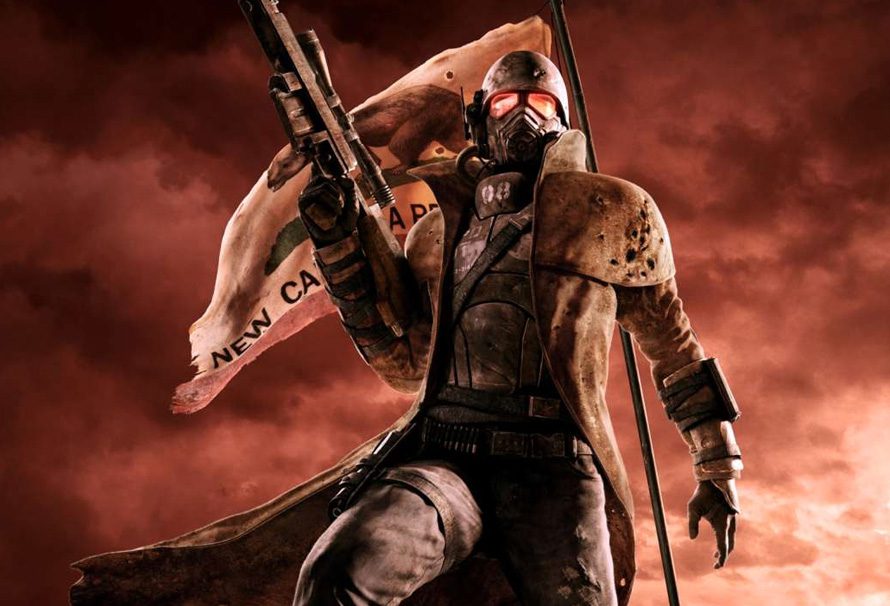 Fallout 76 is coming and it’s definitely confirmed to be a multiplayer-focused survival RPG set in Virginia. It feels likely that the game will take the construction from Fallout 4, combine it with survival mechanics, and expand upon them in a wider multiplayer environment. What hasn’t been made clear, however, is the story side of the game; how will you fit into the world, will there even be a wider story, and what will there be to keep us playing past simply constructing a home?

Instead of theorising blindly about what might be to come, let’s take a look back at the time when modern Fallouts got storytelling right. A time in the desert – in Fallout: New Vegas and hope that even though Fallout 76 is a fundamentally different game it’ll take some cues from the sandiest of Fallouts.

Fallout: New Vegas differs from all the other Fallout games right off the bat by giving you a fairly-low-stakes (at least, compared to the others) reason to be out in the Wasteland looking for trouble. Let’s look at the protagonists:

It gives you enough of a guiding impetus for your quest in the Wasteland without being too ‘save the world’ (Fallout and Fallout 2), without being too weak (Fallout 3), or without making you feel bad for going off investigating in your own direction (Fallout 4). It’s the Goldilocks goal, it’s just right in that you want to find out what the hell happened but you won’t feel like you have to rush to complete it, nor will you feel bad running about helping Ghouls take off into space.

We know that Fallout 76 will take place in a period where you’re being let out of the titular vault for the first time and it’s up to you and other players to repopulate the Wasteland, but past that we don’t know if there’s a personal reason for you being out there, some mystery to solve. Fallout: New Vegas gives us an excellent example of how to give a motivation to a protagonist in an open world game whilst still giving you enough leeway to explore the world.

If the main character in Fallout: New Vegas is the Courier, then the second main character is the Mojave Desert. It’s big and barren and because of that it feels like a real place. If you look at the earlier Fallouts set in California, settlements are sparsely placed and have huge, dangerous distances between them. Fallout 3 and Fallout 4 abandon this somewhat to have something interesting, fun, or heartbreaking every five paces. Which is great if you’re building a videogame.

Fallout: New Vegas, however, is set in a world. A wide open and empty world, but a world that feels like one where people can live.

Imagine living in the world of Fallout 3, you can’t move for super mutants, every time you go to the toilet you fall down into a cave and have to deal with a group of humans who think they’re vampires or a robot that’s wearing a wig. It’s interesting and great to play, but it lets you down on the side of roleplaying.

Fallout: New Vegas has a big empty world with few settlements all spread out, and as a result it’s probably not as interesting to play through if all you want is a dungeon crawl or a bit of shooting. Instead you spend a lot of time travelling between settlements and this gives you this immense feeling of existing in a world. There are sights to see along the way, but they’re fundamentally more mundane, and instead of hurting the game this helps it have a sense of place.

Given that we’ve learned that Fallout 76 will have a huge map, it’s hoped that they’ll take a leaf out of Fallout: New Vegas’ worldbuilding and give Virginia some space to breath in and resist filling it with sights and attractions.

But that doesn’t mean it has to be empty, and what better to fill it with than:

Factions have always been a part of the Fallout series, especially Fallout 4 where juggling faction reputations is key to exploring the game’s plot. In Fallout: New Vegas they take a step further than in any other Fallout game, simply because at a fundamental level, they’re all wrong and they’re all right.

Each faction has a compelling reason to join them and to help them gain control of the Hoover Dam and its surrounding area. Even Caesar’s Legion, a terrifying Romanesque tribal army that thrives on brutality, has a reason behind its madness. Let’s look at the factions who can take over the New Vegas region:

The New California Republic is an old friend if you’ve played the first two Fallouts. Starting out from the village Shady Sands and being wrangled into a huge republic by President Tandi, it’s an organisation that is now finding that idealism doesn’t work in the face of the horrors it’s encountering as it expands Eastwards. It’s also becoming bloated, corrupt, and everything that real nations are. It’s compromised, but does that mean it won’t do right by the Mojave Desert and New Vegas?

Mr. House is the person who hired you, and has been directing events in New Vegas since the bombs fell. Kept alive by arcane arts of technology, he plans to lead New Vegas into the future as a mini-dictatorship. You might inherently rebel against this idea, but he’s been running it for a long time already and it seems to be working out alright, the gangs have an uneasy truce, there’s money pouring into the city and into the pockets of its casinos. Maybe he’s right to take control permanently?

Brutal, sexist, racist, and worse. Caesar’s Legion is founded on the idea that in this new world, the only word anyone will hear will be the one spoken while carrying a big stick. It’s leader, Caesar, found the idea in old history books and has enslaved, destroyed, and killed his way to a huge army that speaks with one voice; his. He’s undoubtedly twisted and evil, but in this harsh Wasteland maybe that’s what’s needed, maybe the olive branch has had its time and now it’s time for a strong fist to lead New Vegas?

The last option is to grant New Vegas independence, it can stand alone in the Mojave Desert as a bastion of freedom and maybe it deserves to. Its population has laboured for years under the iron yoke of Mr. House, and always eyed with envy by the NCR and Caesar’s Legion. Maybe it deserves to stand by itself for once and make its own way in the world. Will that mean a bright future, or one where it is caught between the twin empires who war over it and ground to a pulp between these iron juggernauts?

Each faction is as multifaceted as a fly’s eye, giving the eventual choice that you must make depth and weight. In Fallout 4 factions are again present and they are well written, but some are more obviously right or wrong in their approach. In New Vegas it’s only Caesar’s Legion which is outright evil, and even then there’s a reason for its evil.

In Fallout 76 factions may make a return, as it’d give players something to war over and to ally with other than resources. If they do return, taking a look back at Fallout: New Vegas may be a good way to guide Bethesda’s development teams.

That brings us to the last reason why Fallout: New Vegas should be looked into for inspiration, and that’s:

Every Fallout game is made up of a larger mission that’s interwoven with smaller side missions, quests, and narrative beats. Fallout: New Vegas excels in giving you not only missions that give you something to do outside of the main questline but also missions that let you roleplay your character, inhabit the world, and soak up the small stories that make up the tapestry of the Mojave Desert.

For an example, let’s look at Novac and the quest ‘One for My Baby’.

When you arrive at Novac you hear that it’s protected by two snipers who watch from the nearby dinosaur statue’s mouth at the Dino Dee-Lite Motel. One of them, Boone, is a bitter ex-NCR serviceman whose wife Carla went missing. Using the skills he learned as an NCR Recon sharpshooter he tracked her down only to discover she’d been sold into slavery, discovering her just as she was forced into a Caesar’s Legion auction. Taking his rifle, he sighted her and to spare her the misery of a life enslaved, he ended her life.

Now he has nothing to live for and is a suicidal figure who watches over Novac not for its inhabits, but for a chance to shoot Legionnaires. The Courier convinces Boone to let them look into his missing wife, and proceeds to ask questions all about the small town of Novac. Eventually you can find out that the kindly Motel owner, Jeannie May Crawford, was behind it all as she was jealous over Carla, who she viewed as gutter-trash. Leading her out front of the dinosaur, you signal to Boone that you’ve found the culprit and he again takes sight and ends a life, this time in vengeance.

This quest not only tells you exactly what kind of world you’re in, the brutality of it, the desperation to survive, it also gives you that rare thing in videogames. It lets you be wrong. Much like the best quest in the original Witcher, you can gather information, look into clues, and still come up with the wrong solution. In this case it can lead to someone who sold a woman and her unborn child to slavers going free and the potential death of an innocent.

We don’t as yet know if quests and missions will make their way into Fallout 76, but as all others have used these as tools to frame and direct the player, we expect that they’ll make at least some appearance in the game. Whether or not they’ll be up to the standard of quests like ‘One for My Baby’ we’ll have yet to see.

The world of Fallout is one of moral ambiguity and compromise. From the first game until the latest, the player is tested as to what they believe is right and what they believe they can compromise on. This is never more clear than in Fallout: New Vegas, a game which constantly reminds you with the motivation for the protagonist, the world, the factions you encounter, and small stories that weave together the larger world. Fallout 76 isn’t out yet, but it could do much worse than to look back to Fallout: New Vegas, and remember what makes it so beloved amongst fans of the series.

Facebook Twitter Google+ LinkedIn Pinterest Tumblr
Previous article Modders Remake Lord of The Rings: Battle For Middle Earth In Unreal Engine
Next article 7 Signs You're Ready To Be A DM