If you see the XP tag, you’re getting an exclusive discount. Don’t see any XP tags? Buy games to earn XP. Find out more. 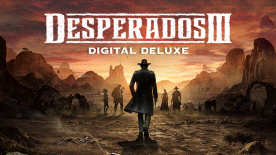 The Digital Deluxe Edition includes the Desperados III season pass with 3 DLCs, each featuring a brand-new mission. These DLCs will be released post-launch in 2020 and tell the story of a new adventure after the events of the main game. The Digital Deluxe Edition also contains a special extended edition of the Original Soundtrack that features 75 high quality tracks for a total of 150 minutes of music.