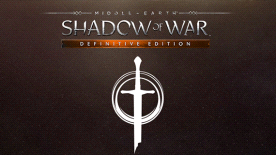 MIDDLE-EARTH: SHADOW OF WAR software © 2018 Warner Bros. Entertainment Inc Developed by Monolith Studios. © 2018 New Line Productions, Inc. All The Lord of the Rings content other than content from the New Line ﬁ lms © 2018 The Saul Zaentz Company d/b/a Middle-earth Enterprises (“SZC”). Middle-earth: Shadow of War, The Lord of the Rings and the names of the characters, items, events and places therein are trademarks of SZC under license to WB Games Inc.