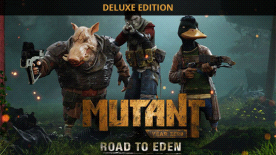 From a team including former designers of HITMAN and PAYDAY comes Mutant Year Zero: Road to Eden, a tactical game that combines the turn-based combat of XCOM with real-time stealth and exploration of a post-human world reclaimed by nature… and Mutants.

Seed of Evil is an expansion to the award-winning tactical adventure game Mutant Year Zero: Road to Eden picking up where the original game ended and offering hours of more gameplay, new locations to visit, and a new leading character!