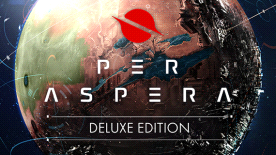 Enjoy your time off-world with the Deluxe Edition of Per Aspera that contains the Planet-builder game from Tlön Industries and Raw Fury, an Audiobook featuring an all-star cast, a Digital Artbook, and Per Aspera’s Original Soundtrack with music from IGF-winner Tomas Batista.

OST
Be transported to the red planet of Mars with the original accompaniment from Tlön Industries’ planet-builder, Per Aspera. IGF-winner, Tomas Batista, has scored the perfect Martian soundtrack to take you away to the unforgiving surface of the Red Planet.

Audiobook
Take your Per Aspera experience offline! Listen to the commanding performance of an all-star cast recreate the climactic story of humanity's attempt to Terraform Mars. All the narrative action you want, none of the work to get it!

Artbook
Through the use of NASA technologies, Tlön Industries has allowed players to step onto the surface of Mars from the comfort of home. Now you can get even closer to the planet’s surface with a stunning, digital artbook that features gorgeous art from Per Aspera.