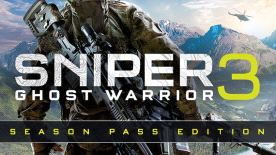 Sniper: Ghost Warrior 3 © 2016 CI Games S.A., all rights reserved. Published and developed by CI Games S.A. Sniper: Ghost Warrior is a trademark of CI Games S.A. Portions of this software are included under license © 2016 Crytek GmbH. This software product includes Autodesk® Scaleform® software, © 2016 Autodesk, Inc. All rights reserved. ©2016 Valve Corporation. Steamworks and the Steamworks logo are trademarks and/or registered trademarks of Valve Corporation in the U.S. and/or other countries. “PlayStation” and the “PS” Family logo are registered trademarks and “PS4” and the PlayStation Network logo are trademarks of Sony Computer Entertainment Inc. Microsoft, and the Xbox logos are trademarks of the Microsoft group of companies and are used under license from Microsoft.