Marvel vs. Capcom is back, pitting two distinct universes against each other in stylised, frenetic, 2D tag-matches. If you have ever wondered if Capcom’s Dante could batter Marvel’s Iron Man, this is the place to put it to the test. We have all asked ourselves if Street Fighter’s Chun-Li could crush The Hulk with her legs, after all. Right? Right?

Anyway, whatever you have been considering, there is a good chance Marvel vs. Capcom: Infinite will have the answer for you. Well, the answer will always be a flurry of fists and feet accompanied by flashes of brilliant colour, but you will be too excited to care.

If you are new to the series, Marvel vs. Capcom is a 2D fighter with a large roster of characters. Each fight consists of three vs. three, with each player able to tag another character in at strategic moments throughout the match. Health low? Tag. Want to pull off a super, character switching combo? Tag.

For now, though, let’s talk the basics. With so many characters to choose from, which ones are the easiest to get to grips with? Here are our picks.

Everyone has played Street Fighter, right? That makes Ryu an easy pick for beginners, since most gamers have at least his fireball burned right into their frontal lobe. Stick with this old faithful and you will be shoryuken-ing people in the face in no time. He has been powered up a bit from his Street Fighter incarnation - to keep him competitive against self-healing mutants and the like - but he still feels like a comfy pair of shoes. He is limited compared to some of the more exciting choices, however.

The same logic applies to Chun-Li. Smash those buttons enough and you will soon be doing infinite leg kicks right to the noggin’. This Street Fighter favourite is even a top pick for professionals, since she is one of the quickest fighters on the board. When on the receiving end of a Chun-Li beatdown, her combos feel like they will never end.

Air dashes make fighting in Marvel vs. Capcom much more complex, so characters without an air dash are always much easier to learn. Ol’ Cap here is a great starter fighter because he is strong, reliable, and he likes to keep grounded. Many agree that Captain America is one of the best characters to learn the basics with. He’s like a Ryu but with more tricks and better maneuverability. His shield allows him to do some flashy projectile attacks, while his dash lets him close ground or escape quickly. His regular movement is slow, but he makes up for it with that dash and a sneaky backflip.

Another all-rounder, Captain Marvel is easy to get to grips with because she doesn’t need to rely on long combo chains. When she hits, she hits hard. Of course, you can work your way up to figuring out her devastating combos once you begin to learn the ropes. It won’t be long before you are juggling enemies in mid-air. She’s a little tougher to master than the others listed here, but you need to take flight at some point.

He can’t fly, he has a gun, and you can trigger some of his special punches by mashing the same button, making him ideal for players who are starting out. He also has a flamethrower, which is an amazing tool for keeping enemies in the air if you manage to juggle.

Dante’s sword gives him a reach advantage over many characters, giving him a natural edge. This makes him an ideal pick for beginners, though, just like in the Devil May Cry games, there’s also plenty of depth there once you decide to try and master him. 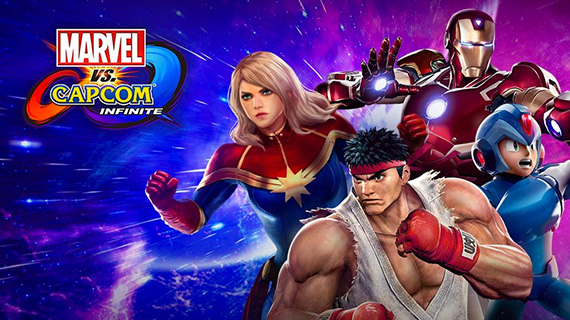