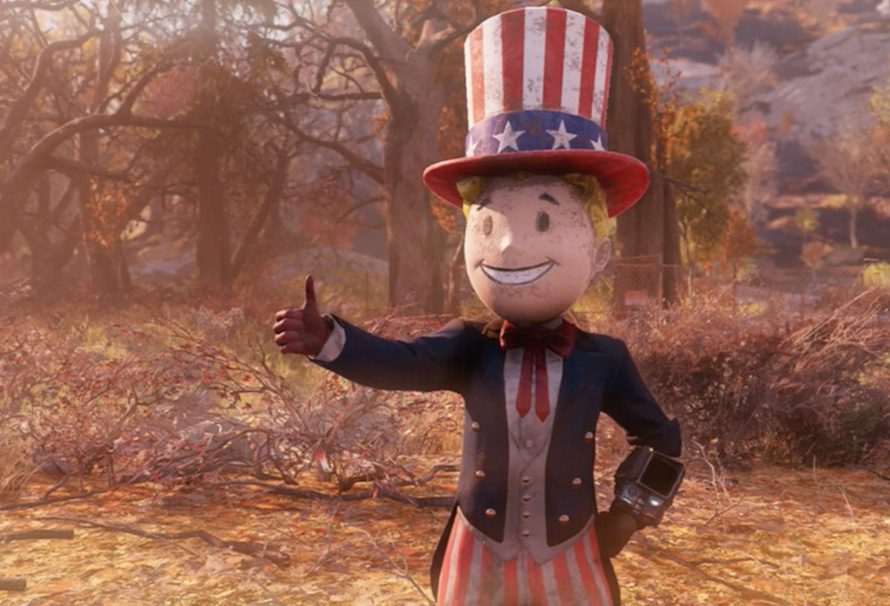 Fallout 76 emerges out of the vault into the blazing sunlight of a full release on November the 14th, and we’re incredibly excited to get our hands on it and explore.

The game itself is set in West Virginia, a so-far untapped region for the Fallout series and one that promises to be a bit more lush and untouched than any seen in other games. Gone are the deserts of the West coast and the ruins of the East, instead the forests await.

We know that Bethesda have been to West Virginia and are including much of what makes the region so special in Fallout 76, but will they capture it all? Here’s what we’re hoping to see.

This one’s a bit of a cheat, because we already know that not only will Mothman appear in the game, but the Mothman statue is in too – glorious butt intact. The game lets you take a wander on up to the hallowed site and peer at that glorious ass. We’re so glad that the most bootylicious statue on Earth is present in Fallout 76.

One of the most famous walks on the planet is the Appalachian Trail, and we’re hoping to be able to walk part of it in Fallout 76. Many hikers take to it each year, so we’d not be surprised to find some remains smouldering still on its lengthy trail.

Another cryptid said to walk West Virginia’s woods, Bigfoot is probably the most famous cryptid on the planet so we’re hoping to spot it scampering between trees. Will it be friendly, aggressive, or worse: sexy? We don’t know yet, but Bethesda do.

In all of West Virginia there are few places as mysterious as Kepler, home to the Cryptonomica, Amnesty Lodge, and the world famous and sadly defunct H2Whoa: That Was Fun!, Kepler would be an amazing addition to the game. We just have to hope that it’s not a full moon.

The Evil Dog of West Virginia

You may not have heard of the Evil Dog of West Virginia but many West Virginians are familiar with its terrifying howl. Said to be a mix between a chihuahua and the devil himself, the Evil Dog is said to roam the forests always searching for prey. If you hear it’s bark the only thing you can do is wait, because the scythe of the reaper will be swinging at your neck before long. Hopefully this Evil Dog will make a terrifying addition to Fallout 76.

The Haunted Pizza Hut of Charleston

In West Virginia’s capital, Charleston, there’s a deeply mysterious Pizza Hut. Long said to be haunted, it was reopened in 1986 after a long period closed. What happened that night we do not know, except that the screams could be heard all over Charleston. Will it appear in Fallout 76, or is this simply too spooky for gamers?

Chuck Yeager was the first person to break the sound barrier, but did you know he’s a West Virginian? We all know how he broke the sound barrier and we  know of his illustrious career afterwards, but no-one knows what happened to his sonic boom. Did it dissipate into the atmosphere as the government would have us believe, or is it still out there roaming, searching for the person who gave it life? We don’t know, but maybe Fallout 76 can answer this.

In 2012 a group of teenagers decided to cash in on the hiking crazy taking over America and set up their own version of the Appalachian Trail. Unfortunately it didn’t take long for problems to set in, and the trail was quickly abandoned. Now whispers abound of the trail, some say it has returned bigger and yet, worse, than before. Now named the Appaling-achian Trail, those who walk it are said to be cursed. Will it appear in Fallout 76? Find out on the 14th.

It is said that if one turns thrice widdershins around the Mothman statue and hum the national anthem backwards that a portal to Worst Virginia will open. There everything is the same, except backwards and the colours don’t work. It’s a terrifying place to visit and few have returned to tell of its twisted glories. If Worst Virginia is included in Fallout 76 it’ll show the dedication of the Bethesda team, as this would be an entirely other map to explore.

Fallout 76 will be officially released on the 14th of November.