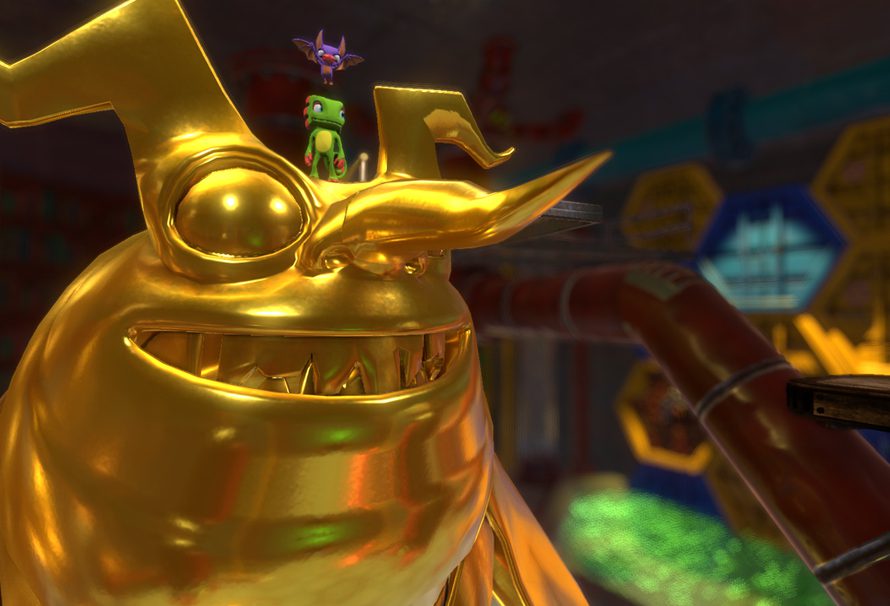 The reviews for Yooka-Laylee went out on Tuesday and they have been a mixed bag! It seems that there’s a love hate relationship going on with Yooka-Laylee and the games industry at the moment. We of course have been playing Yooka-Laylee in the background and have simply fallen in love with the game! Everyone in the office has also lost count at how many times I have stated that I backed the game on Kickstarter (to the point where people are considering getting me a shock collar).

So without further ado here are the 5 reasons we love Yooka-Laylee so far!

It’s a Love Letter To The Old School 3D Platformer

When most people talk about Yooka-Laylee one of the things that is bound to come up is that the game harks back to old school 3D platformers If like me you grew up in the N64/PS1 era surrounded by games such as Banjo-Kazooie, Mario 64, and Spyro The Dragon then this game is going to appeal. A lot of criticism surrounding Yooka-Laylee stems from the fact it is stuck in that era. Yooka-Laylee never advertised itself as the next massive evolution gaming, it always stated that it was a revival of the original 3D platformer, and that is exactly what it is.

How can you not love the two main characters. Both Yooka and Laylee have that cute cartoon charm which is very hard not to fall in love with. Laylee the bat turns the sass up to eleven and breaks the 4th wall every now and again with some jokes, whilst Yooka is the more level headed character. It’s the perfect yin-yang situation andthe characters play off of each other perfectly. Yooka and Laylee both echo Banjo and Kazooie quite a lot but that’s not necessarily a bad thing. It’s not just the dynamic duo that steal the show either, all the characters in the game bring some great charm and their own personality to the game.

The Variety Of Gameplay

On the surface, Yooka-Laylee looks like one of those 3D platformers where you complete jump puzzle after jump puzzle in order to reach the main goal and win. True, there is a lot of jumping and I have come to realise that gravity is my worst enemy in this game. However, the game also throws in some different gameplay elements to shake things up a bit, such as mine carting, shooting and even the ability to morph into different creatures and objects in order to complete puzzles. Playtonic have really thought about how they can shake things up a bit whilst staying true to original 3D platformers.

Much like any 3D platformers from a few generations back, Yooka-Laylee is rammed full of collectables. The developers then thought it would be a good idea to throw in some more collectables and then top it off with even more collectables. Players are tasked with nabbing quills, collecting pagies and hunting ghost writers. So there is plenty of collectibles to keep any completionist busy.

One of the things we weren’t expecting from Yooka-Laylee (besides turning into a snow plough at one point during the game) is that each world is expandable! If players collect enough pagies, they can expand the worlds in order to grab more collectables and unlock more things to do. It’s a pretty simple mechanic but it works well and gives players a lot more to explore. I did feel quite motivated to grab those difficult pagies in order to uncover what other delights each world had.

That is the 5 things we love most about Yooka-Laylee, feel free to let us know what you love about the game when it hits next week!