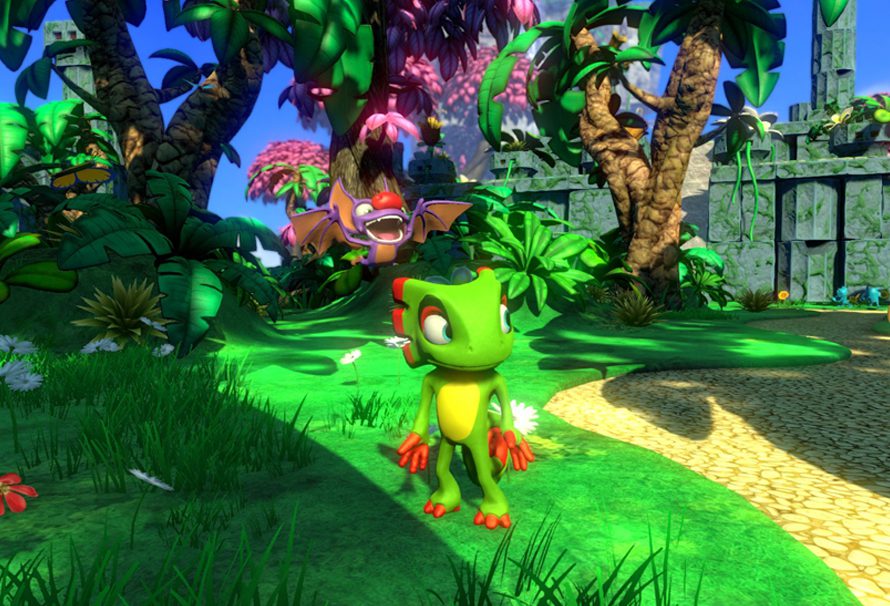 When Yooka-Laylee first hit Kickstarter back in 2015, the game’s developers, Playtonic Games dubbed the game as a ‘3D Platformer Rare-vival’. Having played a few hours into the game now, we can safely say that Yooka-Laylee is all that Playtonic promised and a hell of a lot more!

If you are reading this, there is maybe a 60% chance you have spent quite some time reading up about Yooka-Laylee, you may have even checked out the Yooka-Laylee hub to get all the info you need. So we won’t go into details about what the game is and who Yooka and Laylee are. Instead we plan to just go straight into how the game plays and feels and what the multiplayer offers as well.

As soon as you are thrown into the vibrant and enchanting world of Yooka-Laylee you are immediately struck by how amazing it looks. The vivid colours and cartoony aesthetic really works well. As stated in our EGX Preview it is truly an old-school 3D platformer and that has been given a next-gen lick of paint, and the combination works perfectly. Even if Playtonic love to stick googly eyes on pretty much everything and anything in the Yooka-Laylee world.

It’s nice to see that the game has a decent amount of character progression. Most games nowadays have a lot of the hero’s moves unlocked from the get go. Yooka-Laylee takes it back to basics and encourages players to purchase moves. Moves are purchased with quills which are scattered among the many worlds that Yooka and Laylee will explore, just have a chat with the wheeler-dealer snake, Trowzer, and he’ll give you some new moves for the right price. Most if not all these moves are needed to progress in the worlds in order to get those valuable pagies. 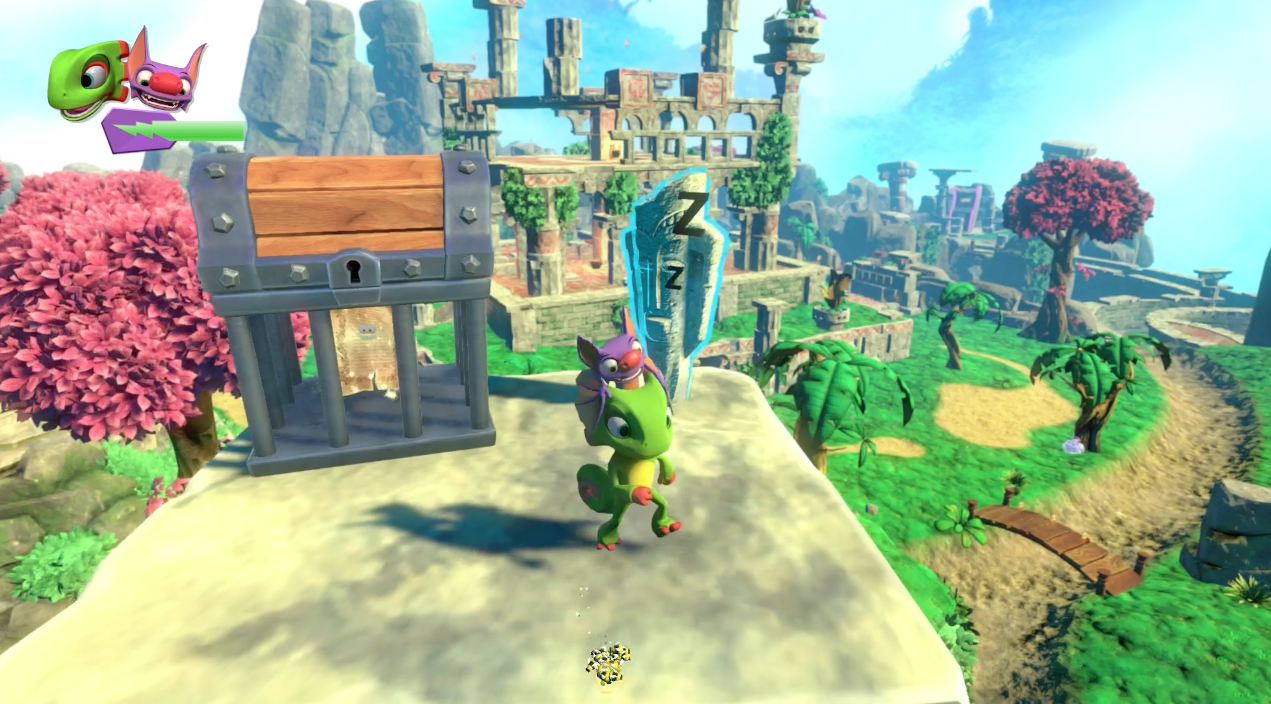 What’s also pretty cool is each world is expandable, you are able to make the worlds bigger in order to get more collectables and unlock more mini storylines. It’s a really nice addition that has not been explored in a 3D platformer before, and gives the player even more incentive to get all of those collectables and make the most of their gameplay. We’d be lying if we said that this game is a simple 10 hour linear affair, players can easily lose days, even weeks looking for every single collectable. The true beauty of this game however is that is appeals to both completionists and the more casual gamer, as you are still able to progress through the story even though you haven’t picked up every single collectable on the map.

Speaking of accessibility, Yooka-Laylee comes with a toned down co-op mode that is perfect for young families, especially for parents who want to get their kids into gaming. Player 2 controls the B team whilst Player 1 controls the dynamic Chameleon and Bat duo. As the name suggests, the B team are a mini swarm of Bees. These Bees are able to help Yooka and Laylee on their adventure by holding platforms and gathering collectables. It’s really a great little addition to the game which will appeal so much to families and young gamers alike.

Whilst we are on the subject of multiplayer, there are eight endearing multiplayer mini games that up to four players can hop on, entirely separate to the main campaign and story. With Kickstarter backers raising over 2 million for the 3D platformer, it’s easy to see why Yooka-Laylee has been bagged as the game which will revive the 3D platformer genre. 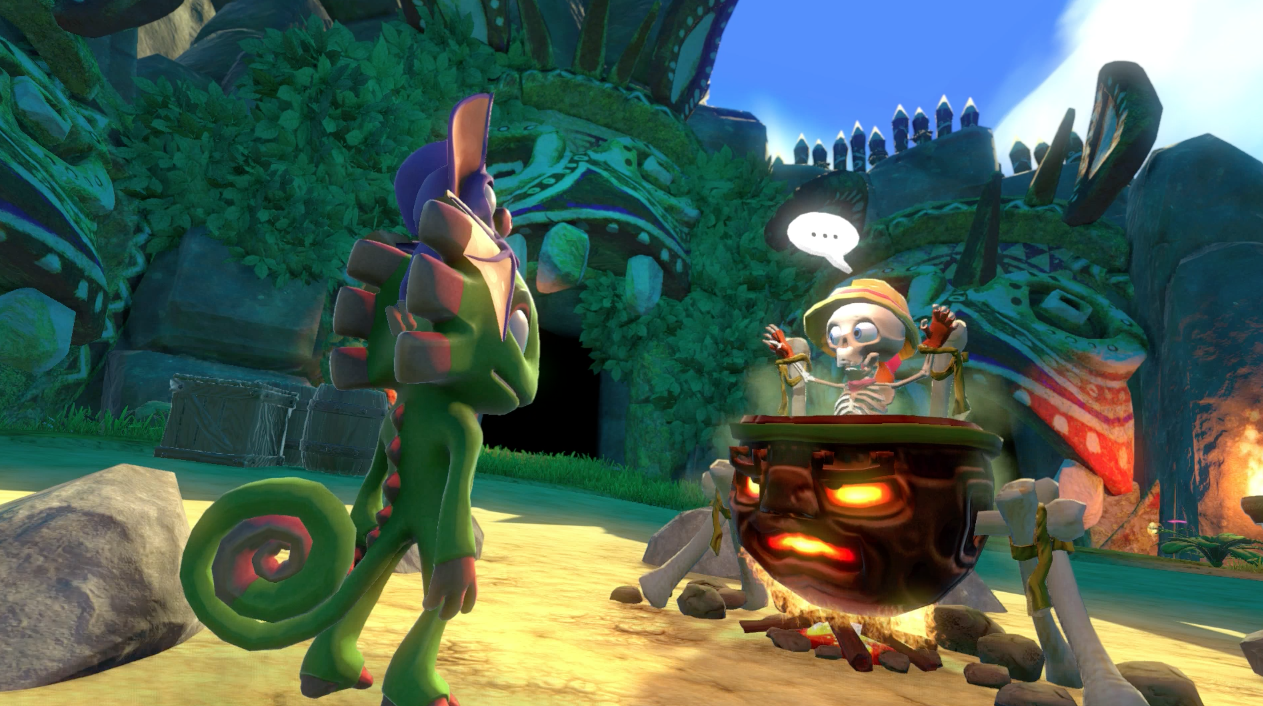 With all our favourite past platformers, the adorable characters, a not-so-menacing villain and quirky collectables are part of the package, but the local co-op is equally as important. Although Yooka-Laylee does heavily focus on the campaign, the multiplayer mini games are a welcome addition and ideal for family, friends and in our case, office battles.

For those that grew up in the era of the 3D platformers, when the Nintendo was at peak popularity and Sunday afternoons were spent crowded around a small TV, they seemed to fade into a hazy memory of Mario Kart storm outs, outbursts of giggles and the understanding that ‘I am the best at this game and my last score is no reflection on that’. Yeah, we relate.

So, it’s great to see these local co-op games make a comeback, complete with multi-coloured Yookas for each player and a series of quick (around 10 minutes) games, that are easy to fire up. Included in the eight mini-games are Glaciators, Kartos Karting, Blag the Flag, Gun-Let Run, Hurdle Hijinx and Jobstacle course. Learn all about the mini games on the Yooka-Laylee hub.

That’s it for our first impression of Yooka Laylee, for more info on the game jump straight to our hub here!

5 Reasons Why We Love Yooka-Laylee