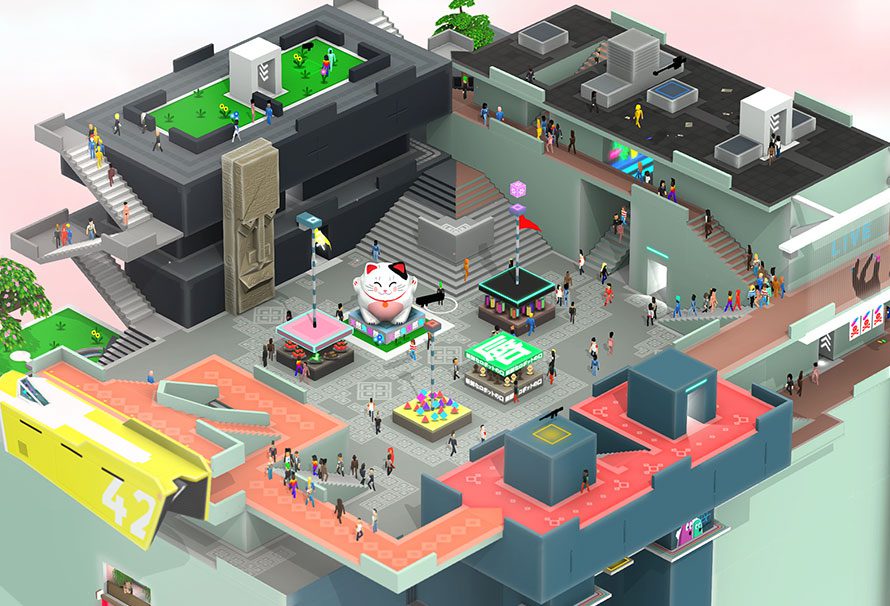 The first thing I noticed when I sat down to play a bit of Tokyo 42 was how beautiful it was.

That was the second thing and third thing I noticed too.

See I’d been labouring under a misapprehension. I’d seen trailers before and I’d assumed that Tokyo 42 was like Monument Valley, maybe not in how it played, but in how it made small worlds out of cubes. It may have a lot of levels, but each one would be contained.

It turns out Tokyo 42 isn’t a small world made of levels at all; it’s massive, it’s a whole city. You can zoom right out until the bustling metropolis looks like an ant farm, and it’s then that the true scope and scale of this game becomes apparent.

I’d expected the game to be pretty, but in the way that a snow globe is pretty. I didn’t expect it to combine both beauty and scope in such a way that it was almost breathtaking. It’s even more amazing due to the fact that this is the creation of the two brothers who make up Smac games, the game’s designers.

In the Bethesda Fallout games, there’s always a moment where you emerge from the vault and see the vastness and strange beauty of the wasteland. Tokyo 42 has a similar moment where you emerge from your tiny little Japanese-hotel-esque bedroom and there it is, the whole city is right in front of you. And I don’t know if I said this before, but bloody hell it’s beautiful.

As a hitman it’s your job to use guns on people for money. Simple yeah? At the start it really is simple, you run about, identify your target, spin the camera about to get a good angle on them, and bam you take the shot.

Over the course of what I played I advanced through a few weapons, starting with pistols and eventually getting a sniper rifle, an SMG, and grenades. Combat seemed fairly simple feeling a bit like a twin stick shooter (but I was on mouse and keyboard), but it definitely ramped up in the time I had with the game. I was ambushed by a mob of folks who were quite upset that I’d just shot one of their friends, the amount of people coming at me armed to the teeth meant that it turned almost into a bullet hell shooter for a few seconds. Until I shot them all, that is.

I also found out that the game has a disguise system. You’re able to shift what you look like into another person’s outfit, almost Prototype-like, to evade pursuit or sneak closer to your prey. Of course I messed this up, having to rely on jumps and the city geometry to escape from a crowd of people I’d again quite annoyed. Chatting to Mode 7 head honcho Paul Kilduff-Taylor  he let us know that this was just one of the tools available to you, that you could get around the guards and security without using the disguise system if you wanted. It means that Tokyo 42 has something of the Hitman to it; you can explore and create your own way to take down targets, depending on the mission you’re undertaking.

If you like collectables, then they’re here too! I spied a distant cat face floating on a shelf, and with no small degree of hopping about, I managed to reach it. The whole city is made up of nooks and crannies for you to explore, find things in, or just enjoy existing in. The jumping in T0kyo 42 is again something that took me by surprise by how much I enjoyed it. Smac games have been smart and put a little line below you so you can tell exactly what you’re above and where your character is at all times, so no more Mirror’s Edge style plummeting into the abyss. Unless you want to do that!

Ending the demo, Paul took us on a whistle-stop tour of the city using the in-game teleport network, and again our mouths were agog at the size and variety of the city that was on show here. We got to see areas where stealth missions would take place, areas where you could do some parkour, areas which zoomed in on you as you strolled through a densely populated market zone.

Overall Tokyo 42 is shaping up to be a brilliant game, combining a wonderful and rich city with combat and exploration mechanics that seem simple but have that ability to let you scratch deeper and master them.

But it’s the city that I’ll be dreaming about when I think of my time in Tokyo 42.

Did I say that it was beautiful?