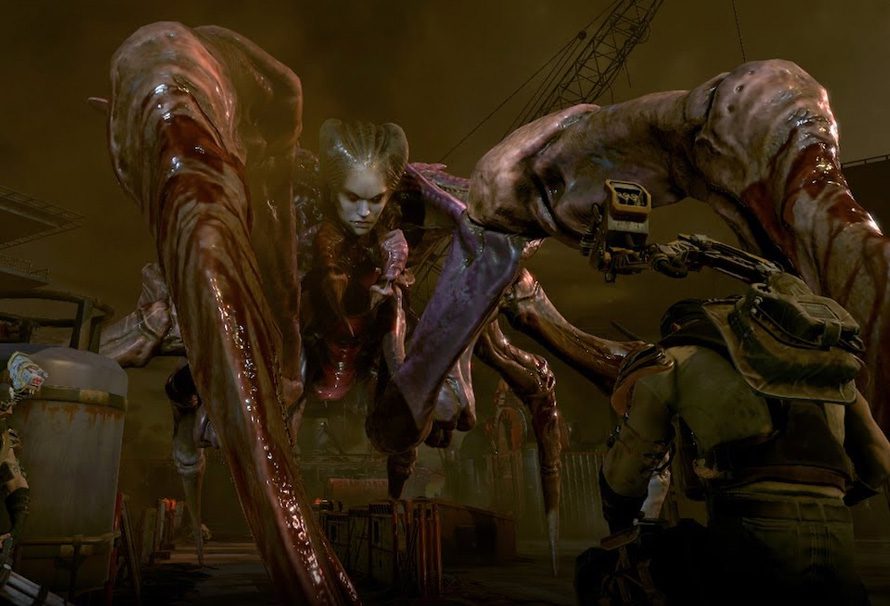 Phoenix Point is the next game from Julian Gollop. Julian Gollop is a name that you might not have heard, especially if you’re younger, but his legacy is huge in the PC Gaming world. He is behind great games such as Chaos, Laser Squad, but most importantly: XCOM.

Hopefully you’ve heard of XCOM, or rather, X-Com as it originally was when Julian Gollop was designing and developing these landmark strategy games. Well he’s back with Phoenix Point and it looks like it’ll mix together the absolute best of old-school X-Com and new-school XCOM.

We got a chance to chat to Julian Gollop at Rezzed, held in London earlier this week. We sent X-Com Veteran Alex Mchugh who is old as time and has been playing X-Coms since they came out, and XCOM Youngster Oliver Paul who has only played the reboots, but absolutely loves them.

Here’s what these two different people had to say about it:

What stuck out to me was that it feels like a return to some of the best ideas of the original X-Com series. The reboots are marvellous games, but for me they stripped out some of the complexity of the older titles, and I’m incredibly pleased to see Phoenix Point walk the tightrope between accessibility and depth.

Factions, similar to how they worked in X-Com Apocalypse are back, and you’ll be balancing these factions against each other, endorsing some and alienating others as you work to save the world from an alien threat, and from the threat of each other.

Action points are back too, meaning that your actions and movements throughout the game are more fluid and the possibility space that your squad operates in is much larger. You’re not going to be stuck doing two moves a turn, instead you can hunker down and fire off a few shots, or you can sprint like the wind, or mix it up however you choose. As long as you have the action points for it, you can do it.

With the theme of the aliens being a riff on aquatic mergings between alien and submarine life, at least at the start of the campaign, it feels in many ways an homage to X-Com Terror from the Deep, the absolute bastard-hard sequel to the original Enemy Unknown. Seeing these creatures, especially the crab ones, took me right back to the days of fleeing from awful Lobster Men back in the 90s. Except now they’ve been updated, they’re smarter, they’re tougher, and they have different evolutionary variations which means you might have to adapt your tactics suddenly at the start of a new battle.

Anyway, as an old, old man, it brings me great joy to see some of the ideas from great games I grew up with refined and used again today. I’m incredibly excited for Phoenix Point, plug it into my veins already.

So I’ve always heard that the new XCOM games were much more linear than the older ones. You get one base, normally just one squad that can go on one mission, on one planet, against one alien race. I’d heard stories about multiple squads doing things at different times, X-com bases stretching across the globe, and stuff going on IN SPAAACE and underwater too. Now with Pheonix Point, I feel like I’m finally going to get what every younger gamer wants: the chance to play an old gem, but with a usable UI and no CD-ROMs.

Something that Julian Gollop said got my attention in a big way. He said that the game was comparable to Stellaris. Stellaris?! The 4x game?! He talked about you just being one faction out of a handful, fighting over resources and against the alien menace encroaching across the land in a oppressive fog. Take the campaign map of a 4X game and the battles of XCOM and I’m sold. I like the idea that enemy factions change depending on what you do, so no two play-throughs are the same. Even with the XCOM expansions, I felt like it was just playing the campaign, and the same main missions, again. After day 3 everyone knows the best squad combo, the best build order for your base and the exploitable tactics. Opening up the game to more variables means not everyone plays the same game. And embarking on another play-through becomes like starting another game of Civ – something you do all the damn time.

On the battle side of things, you could almost mistake it for new XCOM, it’s incredibly similar. I don’t think myself or any other XCOM fans will have trouble adjusting to Phoenix Point, and there’s plenty of new mechanics to explore that don’t feel very new-XCOM at all. It feels more nitty-gritty because you can free aim, you can target specific parts of enemies and there are mid-game objectives like securing watch towers to help clear out a base. It feels like a military game rather than a team of sort-of super heroes like in XCOM. Recurring bosses will come back, genetically altered to be stronger based on how you took it down last time. Even the alien race will adapt to your favourite strategies. A team of 3 snipers may not stay effective for ever. These big boss units will actually feel like they deserve the name, having lots of health for different body parts, unlike in XCOM where a few rockets can take out anything.

Overall I’m looking forward to trying out Phoenix Point, probably more-so than an XCOM 3. It looks and feels different and gives you more tools to change the outcome of the game. Not to mention that because it’s more 4X, there are other ways to win, it deals with the issue of XCOMs negative feedback loop. At least, here’s hoping.