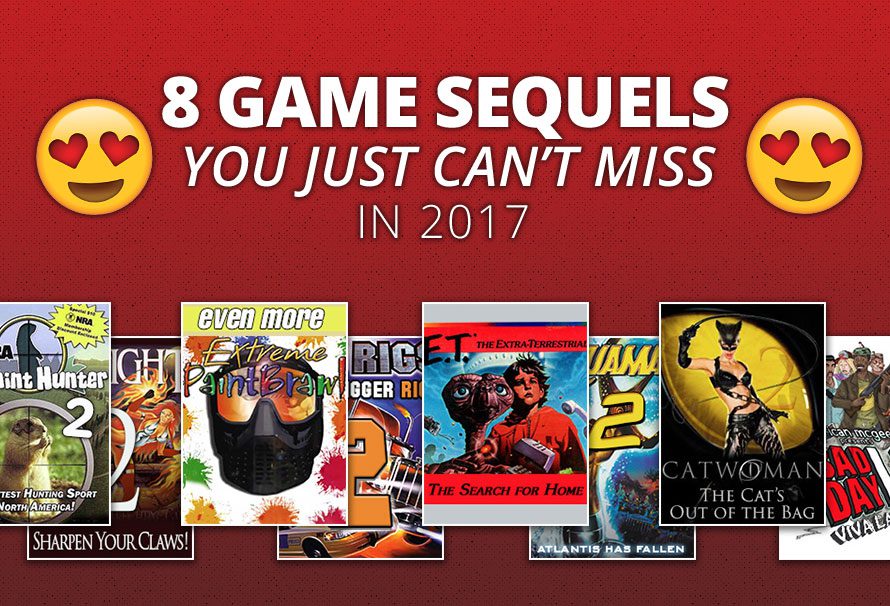 There are some fantastic sequels coming out in 2017 that we simply can’t wait to get our hands on. So we have come up with a list of 8 (because lists of 5 or 10 have been way overdone) of the best sequels coming out this year that everyone should have on their radar!

What we truly loved about the first Big Rigs game was how astonishingly unfinished it felt, and we here at Green Man Gaming are hoping that Even Bigger Rigs will bring much of the same game breaking action! The last game had top notch AI, that not only didn’t move off the starting line, it also gave you absolutely no competition at all, making each race in Big Rigs an easy win. We also hope that the sequel will bring the same lacklustre terrain physics as its predecessor, I mean who doesn’t love driving straight up a vertical cliff without any problems? You’re winner indeed when you pick up this title!

E.T: The Search For Home

Remember back in the 80’s when E.T the Extra-Terrestrial for the Atari 2600 almost destroyed the video games industry? Well we have some great news for you as the sequel to the infamous game has been announced and we can’t wait for the destruction of the games industry to unfold once again! What made the original E.T on the Atari a cut above the rest was the sheer repetitive game play, it’s as if the game designers spent hours painstakingly copying and pasting levels and just adding more pits for players to fall down. We hope that the sequel adds even more pitfall traps and carries on its highly regarded monotonous and dull gameplay. We can’t wait to get our hands on E.T: The Search For Home just to experience burying it in a landfill in New Mexico first hand!

As we all know Aquaman is the best member of the Justice League and most beloved fish-based superhero we can think of (other than Namor the Submariner. And Aqualad. And…). We spent hours playing Aquaman: Battle for Atlantis just to experience the sheer repetitiveness of its combat and erratic camera movement. Rumour has it that Atlantis Has Fallen will be implementing new game modes just to fit in more with the Aquaman aesthetic. Players will be able to have in depth conversations with fish, jump into a dance mini game down at the Atlantis nightclub and even try and awkwardly fit in at Justice League social meet ups. Oh and Atlantis is under attack again so that will more than likely play into the story at some point as well.

The classic 1996 beat ’em up Catfight is finally getting a sequel, because we all know that the world needs another ‘Ultimate Female Fighting Game‘. Described by fans as the sexist cheap knock off of Mortal Kombat the sequel promises to bring more cat fights, more highly cringe worthy voice overs and a HUD that features even more primary colours! Catfight 2 also promises to bring back its highly praised slow response times, making the AI virtually impossible to beat! Rumours have also been surfacing that there will be a bigger roster of scantily clad women for players to choose from. So if you are one of these naysayers who thought the Catfight game didn’t have enough pallet swapped characters, then Catfight 2 is the upgrade for you!

Bad Day In LA 2 takes the very idea of the worst day in Los Angeles history and transports it to the city of sin. Much like its predecessor Viva Las Vegas will be chock full of juvenile and offensive humour that everyone was raving about in the first game. You will once again play as Anthony Williams, and this time he will have to try and save Vegas from an array of natural and unnatural disasters. Using his razor sharp toilet humour and damn right offensive attitude, Williams will stop at nothing to complete his goal. He will come up against enemies such as bad camera angles, stupidly overpowered AI and even bosses that require no tactics whatsoever. You thought you had a Bad day in LA? Your day is going to get even worse in Vegas!

If there’s one thing we love more than Extreme Paintbrawl it’s Even More Extreme Paintbrawl. If like us you love your shooting games to have absolutely no AI whatsoever, then the fifth instalment to the Extreme Paintbrawl saga is just for you! Even More Extreme Paintbrawl promises to follow exactly the same formula as the previous 4 iterations. Players will be thrown into a paint ball arena to duke it out, once you are hit by a single paintball the game ends. Back by popular demand, the highly immersive practice mode from the first game will be making a comeback. This mode will throw brawlers into an empty arena with absolutely no AI or player controlled characters, giving you the perfect opportunity to practise your aiming on walls, boxes and ramps! We can’t wait to bathe in the paint of our enemies!

Catwoman 2: The Cat’s Out Of The Bag

The film Catwoman starring Halle Berry has been dubbed the best Catwoman movie to date. The game raised the bar even higher as Halle Berry didn’t even provide the voice for Catwoman! Catwoman 2: The Cat’s Out Of The Bag will bring back its overly simplistic combat and tedious platforming. What’s more, Cat’s Out of The Bag will also feature higher resolution graphics in the hope to distract players from broken game mechanics!

So there you have it, our most anticipated sequels for 2017! Let us know what you are the most excited about in the comments below!