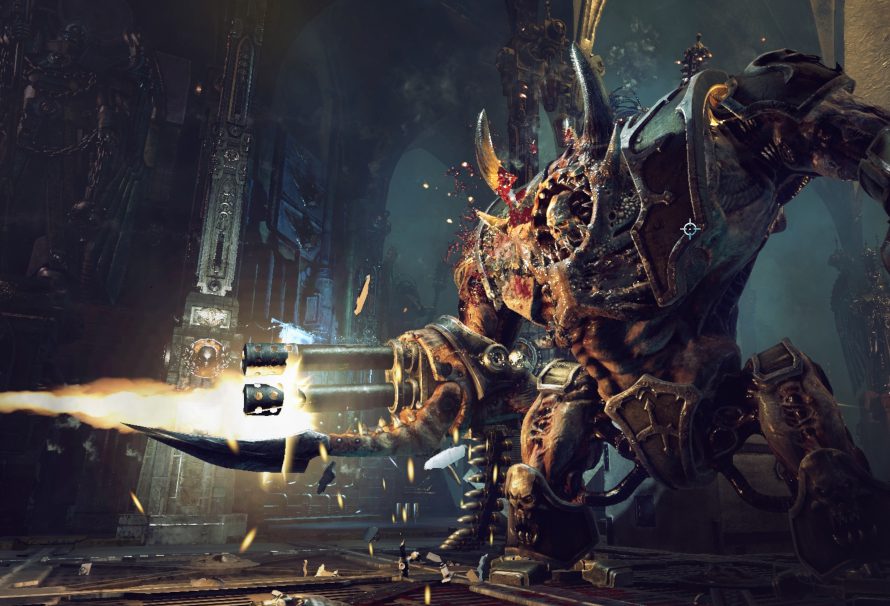 Collecting, painting and playing Warhammer almost feels like a bit of a right of passage. It seems that at one stage or another most people have got involved in the hobby. For those that have it’s therefore only natural to want to also check out some of the best Warhammer 40k pc games too.

There is such a rich world of Warhammer 40k lore and for over 30 years we’ve been seeing it evolve from the tabletops and books to our computer screens. When it comes to Warhammer 40k games, we’re almost spoilt for choice. Not only are there tonnes of different games to play, but they also span numerous genres. You’re bound to find something you’d enjoy if you’re looking for a good 40k time.

Initially released back in 2016 Space Hulk: Deathwing sees you donning massive – and quite frankly a little over the top, the armour of the Dark Angels feared 1st company of Terminators, the Deathwing. Engage in chaotic first-person battles in single-player and co-op against the terrifying horde Genestealers. The dark and oppressive levels created an atmosphere of tension and fear as you moved through narrow corridors with deadly choke points into vast open areas with distinct Gothic stylings that culminated in large set pieces.

Sometimes you just want to feel like a badass with ultimate power. The Terminator certainly feels a little overpowered and possibly like they’re compensating for something, but damn if it isn’t fun feeling like an unstoppable force as you slice and dice your way through the many limbs of the Genestealers.

The game provided intense firefights with melee combat and deadly power weapons and allowed for large amounts of customisation and replayability. It was a great way to experience being a Terminator first hand.

The Space Marine, is there a more quintessential embodiment of 40k? They’re the poster image of the hobby. When starting out, you nearly always start with painting some of these guys. So what better way to experience the digital world of 40k with one the best Warhammer 40k games around.

Take on the role of Ultramarine, Captain Titus in this 3rd person shooter against a horde of Orcs over a million strong. If you’re after an action romp through an impossible number of enemies for one person to realistically take on then Warhammer 40,000: Space Marine is the one for you. It’s like the Fast & Furious of space-faring shooters, it doesn’t try to be something it’s not. The game knows that sometimes you just want to shoot lots of Orcs and have a fun time doing it. Chuck in some interesting weapons to choose from, including the iconic chain sword and you’re on for a winner.

It may have been released to fairly mediocre critic reviews, but with 92% overall positive reviews on steam, I think it’s safe to say people like it!

Not only is Warhammer 40,000: Dawn of War a fantastic entry in the world of Warhammer 40k pc games, it’s also a fantastic RTS. Build up, take command and lead huge armies into battle as you choose from either the Space Marines, Orcs, Chaos and Eldar in this epic strategy game set in the 41st Millenium. Let’s not forget that since it’s launch there has also been a lot of additional expansions added to the game – including the extremely well-received Dark Crusade which introduced the Necrons. There are a wealth of races and armies to play, new tech trees,  and new storylines to follow when considering all the additional content now available. It means you have literally hundreds of hours of gameplay for less than most new games.

If you’re a fan of RTS games and haven’t tried it out yet, I’m not really sure what you’re waiting for. It’s cheap as chips to buy and has an excellent story campaign to get stuck in to.

This might not appear on many people’s best Warhammer 40k games list but it’s still a really solid entry to the 40k franchise and gives players a chance to get stuck into the 4X genre.

Lead one of four factions in this turn-based strategy game. Where each faction has their own play style and technology trees to discover.

Worlds are randomly generated and filled with rich resources, dangerous wildlife, and powerful artifacts for you to control. Construct cities and fortifications as you battle for territory and resources across Gladius Prime.

Test yourself against challenging AI or play cooperatively and competitively with friends. Gladius feels like one of the often overlooked or lesser mentioned 40k games, but what it offers is a strong 4X strategy game.

I always loved the Battlefleet Gothic miniatures. Despite their small size they were always packed full of detail and looked amazing. When the video game adaptation of the 1999 tabletop game was announced it was a bit of a no-brainer really. That being said the first Armada game was just ok.

However, the sequel has taken that formula and built upon it to deliver a bigger, better and more ambitious game than before. Featuring 12 playable factions – with each ship recreated in fine detail. You can dive into epic-scale space naval warfare as you command some of the biggest and toughest fleets across three dynamic campaigns.

With refined gameplay elements, bigger battles to engage in and improved multiplayer modes, Armada 2 has delivered a stellar game that stands up to the tabletop version.

When it comes to Warhammer 40k PC games there certainly is an excellent variation to choose from. Whether it’s the fast-paced action of a shooter you’re looking for. Or the tactical nuance and a slower pace of the turn-based strategy games, there certainly is something for everyone. Getting to play with all the iconic characters from the stories and use all the fantastic and imaginative weaponry in video games is a treat for all those people who either used to or still do collect and play the tabletop versions.