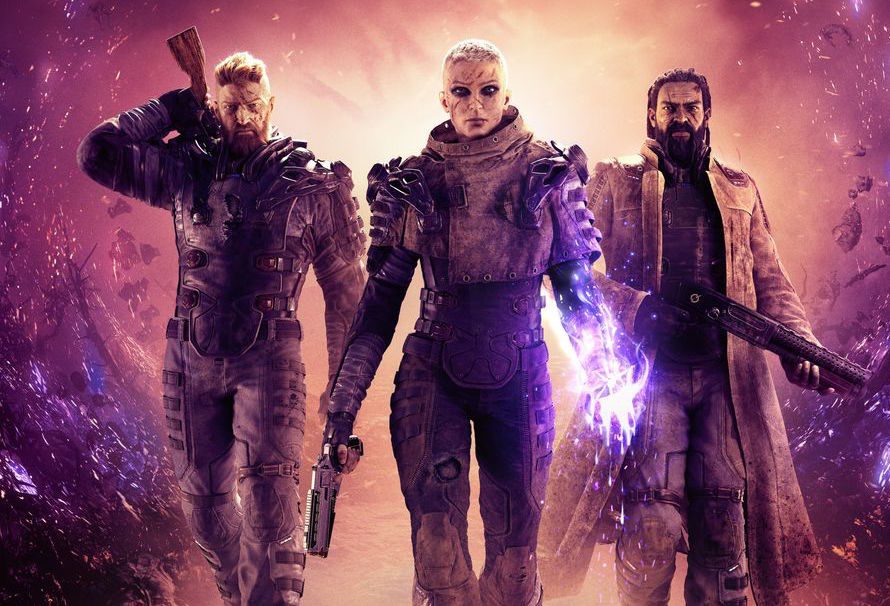 Published by Square-Enix and coming from the same immensely talented bods that brought us Gears of War: Judgment and the furiously insane shooter Bulletstorm is Outriders, a beautifully framed co-operative RPG loot shooter set against the backdrop of a grim, stylish and ever-evolving nightmarish world. Already looking like one of the most anticipated genre efforts of the year, here are some darn good reasons why you need to keep Outriders in your sights.

If you’re finding yourself a little saturated by the relentless saccharine and fruity hues of loot shooters such as Borderlands, and to a lesser extent, Bungie’s Destiny, you’ll be intrigued to discover that the saga of Outriders unfolds across the planet of Enoch; a distinctly hellish and nightmarish domain that lingers long in the memory.

In the pursuit of an enigmatic anomaly after fleeing a dying Earth, players will tear across the rocky hellscape of Enoch, bearing witness to its denizens hanging from rotting trees, massive obsidian structures that stretch up into the sky and massive gaping, abyssal chasms. Pandora, this is not.

Outriders Comes From The Same Nutty Folks That Gave Us Bulletstorm

Developed by People Can Fly, the same talented polish outfit that blessed us with the first-person shooter insanity of Bulletstorm, Outriders wears its shooter heritage brazenly on its digital sleeves, with the sort of fast, furious and ear-thrumming shooter action that would make DOOM studio id Software blush.

Enjoy fast-paced, hyper-violent shooters? Then Outriders could very well be your huckleberry.

Sitting at the core of Outriders is the concept that after coming into contact with a mysterious anomaly, players have somehow ascended to a highly capable state of being known as the Altered.

More than just a funky name, joining the ranks of the Altered empowers players in a number of devastating ways, allowing them to manipulate elemental forces such as fire and electricity as well as more exotic energies such as time and space. Simply put, if you thought that the only way to wage war in Outriders is through firearms, you’re in for quite the surprise.

Talk Poop, Get Shot (Or Something)

Unlike other seemingly comparable genre stablemates such as Borderlands 3 or Destiny, Outriders takes the RPG aspect of its design a little more seriously than just piling a bunch of experience points into various skill trees.

Much more akin to the famed efforts of BioWare, such as Dragon Age and Mass Effect, Outriders possesses a branching dialogue system that allows players to pick from a number of different conversation choices. Not only that, but players can also opt to ignore conversations completely and just, well, shoot folk in the mug too. That’s still diplomacy of a sort, right?

Leveraging its setting to maximum effect, Outriders provides players with a trio of very different classes to play as, with each possessing unique cooldown based skills and falling into the sort of role-based categories that fans of other similar titles will surely recognise. The aptly named Devastator fills out the role of Outriders tank class, placing a premium on survival and high damage that is reflected in the Golem rock skin ability and a far-reaching, Area of Effect earthquake power. Additionally, the hugely damaging Gravity Jump ability can also hurt a single foe while causing a knockback to surrounding enemies.

Elsewhere, the flamboyant Trickster is perhaps the most intriguing of the class line-up. Boasting not just a range of appropriately murderous sword attacks, the Trickster can also employ an exotic form of time magic that allows them to not just imprison foes in a time bubble, but freeze their projectiles in mid-air too – allowing the Trickster to fulfill something of an unorthodox, but effective support role.

Finally, the long-range, damage-dealing Pyromancer is very much the ‘glass cannon’ of the three. Able to conjure barriers of flame and use intense heat to immobilise enemies, in the right hands the Pyromancer could be a devastating addition to the team, neatly increasing overall damage output whilst disrupting enemies to allow the other two classes to go in for the kill.

In many traditional shooters, replenishing your health can very often be a somewhat laborious act of retracing your steps through the carnage as you hunt for missed medical kits and other such consumables. In Outriders, however, your path to recovery is refreshingly different depending on which of the three-class types you play.

Both Devastators and Tricksters replenish their health for each foe that they defeat in close combat, providing each of these classes with a substantial amount of frontline robustness as a result. Meanwhile, the long-distance favouring Pyromancer has a healing mechanism that plays to their strengths too, providing health for each enemy killed under the Pyromancer’s mark.

With its role-based class structure and a myriad of main story missions, side missions, other objectives and eventual endgame to complete, Outriders is a title that has been designed with cooperative in play since day one.

Supporting drop-in and drop-out play, Outriders provides an avalanche of content for players to get stuck into, requiring effective team-working to get the job done. Though hardly preventing solo play, Outriders is one loot shooter that is arguably better enjoyed with friends.

Unlike similar titles such as Destiny or Tom Clancy’s The Division, Outriders completely eschews the live service model that its peers seemingly enjoy. This means that Outriders not only has no loot boxes or microtransactions but also that it will be feature-complete from day one.

In an era of overly ambitious and frequently underdelivered content roadmaps, Outriders willful ignorance of the status quo is arguably a breath of fresh air that perhaps other franchises would do well to embrace.