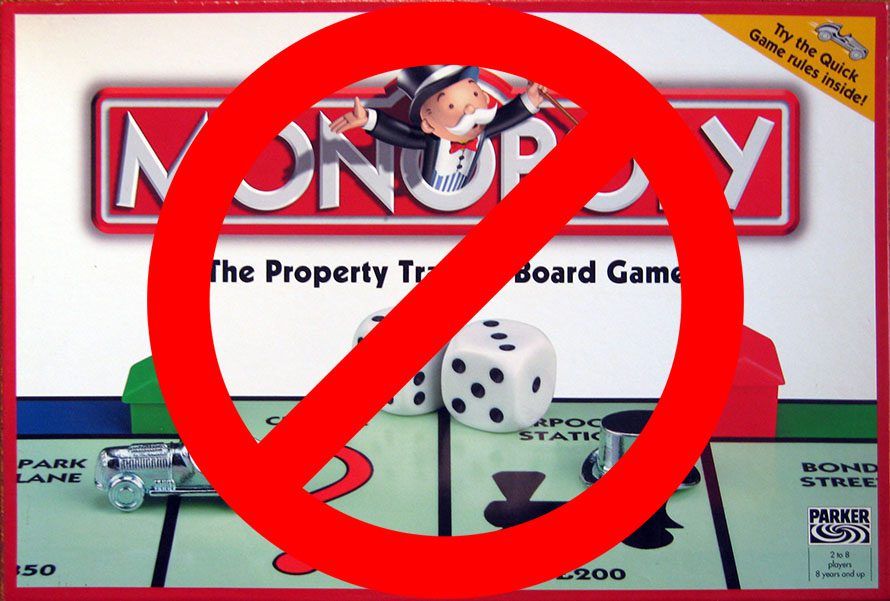 Christmas. Picture it. Eating, opening presents, watching that DVD your Nan got you. You’re not allowed to go play real games, so you have to settle for a board game to ‘be social’. What board game is that? The only one that exists, of course! Monopoly.

Monopoly can burn in hell.

Not only is Christmas supposed to be about joy and giving, but games are supposed to be about escapism and simulating something that isn’t real for fun. Monopoly simulates…monopolies which force people to become blood-thirsty capitalists and destroy their humanity for the sake of more funny-coloured money. Just like in real life. It’s too real, it’s too horrid, let’s reinvent the Christmas board game.

Have you played Risk? Of course you haven’t, because you haven’t got 6 hours and an affinity for tiny, monochromatic soldiers standing on a incredibly realistic (read: boring) map of the world. Enter my preferred version, Small World. Taking the territory holding mechanic from Risk and throwing everything else on the bonfire, Small World has a collection of fantasy races to choose from, that will be queued up with a randomly selected trait, meaning few games are ever the same. You think your Alchemist Undead will rule supreme, but actually your mum is finding surprising success with her civilization of dragon-wielding Halflings. Whoever gets the most gold by the end of Turn 10 wins! There’s also 2 double-sided boards, so it’s different whether there’s 2, 3, 4, or 5 players.

GMG Tip for crushing your opponents: Since you’ll get through multiple civs, try to line them up intelligently. Great starting races are ones that can remain untouched for the longest time like Tritons as they can take the sea tiles, as well as any race which grabs the ‘sea-fearing’ trait. Then transition into Undead or Sorcerers who can get self-replicate so they’ll last a good long time.

You’re cooped up inside a house, it’s cold and dark outside, task distribution and disagreements are commonplace and everyone’s nerves at getting high. Time to play a board game that will snarkily compare Christmas time to trying to survive a zombie apocalypse! Pick a character and do things like make repairs and improvements to your hideout, go on raids to get more supplies, but hark! Each character has their own objective and sometimes one will be a saboteur who wins the game when everyone is dead. So a bit like monopoly really but it’s death by zombie and not financial ruin.

GMG Tip for crushing your opponents: Try to balance your own secret objective with being a part of the team. Also there is no game-defined leader so feel free to act incredibly confident at all times to get your own way and order people about.

King of Tokyo (or New York)

Pick your Kaiju (giant monster) and wreck your opponents and hold the city of Tokyo or New York. The first Kaiju to get 20 points wins the round. You can get points by holding the city, but watch out! Whilst you’re holding the city you can’t heal, and all other Kaiju attacks are coming straight at you. You can save up energy to upgrade yourself, but really the game is about joining together to fucking kill your cocky brother who keeps sitting in Tokyo racking up points and taking potshots at you with his new atomic breath. It’s not very complex, it’s fast and with a few good dice rolls the end result can be surprising.

GMG Tip for crushing your opponents: Read your opponents, if they baulk at taking any damage, sit in Tokyo and attack them over and over, all your attacks from within the city hit all opponents, so it’ll force them to be passive and spend all their time healing. Meanwhile you’re getting 2 points a turn at least, more if you roll well.

Build your railway empire across the United States to win this lovely game. This is similar to Monopoly as it has railways and building, but there’s no grinding your beloved Grandpa into crippling debt, you simply win if you’ve connected the most routes between cities by the end of the game. Collect and play different coloured trains to build route segments, and balance your turns between building furiously and patiently collecting train cards to lay down those point-spewing long routes.

GMG Tip for crushing your opponents: Try to get the tickets that represent routes you’re already planning on working on to be the most efficient, and if possible get a train that goes to one after the other. You get points for each ticket you complete and deducted for those you don’t, so stack up as many tickets as possible that are in your ‘area’.

Be the King of Wood. I actually haven’t played Settlers of Catan (or, to give it its street name, C’tan), but the nerds seem to love it a lot, and it doesn’t seem that complicated at all. Give it a shot, let us know how it goes.

GMG Tip for crushing your opponents: Here’s some tips I found on the internet.

Party card game. This is where I would suggest Cards Against Humanity and you would sigh because the concept of your family saying unusually rude things has gotten stale. Instead, Funemployed gives each player the task of pitching themselves for a job using a hand of traits. Yes you will have to pitch why you would be a good porn star to your auntie and explain why you’ve picked ‘good cricketer’, ‘complicated love life’ and ‘owns inflatable sword’ as your traits because that’s all you had in your hand. But if, like me, you enjoy a bit of improv you can win just by being creative and ludicrous, just like in Cards Against Humanity.

GMG Tip for crushing your opponents: Do an impression of the employer’s favourite comedian pitching the job, wins every time.

Be a wizard and kill other wizards by crafting spells! Each player has a hand of spell components and will take turns making spells that have 3 parts. Some go for all out damage, some heal, some can target that one wizard who is really annoying you (again, cocky brother). The artstyle is great/really gross, and will go down a right treat. Everyone will appreciate it when you win the game by playing the Testikill spell. Despite dice rolls dictating how much damage and healing your spells do, there is some strategy in gaining Treasures and choosing who to target. Or just yolo and do as much damage to everyone as possible, all the time.

GMG Tip for crushing your opponents: You can leave out cards to make sure you get the first turn, since the speed of the spell sets who goes first. 2-card spells always beat 3-cards, and 1-cards always beat everything else. There’s a spell card that has the highest speed value, so keep that for those last 1v1 moments where 1-card spells are common.

If you’ve got a board game you’d like to replace Monopoly with, let us know so we can all crush that game out of existence forever.