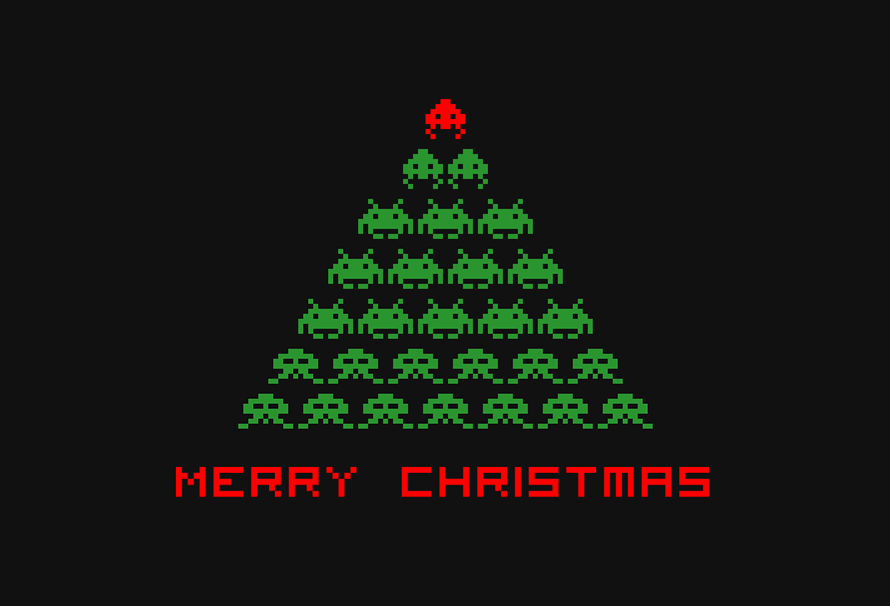 And…. relax: it’s Christmas. Christmas, of course, brings myriad joys, but there’s a particular aspect of the holiday season that gamers love: it’s a rare period in which the hurly-burly of working life is put on hold and, for once, we’re left with some time on our hands. A period, in other words, to play all those games which came out in 2017, but we simply didn’t have the time to immerse ourselves in.

So, once you’ve got to the stage when you never want to see anything with turkey in it ever again, the time will have come to fire up your PC or console, and hunker down for some serious gaming. Now, there’s no question that 2017 was a very fine year for games indeed: here’s our selection of the 10 games which came out this year that you absolutely must play.

PUBG – as everyone calls it – was the undisputed games phenomenon of 2017. Its concept is simple but original: 100 players are parachuted onto an island, where they must scrabble around collecting the necessary weapons and objects to allow them to survive. But as each round progresses, the map contracts, bringing surviving players together; the last person standing has the immense satisfaction of being declared the ultimate winner.

Although it emerged from the modding scene, rather than some lavishly funded studio, PUBG is unbelievably intense, addictive and compelling. It has just arrived on the Xbox One (sadly, it looks like it will be ages before it reaches other consoles), but it’s currently best played on the PC. As it’s the game that everyone is talking about, you simply need to check it out.

The Legend of Zelda: Breath of the Wild

Haven’t yet invested in a Switch? Why on earth not? Firstly, Nintendo’s amazing transforming console/handheld is a genius piece of kit, and secondly, the only excuse you need for buying one is the existence of The Legend of Zelda: Breath of the Wild. Not only is it most people’s game of the year for 2017, but it looks set to feature on those lists of the best games ever in years to come.

We all know how brilliant the Zelda games are, with their RPG mechanics allied to cute plots and a general vibe that is designed to appeal to all ages. But Breath of the Wild marks a step-change for the Legend of Zelda series. It has a proper – not to mention utterly beautiful and beguiling – open world, which is a joy to navigate as Link, with his ever-growing collection of abilities.

It’s a huge game, supplemented by excellent DLC and more than anything, its take on the world of Hyrule is the ideal place in which to lose yourself and forget the trials and tribulations of the real world for a while. Every gamer should play it.

With a new Assassin’s Creed game coming out every year, a certain amount of disillusion was threatening to set in regarding the historical action-adventure franchise. But credit to publisher Ubisoft: it gave the series a year off, which meant an extra year in development for Origins. That policy paid off, because Origins marks a massive return to form.

As the name suggests, it’s an origins story – detailing the beginnings of the eternal struggle between Assassins and Templars. It takes place in Ancient Egypt – 48BC, to be exact – so characters like Cleopatra, Ptolemy, Pompey the Great and Julius Caesar himself feature.

A cleverly revamped combat system makes it more action-oriented than its predecessors. But perhaps its best aspect is its lush and activity-packed open world, which is huge and startlingly convincing. It offers a great facsimile of what Ancient Egypt might have been like when its pyramids and tombs were shiny and new (obviously, tomb-raiding looms large in Origins), and places like Alexandria’s great library still existed.

Everybody loves Mario. But full-blown, original Mario games don’t come around very often. Super Mario Odyssey is arguably the most significant Mario game since 1996’s Super Mario 64. As ever, Bowser has kidnapped Princess Peach; Mario must chase him and his cronies across 14 open-worlds, collecting Moons in order to power up his airship, the Odyssey.

This time around, he has a magic cap called Cappy, which he can chuck at enemies and objects, either to defeat them or to temporarily possess them and acquire their abilities. It’s every bit as mad, endering and hilarious to behold as you would expect from a Mario game. And it’s huge, with loads of new puzzles, activities and even a bonus world opening up when you finish the main story. Would have been 2017’s game of the year by a country mile, had it not been for The Legend of Zelda: Breath of the Wild.

This PlayStation 4-exclusive developed by Guerrilla Games simply oozes class. It’s an action-RPG, following the fortunes of Aloy, armed with primitive ranged weapons and spears, in a gorgeous-looking open-world in which giant dinosaur-like robots run riot. It offers a post-apocalyptic scenario, in which humans have regressed to primitive tribalism.

Horizon: Zero Dawn looks fabulous, and its combat and action feel fresh and innovative. Guerrilla Games also nailed its interlocking systems, so its game-world seems to live and breathe, with all manner of emergent behaviour. Another huge game in which to bury yourself, it’s a must-buy for PS4 owners.

This action-RPG seemed to emerge with zero fanfare, but it swiftly generated a massive impact. Developed by the legendary Platinum Games (of Bayonetta fame), it has plenty of that slightly bonkers, stylised vibe in which Japanese developers specialise, and generally feels quite unlike any other games that are out there.

While it adheres to many action-RPG conventions, it also mixes in unexpected elements, such as side-scrolling shoot-em-up sequences. It has a great story, detailing the struggle between a dwindling band of humans and the machines that are threatening to take over. And its combat is irresistibly smooth and fun.

Studded with excellent boss-battles, it also boasts multiple endings. If you’re looking for something a bit different, which your games-playing mates might not have come across, then Nier: Automata fits the bill perfectly.

In 1992, Wolfenstein 3D defined the first-person shooter as we now know it. Fast-forward to 2017 and while Wolfenstein II: The New Colossus contains some of the first game’s DNA (such as the need to collect shards of armour and scavenge enemies for ammo), it also represents the state of the art for FPS games.

It has a great alternative-history premise, imagining that the Nazis won World War II and now occupy the USA. As it takes place in 1961, the Nazis have been in power for a while. Luckily, you’re here, in the guise of the (literally) indestructible BJ Blazkowicz, to galvanise the resistance and fight back against an ageing Hitler (who has a cameo role)and his henchpeople.

Among other things, Wolfenstein II: The New Colossus is a genuinely funny game: you can tell that developer MachineGames had an absolute ball imagining what a Nazi-occupied 1960s America would be like. There are all manner of references to 1960s culture, and some brilliant high-tech, Nazi-style weapons and gadgets.

But above all, it offers high-octane, super-slick first-person-shooter action of the very highest order. A must if you’re fond of proper, single-player FPS games – and it’s even coming to the Switch next year.

2017 was a great year for driving games, with Sony and Microsoft releasing their high-budget big-guns, Gran Turismo Sport and Forza Motorsport 7. But our favourite driving game of the year was developed by a small, maverick London outfit called Slightly Mad Studios, and was partly crowd-funded. Project Cars 2 couldn’t have been more of an underdog.

Nevertheless, it features incredible car-feel and plenty of features that other driving games can only dream of. Such as tracks that evolve during races as rubber is laid down, and tyres which degrade as you put the laps in.

Project Cars 2 aims to recreate the experience of real motor-sport, so it’s more of a simulator-style game, but you can crank up the driver-aids if you don’t have the natural ability of a Lewis Hamilton. Its Career mode really gives you a sense of what it would be like to make a living from racing, making Gran Turismo Sport’s single-player campaign feel disjointed and insubstantial. If you take your racing games with deadly seriousness, you’ll love it.

Bungie’s ambitious attempt to merge first-person shooter gameplay with the sociability and epic questing of an MMO hadn’t quite gelled in the original Destiny when it launched in 2014. But the developer, previously famed for making the Halo games, tweaked it and honed it. And Destiny 2 finally enabled us to realise what the franchise is all about.

It has a great, meaty single-player campaign to draw you in, but it’s what happens when you’ve finished that which will really get you hooked. With an ever-expanding roster of co-op Strikes and epically long and tricky Raids, plus the ever-present Crucible offering lashings of player-versus-player action, you’ll find yourself playing it as if it was an MMO, assembling a team composed of your mates. If you like to play games with other people, it’s just the ticket.

The second instalment of Electronic Arts’ transplantation of Battlefield’s gameplay to the Star Wars universe arrived with a loot box controversy. But the giant US publisher has tweaked Battlefront II to ease those concerns, and anyway, you should ignore such considerations, since it’s infectiously brilliant to play.

This time around, Battlefront II even has a decent single-player campaign, which is being expanded via DLC. But it’s at its best online, with an ever-shifting selection of epic Star Wars battles in which to participate – the space-battles are noticeably more enjoyable than those in the original game. Or you can take part in more intimate scenarios, with smaller bands of Empire and Rebel Alliance fighters taking each other on in team deathmatches and the like. It’s fabulous to look at and super-slick, and should get any Star Wars fan very excited indeed.