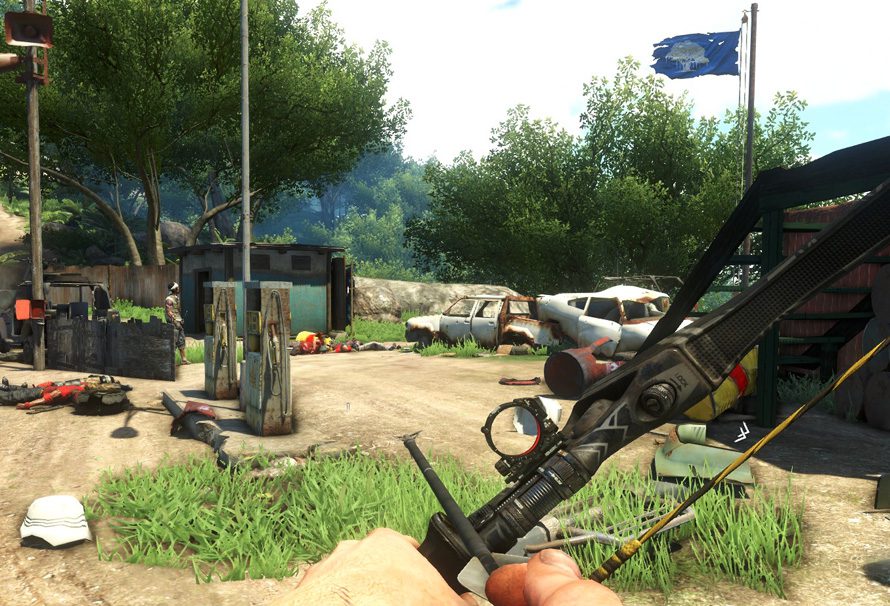 Update: Far Cry 5 is available for preload today, so get it downloaded as soon as you can and then let us know where it fits in the series!

Far Cry 5 is approaching with deadly momentum, so before we look forwards to the future of the Far Cry series it’s time to first look back, back over where we’ve been.

The next step in the Far Cry universe will take us to deadly Montana, home to the most dangerous prey: Americans. And also you’ll get a dog so frankly, this game is looking 10/10 in my view.

But we cannot understand where we’re going until we know where we’ve been, I’m pretty sure I read that on the back of a cereal box once. So let us look back, back into the deep mists of time to say ‘which of the Far Cry games is the best’.

NOTE this is entirely subjective and should not be taken as fact, by anyone. Except in the comments.

The problem with the first Far Cry is the same problem that the first Crysis had, which isn’t surprising given that they’re made by the same company. Both games are great! Until the aliens/mutants turn up.

In Crysis it’s the aliens who ruin the party, in Far Cry it’s mutants. The whole game is great up until that point and then in they come, like angry boars made of mutagens to ruin your fun. They’re just not engaging enemies, they’re bullet sponges and they throw out a lot of the tactics you’ve built up over the preceding half a game in order to become a worse version of itself.

So if you’re going to play Far Cry, and you should, just be prepared that there will be a point when the fun might dry up.

This is a game I just didn’t get along with, entirely for tonal reasons. It shares mechanics with Far Cry 3 – a game I unabashedly love (and you’ll read more on that in a moment), but the ‘jokes’ in Blood Dragon entirely fell flat for me.

Take the tutorial for example; it starts off with a ‘joke’ that making players look around and jump to pass a tutorial is stupid, everyone knows how to do that.

Then it makes you look around and jump to pass the tutorial.

From the get-go the game’s sense of humour drove me up the wall, and that’s the reason its so low on this list. The rest of it is a weird mix of nostalgia and bombastic pseudo-80s themes, and neither of those works for me. So I had to give up on it, which is a shame cos I thought I could always use more Far Cry 3.

tl:dr, it’s the Ready Player One of videogames, references with no context or thought, just HEY REMEMBER THE 80s? the videogame. No ta.

Far Cry 4 did what I wanted from it, it saw a lot of the stuff that Far Cry 3 did wrong and then did better. It also moved the location of the game to an absolutely beautiful place, up in the Himalayas, and made vertical movement easier and more fun.

Easy, it also added a load of new features which just soured the mix a little. For example there’s a tonne of new mission types, such as one where you have to sneak into encampments and deal with guards without alerting anyone in order to free hostages. Get caught, and the hostages might die.

Which is fine on the face of it, stealth is a great part of the Far Cry mix, but part of what I love about the Far Cry games is that it gives you tools to deal with things that go wrong. These missions, and missions like them, ruin that for me.

Added to that there’s a load of enemies which just aren’t fun to fight, they can go invisible and stealth around and throw knives at you and I ain’t got time for that, I wanna shoot a tiger, yo!

It’s really good! Shunned by most as ‘not a real Far Cry game’, it actually does ‘systemic playground’ better than most of the others in the series.

Also you get an owl that acts as magic binoculars, and any game that lets you peer through the mystic owl has to be worth the price of entry, right?

Otherwise known as ‘the one with all the malaria’. Created by legendary game designer Clint Hocking, it’s hard to overstate how impressive this was as a sequel to the original Far Cry. Especially as this isn’t how the narrative is supposed to go, game name gets bought by big company, sequel gets made without original team and then…game vastly surpasses the original in every way? Huh?

With a huge open world to play in and a compelling narrative about post-colonialism, Far Cry 2 is definitely the best Far Cry game.

Jason Brody is a dick.

I’m saying that because it’s probably the first thing you think of when this game gets brought up. Jason Brody is an absolute twat, and that’s why I love this game so very, very much.

See it’s an odd thing to have a game protagonist be an arsehole, but Jason Brody is one, but throughout the game he evolves from arsehole into ‘psychopath’. A normal FPS will have you gun down a million people and shrug it off, Jason Brody learns to revel in it, he exults in murder and never stops to wonder what he’s become. But his friends, his brutalised, kidnapped friends, do notice. There’s a moment where you rescue Jason Brody’s girlfriend and he just starts celebrating at the wild ride they’ve taken, and the massive shootout you just participated in. And she freaks out, because WHAT THE FUCK JASON?

It’s a wonderful moment, and frankly one that more games should pay attention to.

Also tied into that is the utterly beautiful open world, the best bad-guy ever (hello Vaas), and the fun-but-stupid upgrade system (I need a shark skin to hold all my cash), Far Cry 3’s my favourite.

So there you go, definitive proof from me, chief Green Man Gaming opinion-haver. Far Cry 3 is brilliant. Will Far Cry 5 be better? Pick it up now and find out next week!