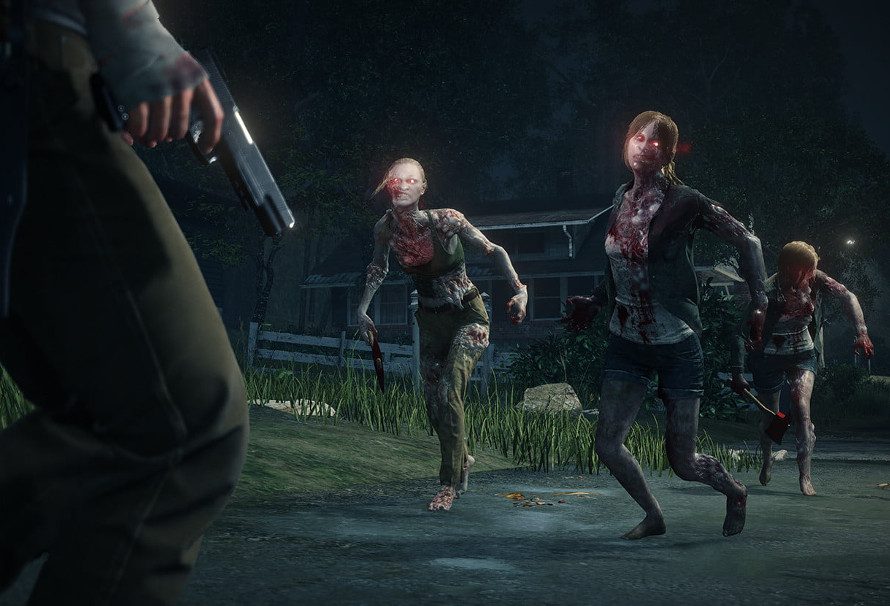 The main surprise in The Evil Within 2 comes when you’re creeping around the swamp coloured fog, scooping up supplies with one arm and slowly opening doors, only to be swallowed by a tirade of darkness. It comes when you sight a monster, devouring a corpse on the other side of barbed wire and when you sneak up and put a bullet through its skull, it comes when you feel completely in control.

As an absolute lover of the horror/thriller genre, there’s nothing better than curling up with a good Stephen King or hiding behind one extended arms whilst trying to watch It Follows. I just kinda wish, I was better with horror. The thing is, I’m too scared. Horror games are undeniably beautiful, is that a strange word to describe them as, beautiful? Because I get swept up in the fear of horror media, I’m not talking about Saw or Hostel, the relentless bloody horrors, I’m talking about the haunting and ghostly demeanour of The Others, the dark and sketchy art in Babadook, the subtly impending horror in Village of the Damned and the raw, explosive horror in The Fly.

However, when it comes to horror games, I enjoy silently moving between puzzles, or the jolting scares that creep from unknown crevasses of games, not horror that relies on the gore, the guts, the dread. It’s games such as We Happy Few, Hello Neighbor, even as far as The Last of Us, when you’re aware of death, but it’s never quite as obvious and bleak as Slenderman looming in the distance, or crouching under a table in Outlast.

The Evil Within 2 is undoubtedly a horror game, but from someone who threw the controller while playing PT, or screamed relentlessly whilst wading through the asylum in Outlast, it’s more than that. Here’s why.

I love, like I’m sure most do, a good workbench to upgrade my weapons. I love carefully choosing which upgrades to go for, with points I’ve picked up in some form along the way. I love going out of my way for these things and that’s where The Evil Within 2 creates a magical sense of purpose in levels which aren’t always strictly linear. After progressing through some stealthy play, I entered a Safe House, which became my base. It was the place where I could craft, upgrade my weapons and choose how I wanted to spend my ‘gel’.

The liquid gel is something you forage from enemies you’ve taken out. At first I thought it was acid, so spent a long time skirting around the pools of green, but no, it’s safe and it is almost certainly worth your time getting. I took time to sneak up on enemies and leave the Safe House to get some kills, before retreating back to spend my well earned take outs.

Levels which don’t restrict you

Although the game is linear, there are some areas which you can explore a bit more freely. You’re definitely not safe in these areas, but as the supplies are so satisfying a reward, it’s worth exploring everywhere, even if you lose some bullets and axes along the way.

In one of the levels, there are a plethora of houses to explore and I enjoyed wading into each one, never really knowing if it’s where I should be, or just because I want them shotgun shells.

The third person perspective is a welcome change in horror games, and although it does let up from the intensity and immersion that some first person horror games have, I enjoyed playing as Sebastian Castellanos and not somebody that I always refer to as myself.

Stealth. Similar to the mechanics in The Last of Us, you can’t waste valuable supplies and playing this way is a great way of getting from A to B, without losing health on the way. There were a few times I wanted to see what would happen if I came charging out my hiding spot, pistol firing. It didn’t go well, granted, but I realised it was the first time in a horror game that I felt at ease enough to do this.

Characters and noises which make my skin crawl

The main monster is utterly terrifying, but I think the noises she makes are 10 times worse and when you’re being chased along a corridor, with the eerie cackles of her shrill voice chasing you, you’ll enjoy the moments when you’re slightly at ease.

The STEM universe is home to a lot of bizarre and grotesque creatures, including a mother force feeding her son, until the ‘food’ spilled out his mouth (had to look away), but it’s those creatures which are a welcome force after boss fights and intense fleeing scenes.

If you want horror, but you want story, excitement and a play style which isn’t dictated to you, then The Evil Within 2 is fast approaching. See you in STEM.