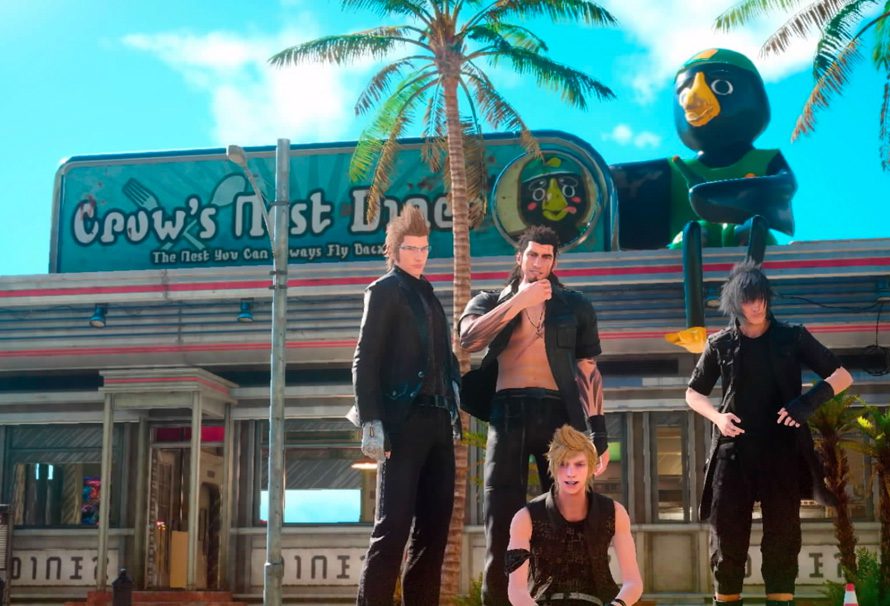 Final Fantasy XV is finally arriving onto PC on the 6th of March, and that means all of you, all my beautiful PC playing brothers and sisters will get to experience the wonders of the greatest road trip you’ll ever take in your life.

You’ll kill beasts, have feelings, explore ruins and dungeons, murder robot after robot, get confused by the plot, understand the plot, go fishing, make food, cast spells, and most importantly just enjoy spending your time in one of the most compelling open worlds ever made.

But that’s all secondary as there’s only one important thing that matters in this game. And that’s who the best boy is.

There’s four of you on the road trip, Ignis, Prompto, Noctis, and Gladiolus.

But there can only be one. One best boy, so here’s the list with 100% infallible reasoning about who the best boy is in the game, and why it’s <SPOILERS>.

Let’s start at the bottom! (Also there will be spoilers for the game here).

AKA the walking slab of beef, AKA the noodleman, AKA captain grumpy, AKA who needs a shirt it’s not that cold out.

Gotta make it clear here: none of the boys are bad, but Gladiolus is the worst of the boys. Simply because he’s a bit joyless; he’s a grumpy guard who’s got your back but that’s about it. Even his non-combat ability is a bit weak. Putting up tents? Yeah mate, level that up, tell me all about how tough it was to be tentmaster.

The only real ‘personality’ he has is expressed through his sister, his love of noodles (which is a promotional tie-in, but cute nonetheless), and not wearing a shirt.

He’s handy in a fight cos he gets the big swords but other than that he’s just a lunk and I ain’t got time for lunks!

What’s worse is during the late game he turns into a bit of a prick, giving Noctis a hard time just when he’s going through, I dunno, some POST TRAUMATIC STRESS. Dude! Give it a day or two!

Probably the largest issues with the plotline in Final Fantasy XV come from the lead character. For large parts of the game he just seems to not be engaged with what’s going on. Your home country’s been invaded? Ah whatever. Dad might be dead? Oh well. Demons? Hey who cares.

I mean he even manages to make Squall look like he’s engaged in his own story.

That does change, and Noctis has moments of vulnerability as you progress through the game and eventually matures into a hero you can be proud to control. That combined with his skillset and teleporting make him brilliant to play, the game is radically different to previous Final Fantasy games in how it controls and plays out, and the way Noctis handles makes every fight tense and fun.

Basically when he grows a beard, I like him a lot more.

Ignis is the stuffy British one, the one who’s about decorum and comporting yourself correctly. That makes him fun to be around, fun to poke fun at, and his dry sense of humour adds loads to the feeling of four friends on a roadtrip.

His combat abilities are great too; eventually he gets some of the best abilities in the game.

But that’s not what makes Ignis the second best.

What makes him second be<THAT’S IT! I’VE COME UP WITH A NEW RECIPEH>st. Ah yeah, that.

Basically he spends most of his time not worrying about battles or the larger plot, Ignis just wants to find something better to cook with. Half way through many battles the combat will stop and the camera will zoom in on him as he announces he’s discovered, right there, baked beans or something.

It’s brilliant and never anything less than perfect comedic timing.

Combine that with the frankly gorgeous food he whips up for you every time you camp out and you get the picture: Ignis is ace.

If Gladiolus is ethos, Ignis is logos, then Prompto is pathos.

He’s the heart of the gang. He’s the little boy who isn’t sure that he belongs. He’s the joker that’s having a constant crisis of confidence. He’s the boy who wants to try harder, be better, and prove himself to all his friends.

It’s normal to meet Prompto and be annoyed, he’s not great in combat and the photos he takes are pretty terrible.

But slowly you learn how to use him better in fights, he unlocks some frankly stunning moves, and he gets rapidly better at taking snaps.

Then you have a conversation where he just opens up to Noctis, you learn all about how he tries, and he fails, but he keeps on trying. He doesn’t believe that he belongs with you, heroes all, but he’ll keep trying until he does.

I mean after that how can you not love him? Prompto is us, he’s the little kid that could. He stands with giants even though he isn’t one, yet.

Prompto is the best boy, and I’ve got a tear in my eye thinking about him even now.

Final Fantasy XV is out on the 6th of March, and you can argue with me about which boy is best on our community buzz!